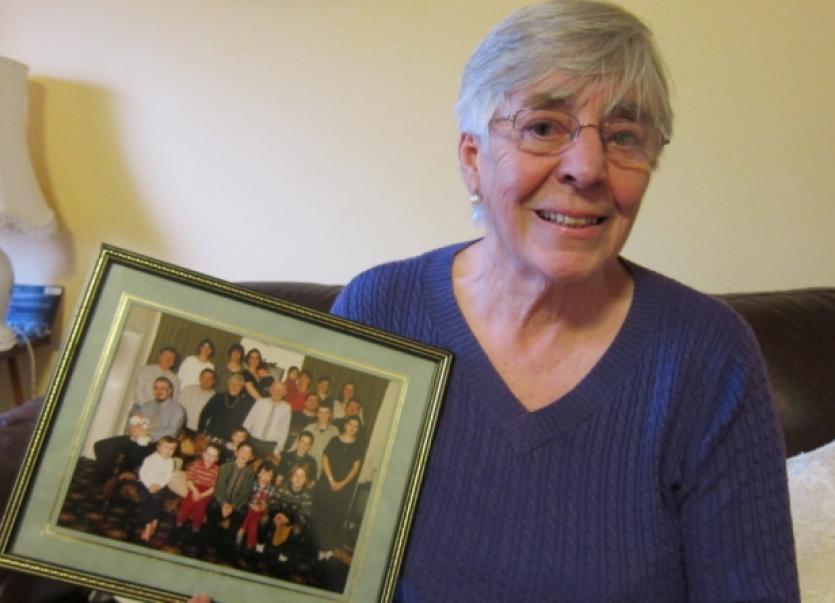 Maureen Walsh has a vivid memory of walking home from a dance at The Swansea in Greencastle one winter night 56 years ago.

Maureen Walsh has a vivid memory of walking home from a dance at The Swansea in Greencastle one winter night 56 years ago.

Exhausted from having been up the night before with a neighbour who was ill, she’d managed to avoid a second dance with a persistent young fellow by promising she’d go to a film with him on Friday night.

“On the way home,” she said, “I was smiling to myself, thinking, ‘He doesn’t know me or where I live and I don’t know him…forget all about it!’”

Come Friday night and there was a knock at the door.

“I went to the door and saw the strange man standing there! He said, ‘Maureen, did you forget about our date?’ I asked him how he knew my name and he said, ‘If only you knew the trouble I’ve been through to get here!’”

As it turned out, the young fellow – a lighthouse technician named Michael from Kerry who was in the area to service Shroove Lighthouse – had first seen Maureen at Mass in Ballybrack Church several weeks before and thought, “I’ve got to meet her.” Two Sundays in a row, however, she’d disappeared before he had a chance, having left through a side door to visit her father’s grave.

“He took a fellow to Mass who was able to tell him my name!” Maureen said. “To make a long story short, we were married 14 months later, on 13th February, 1958, and had 42 lovely years together, with six daughters, six sons-in-law, twelve grandsons, six granddaughters, one grandson-in-law, two granddaughters-in-law, and four great-grandchildren.”

Last March, fifty of Maureen’s family members gathered in Greencastle to help her celebrate her 80th birthday, a joyous occasion with one exception: the absence of Michael, who died in 2000. Guests at the party included two nephews of Michael’s who’d travelled up from Kerry to be there.

If she had one lesson to share with younger women at this stage in her life, Maureen said, it would be about the importance of nurturing strong family relationships. “It’s important that families keep in touch with each other,” she said. “The family is very, very important…I think it’s the most important thing in life. You know that you can lift the phone at any time and they’ll be there.”

Maureen’s own experience of family began with growing up as the oldest of nine children. “There was never a cross word between us,” she said. “That’s the way we were brought up. My mother was from a large family, too.”

Maureen learned early about the personal sacrifices that commitment to family can entail, having left school at the age of 13 to take up paid employment after her father became debilitated by rheumatic fever. “You didn’t know any different, it was all part of life,” she said. “But I did love school and I cried quite a lot when I was told I couldn’t go back.”

Maureen was employed for five years as a house cleaner in Greencastle before moving to Scotland, where she worked first as a medical receptionist and then as an assembly worker at a Singer sewing machine factory, a job she loved.

“I was at Singer for two years when I got a message in June 1953 telling me my dad was really ill,” she said. “I returned to Ireland and he died on 22nd September. I was devastated when my father died. My mother went to pieces.”

Maureen stayed on in Greencastle after her father’s death, helping her mother to manage several lodging rooms in the family home for five years before marrying Michael at the age of 25 and starting a family of her own in the town. The couple had six daughters: Elaine, Geraldine, Mary, Michelle, Sharon, and Caroline.

Michael’s work as a lighthouse technician, however, presented some challenges in their early years together. “My husband would have been out to some terrible places!” Maureen said of the rocky islets where he would be stationed for six weeks at a time, with no means of contacting the mainland.

Family, and especially her mother, played a huge role in helping Maureen to cope during those years. “My mother was my saviour,” she said. “If I got ill or was having a baby, she was always there for me. The girls just adored her.”

Maureen smiles with joy at the mention of her daughters, who it’s clear have taken her lesson about the importance of family very much to heart, now calling regularly to her house with families of their own. “I’m very proud of all six of them,” she said. “They phone me seven days a week.”