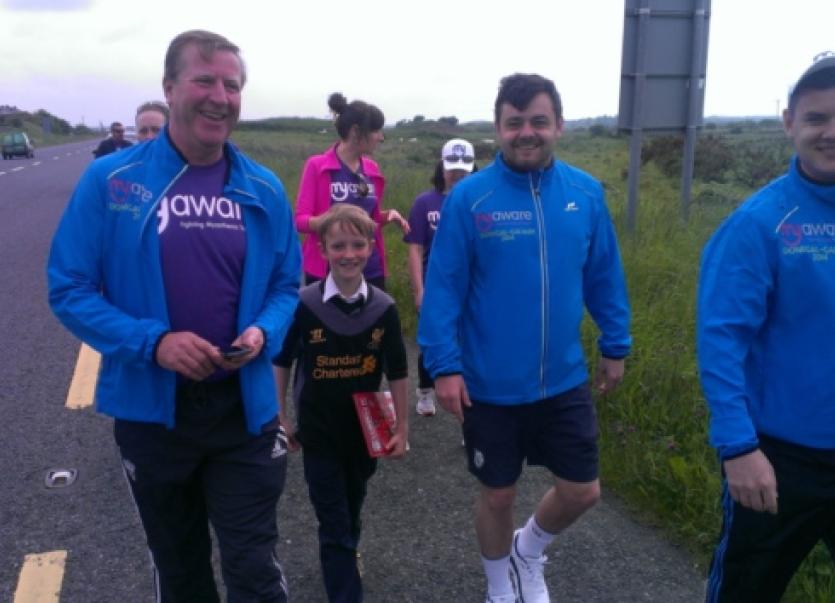 Whelan, with his wife Elaine and a host of friends, including Danny O’Carroll who plays ‘Mrs Brown’s Boys’ star ‘Buster Brady’ and Laurence Kinlan who plays ‘Elmo Creed’ in ‘Love Hate’, are walking part of what has now become the ‘Wild Atlantic Way’ route, raising money and awareness for the Myaware charity.

The group stayed in the Great Northern Hotel in Bundoran lalst night and, despite their high profiles, could not have been more accommodating to guests and well wishers.

Myaware funds research and support for people who suffer from the autoimmune, muscle weakening disease Myasthenia Gravis (MG). The charity is very close to Ronnie and his wife Elaine’s hearts as their 28-year-old daughter Elizabeth suffers from MG.

Walking and talking just outside Bundoran this morning on the first leg of a weekend charity walk that will finish in Galway, Whelan told the Democrat: “Elizabeth is doing great now. Once she was diagnosed it could be controlled and that’s important but now we want to help by raising awareness and money for the great work being done to help people with MG: “The money is needed because we don’t know who it affects or why it affects people, so the money is needed for research and to provide specialised nurses in regional locations such as Donegal or Cork and not just Dublin so people don’t have to travel.”

Elaine and Ronnie have three daughters, Georgia, Amy and Elizabeth but only Elizabeth has MG. When I caught up with Elaine who was leading the ‘charge’, she explained that the charity work is vital: “I just want to thank all the people who get involved. MG is something very few people know about and we feel it important that we raise awareness and of course assist in generating funding for research, but we also want to provide comfort and support for people with MG.”

Speaking to the Democrat as the group walked from Bundoran to Tullaghan, Ronnie Whelan was happy to cover a wide range of topics from vague memories of playing against Finn Harps as a 17-year-old in Balybofey to why he understands why Roy Keane might want a club job at Celtic. He also gave his views on Seamus Coleman, who he described as “remarkable”.

Commenting on Roy Keane’s possible move to the Celtic job, Whelan said he hoped Roy would “see (the Ireland assistant job) through a bit longer,” but he added that it may well be that Roy Keane wants to have another crack at club management which was understandable too. He said that the Celtic job was a huge one, and gigs like Celtic don’t pop up that often.

Whelan, who recalled playing in Ballybofey as a 17-year-old against Finn Harps, talked about Fran Fields and how he got to know him in the ireland international set up.

On internationals, he said he was really impressed with Donegal man Seamus Coleman and he felt former Ireland manager Giovanni Trapattoni had “messed him about” slightly at the Euros by not giving him games.

“Seamus Coleman has been remarkable. I think Trapp messed him about a fair bit in the Euros. His family and many others had hoped he would be playing a lot more, but it didn’t happen. I wonder if there was a doubt about where he should play then. Was he a right back or a right midfielder? Was that an issue at the time? I’m in no doubt that he’s a right back and he does very well there. He has matured over the past few years, in his decision making, when to cross, when to go forward, when to defend and that comes from experience.

“I don’t know Seamus personally but he seems to have a lovely way with him, nice temperament from what I hear and very calm.”

Asked if Liverpool had left a Premiership title behind them, Whelan told the Donegal Democrat: “Yes I think they did in the end. It was a bit of inexperience from them in terms of how to see it out, how to win it. (Manchester) City have been through it and they won it, they knew how to go about winning. Liverpool just fell short.

“I don’t think the players were surprised to be at the cutting edge and near an outright Premiership win but maybe they got a little bit excited when they got so close, two games to go, it was a big ask.”

Whelan said he was fairly certain Liverpool would keep the Uruguayan genius Luis Suárez at Merseyside for at least another year: “I think they will keep Suárez for this year and he will have a look to see if they are bringing in better players. He wanted the Champions League (to play in) and now he has got it.”

Asked about the level of ambition the Republic of Ireland team have or should have, he said he was impressed with the approach they took to the recent Turkey game: “You don’t have a Johnny Giles, your Liam Bradys or your Paul McGraths. Trapp for a while favoured a style of football which he said fitted what he had, but looking at the recent game against Turkey and the brand of football they played, that was an eye opener. Turkey could have been down to ten men after five minutes and we would have won that game, maybe 4-0. What I am seeing now is an Ireland team playing a better brand of football; they are certainly trying to play a more expansive game. There are just some things that need to be tweaked but they are getting there and becoming a good team,” he said.

LIFE NOW AND THE MEDIA

Reflecting on his role now as a media pundit, Whelan scratched his head, smiled and admitted it wasn’t exactly planned: “When I went in to Southend, I played for a year and became player manager. I got into the management side for a few years. After that I went abroad to Cyprus and Greece and managed teams over there for a few years and I came back because I wasn’t enjoying it.

“I sort of stumbled into the media thing. Someone asked me to do an interview for the radio. I don’t know what was the first one and it just went from that. I’ve worked for RTÉ and TV3.

“You get one chance and you get into it. People then started ‘phoning me up to do a piece here and there and it just snowballed from there to be honest. There was no big plan as such.

“I love it. I get to see lots of big matches like the Champions League this year and you are in places like Madrid, Paris or Munich and that’s not too bad,” he says with a very wide grin on his face.

As I left Whelan and his troop of merry men and women they were just crossing the border from Donegal, to walk through Leitrim - the shortest county coastline in the country - and then to Sligo.

A happy bunch, if you see them on the road today, give them a toot of your car horn - they are, like Whelan and his lovely wife Elaine - fantastic people doing something very special this Bank Holiday weekend.

May the wind be at their backs all the way to Galway.