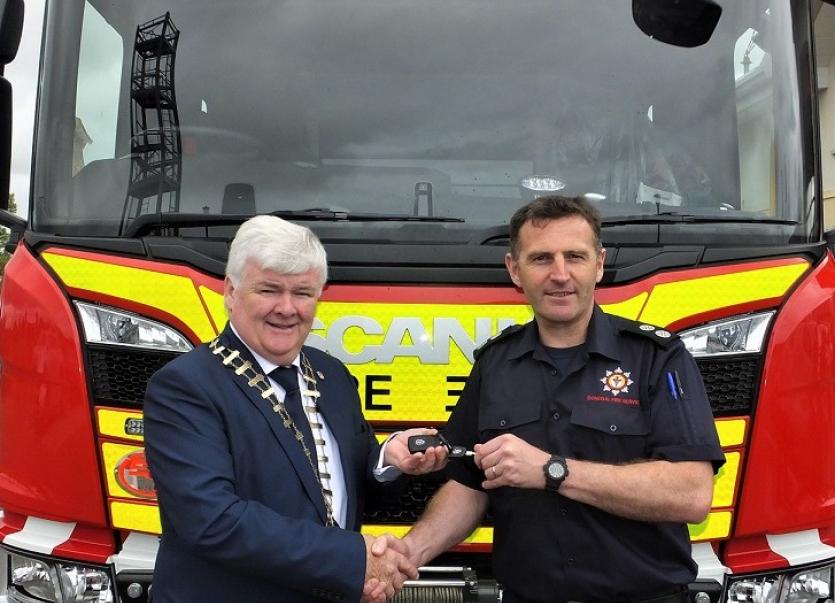 The new Class B fire engine  which cost €450,000 will replace the 1998 Volvo fire engine which was previously based at the Gaoth Dobhair Fire Station.

The new fire engine will enhance the ability of the Gaoth Dobhair Fire Brigade to deliver the operational fire service it provides to the community in Gaoth Dobhair, according to Chief Fire Officer, Joseph McTaggart.

The new fire engine is  one of the first to be procured directly under the Office of Government Procurement’s new Framework Agreement which was set up to  supply government agencies with new Class B Fire Engines.

Under this new Framework Agreement the new fire engine was supplied and delivered by Sídheán Teoranta a long established fire engine manufacturer from An Spidéal, Co. Galway.

The fire engine is based on the latest Scania P320 chassis which has an intergrated crew-cab providing seating for up to eight fire-fighters.  It comes with an integrated water tank coupled with an on-board Godiva Prima main pump, which is capable of pumping out 3,000 litres of water per minute at an average pressure of 10 bar.

It comes equipped with a Compressed Air Foam System [CAFS], a 1,200/min portable pump, a number of multi-stage ladders, a number of hoses, nozzles and a front-mounted winch. It is also equipped with the most up-to-date emergency lighting and high-visibility markings to ensure better safety for fire-fighters and for members of the public while the fire engine is responding to and attending an accident.

The new fire engine will have an operational life span of approximately 20 years and it is anticipated that it will respond to approximately 45 calls per annum.