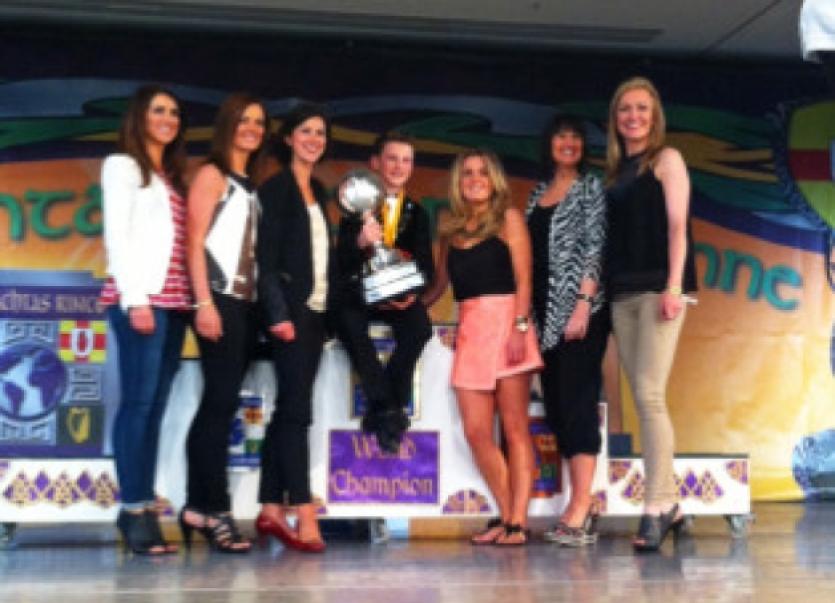 Earlier this week a young man from Ballydevitt in Donegal Town made history when he won the World Championship in Irish Dancing in London for the second time in his young career and tonight he will return victorious to his home town.

Earlier this week a young man from Ballydevitt in Donegal Town made history when he won the World Championship in Irish Dancing in London for the second time in his young career and tonight he will return victorious to his home town.

A homecoming celebration has been planned for 11.00 pm tonight on the Diamond in Donegal where Gerard will return with his very own “Sam”.

Gerard Byrne is indeed known to be very handy on his feet and has also made an impact on the football pitches around the county playing with both Donegal Town FC and Four Masters.

He is a familiar face to many in Donegal Town and indeed to everybody on the Irish Dancing Circuit and this week clinched the World Championship Irish Dancing 2014 title in the Hilton London Metropole.

Gerard is a member of the renowned McNeilis Cunningham Boyle School of Dance who are no strangers to the world of dance themselves having performed worldwide with the famous Riverdance troupe.

Speaking to the Donegal Democrat Claire McNeilis said, “We are just so proud of our Gerard Byrne world champ 2014. We left Boston last Easter after placing 2nd as a result of a trip he had on the stage and although we were devastated at the time we put in place a 12 -month plan and said this day next year Gerard will be the World Champ again.

“Hours and hours of practice and training have gone into this win, winning the Ulster, All Ireland and British titles along the way but throughout we only had one aim, bringing the world title back to Donegal Town and we have done it.

“Firstly, as teachers, we want to thank Gerard and his family, Gerry and Christine, for dedicating this year to winning this title and we would like to thank our own families who have shown great patience.

“As teachers we spend hours everyday training and teaching dancers, we couldn’t do it without the support of our own families.

“The celebrations continue in London and we are looking forward to celebrating in Donegal Town when we return home on Thursday night.”