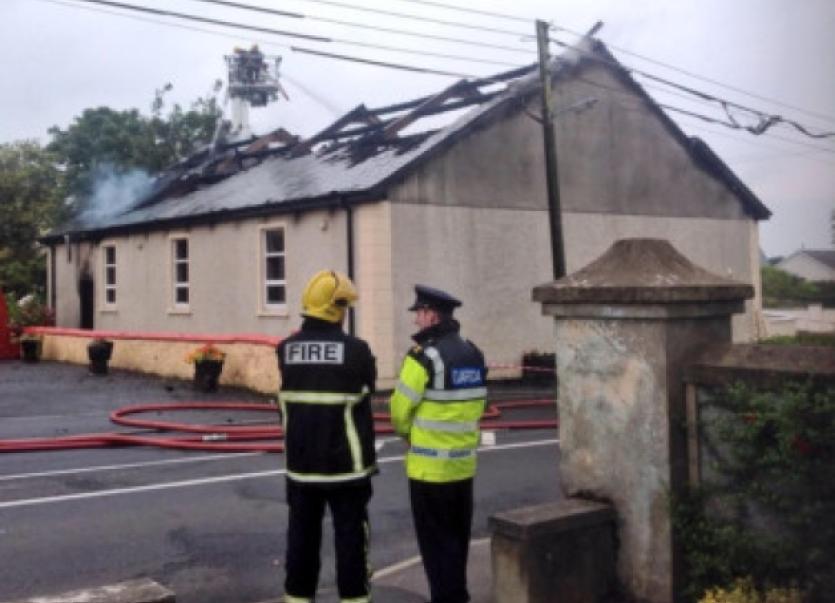 A fire which destroyed an Orange Hall in Newtowncunningham at the weekend was malicious, it has been confirmed.

A fire which destroyed an Orange Hall in Newtowncunningham at the weekend was malicious, it has been confirmed.

he blaze at Newtowncunningham Orange Hall was discovered at approximately 8am on Sunday morning.

The building was completely gutted as a result, and among the many items damaged was a World War One memorial in honour of local Orangemen who paid the supreme sacrifice.

Grand Master of the Grand Orange Lodge of Ireland, Edward Stevenson, attended the scene on Monday afternoon to survey the damage for himself, and offer his support to the brethren of Newtowncunningham True Blues LOL 1063.

Mr Stevenson said gardai have confirmed to lodge members that the fire was started deliberately.

He said: “This appears to have been a well organised arson attack, with the assailants starting the fire simultaneously in at least three different parts of the hall.

“This is nothing other than a heinous hate crime and a physical manifestation of the ongoing demonisation of our institution by some in society.

“We know the vast majority of people in the Republic do not condone such activity, but 20 years after the IRA ceasefire, there still appears to be a legacy of hatred against the Orange Order amongst a small minority, who are still prepared to attack us.

“Newtowncunningham hall was widely used by the local community and it is not only the Orange fraternity who will suffer as the result of the actions of a few mindless idiots.”

Mr Stevenson continued: “Lodge members are understandably devastated by the destruction of a vital component of their lives. Indeed, some have been left in tears such is their emotional attachment with the building.

“However, amid the anguish there is also a strong determination to have the hall rebuilt and returned to its former glory as soon as possible.”

The Grand Orange Lodge of Ireland has urged any witnesses, or anyone with information, to contact Gardai as a matter of urgency.

The hall, located on the village’s main street, was rebuilt three years ago. Previously, the building sustained a minor arson attack in 2010.

In 2007, Drumartin Orange Hall in Co. Cavan was destroyed in a similar attack.

There have been a number of other minor incidents involving Orange property in the border counties since then.

There are over 40 Orange halls in the Republic of Ireland.