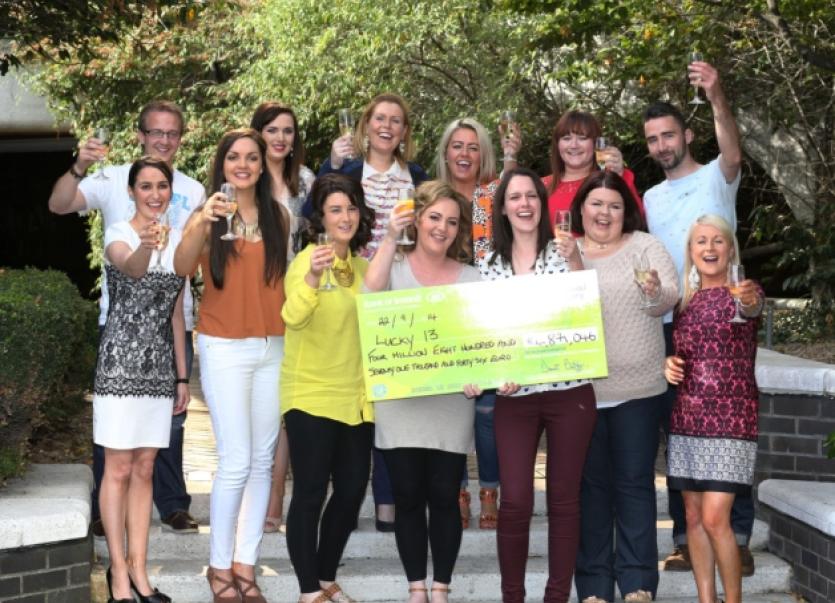 They may not have got their hands on the Sam Maguire at Croke Park on Sunday, but the celebrations were in full swing for a group of lucky Donegal work colleagues who picked up a cheque for a massive €4,871,046 at National Lottery offices on Monday afternoon.

They may not have got their hands on the Sam Maguire at Croke Park on Sunday, but the celebrations were in full swing for a group of lucky Donegal work colleagues who picked up a cheque for a massive €4,871,046 at National Lottery offices on Monday afternoon.

The Lucky 13 hit the jackpot last Wednesday when they bought their Lotto ticket in Cullen’s Cockhill Limited, Buncrana and matched the six numbers in that evening’s draw to scoop the massive jackpot prize.

The winners are aged from 20-40 years old and work in the insurance services team at Forward Emphasis, a customer services centre based in Malin Head. They’ve played Lotto together every week for the last year and the biggest prize they’ve won previous was €150.

One of the lucky group, Maria Doherty from Clonmany, only joined the company last week and this was the first Lotto draw she entered with the syndicate.

The colleagues will share the jackpot equally, each taking home €374,695.84. Plans for spending the winnings include paying off mortgages, purchasing new cars, holidays and shopping.

It is the fourth time a Lotto jackpot winning ticket has been sold in Buncrana. Since Lotto began in 1988, over €73.5 million has been paid out to 51 lucky winners in Donegal.

The last time the Lotto jackpot was won in Donegal, it was the biggest win for the county. In June 2014, the winning ticket of €12.1 million, which was purchased in American House, Main St. Bundoran, was won by a local couple.

To date the National Lottery has raised over €4.4 billion for good causes. This level of funding has made a significant difference to communities, projects and individuals in the areas of Youth, Sports, Recreation, Amenities, Health, Welfare, Arts, Culture, National Heritage and the Irish Language.