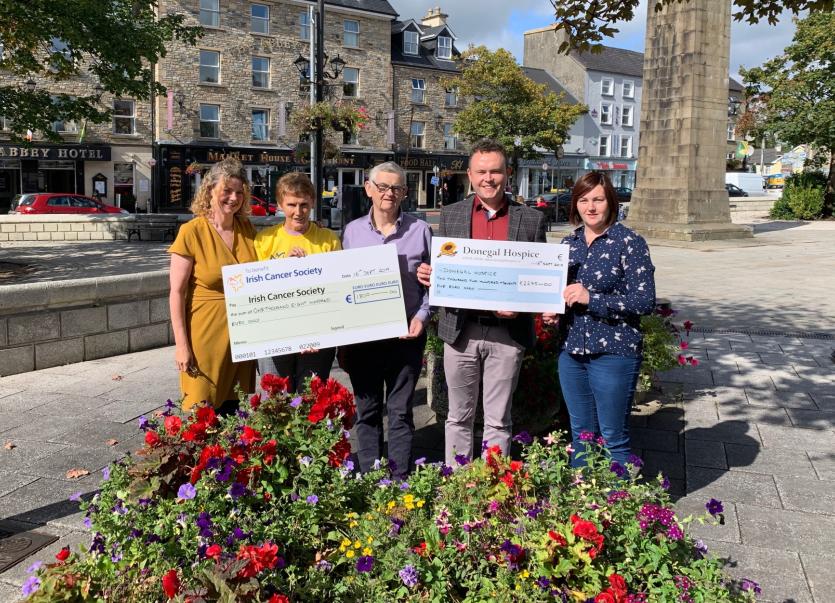 A Donegal family who have been struck by cancer twice this year expressed their gratitude to both the Irish Cancer Society and the Donegal Hospice at a cheque presentation this morning on the Diamond in Donegal town.

The well known John Byrne from Kilcar who organised fundraising for both organisations .raised a total of €4.500 after a successful table quiz in his pub, John Joe's in Kilcar

He said: "I just couldn't have managed by myself. My wife Maeve suffered from cancer for three years and then I was hit by it myself. We were both in the hospital at the same time.  I was in St. James's in Dublin while Maeve was in the Donegal Hospice in Letterkenny.home

"Eventually I went into recovery and was allowed home and Maeve's final wish was to be allowed home to see out her life. When she did get home, she lived for another two weeks, much longer than the doctors had predicted.

"This is my own simple way of saying thank you to everyone involved - the Cancer Society, the Donegal Hospices and the whole community around Kilcar around the south and west Donegal."

Pictured are; Mary Ferns and  Olive Gallagher from the Irish Cancer Society, John Joe Byrne and his daughter  Sandra and Liam Patton from Donegal Hospice