Over twenty thousand Christmas lights will be switched on by Santa Clause at Gortcally tonight, Friday 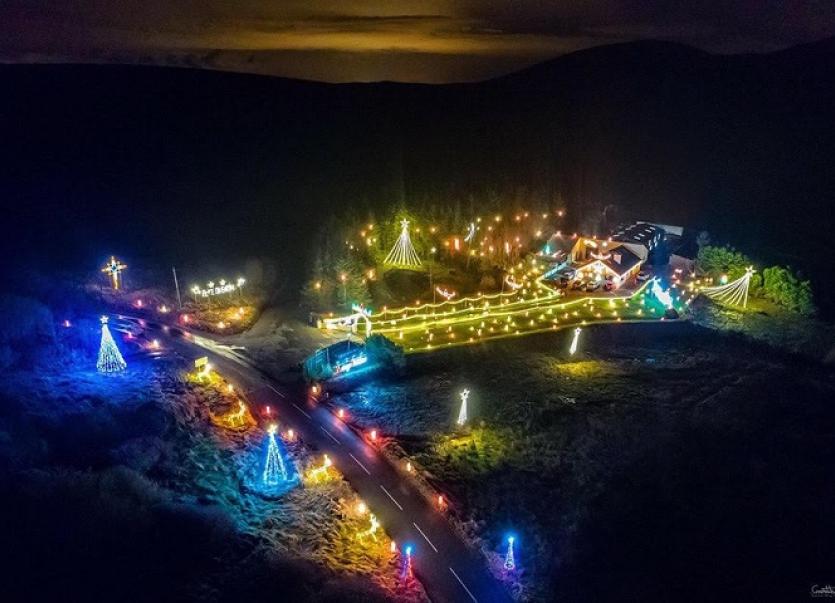 Twenty thousand Christmas lights are set to dazzle onlookers this Friday night when special guest Santa Clause switches them on outside Kerrykeel.

Mary Whoriskey and husband Michael have been lighting up the townland of Gortcally outside Kerrykeel for the past 16 years with their stunning festive display.

The couple have raised almost €60,000 for charities including Our Lady’s Children’s Hospital Crumlin and support organisations for people battling cancer, depression and Alzheimer’s.

The incredible light display – featuring 20,000 light bulbs and hundreds of different configurations – attracts visitors from all over Ireland and Britain. The display covers more than an acre.

“We’ve been told that it can be seen on a clear night by trans-Atlantic passenger planes overhead.

“It started as a bit of fun and it has just grown from there and we thought we’d use it to raise money for charities and over the years people have donated €57,000 to good causes.”

Mary said she gets more excited every year.

“It’s a magnificent display. We literally have people coming from all corners of Ireland and from further afield too,” she said.

“It’s brilliant for children, especially younger children. I get so much pleasure in seeing how much they enjoy it. And, of course the adults enjoy it too.”

Beneficiaries of this year’s donations are the Donegal Hospice and the local Mevagh Voluntary Fire Service.

Friday’s events start at 7pm with carol singing with Santa due to land at 7.30pm. The lights will remain on until January 6.

The lights display includes a life-size crib, reindeer, snowmen, Santa’s magical grotto where Santa will meet children on Friday night, and where people attending will be treated to hot chocolate, mince-pies, and children will receive a Santa goodie bag.