A salesman, a community man, a wonderful family man is laid to rest 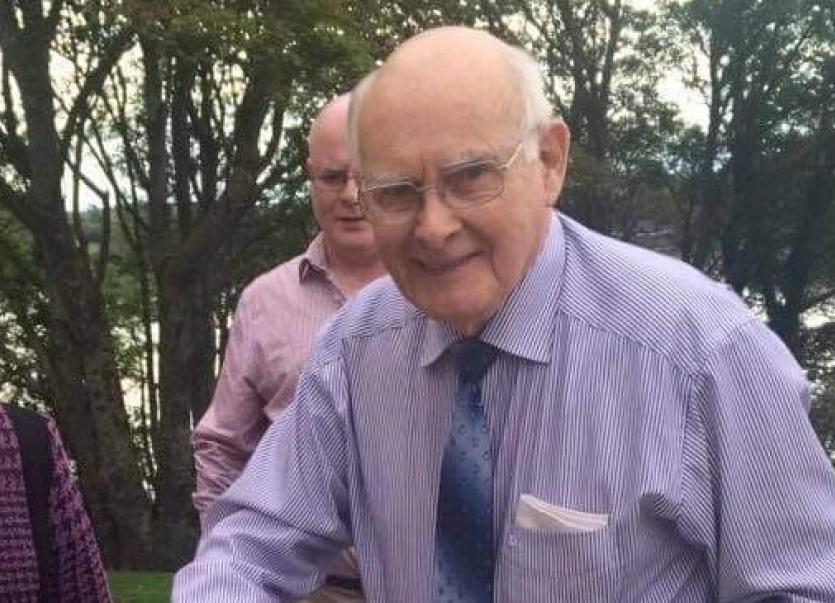 The recent passing of Patrick (Patsy) Cassidy of Cassidy Electrical, Ballyshannon and Donegal town severs a link with the early days of television rentals and sales in south and west Donegal, north Leitrim and Sligo.
For many people from the Drowse to the Gweebarra there’s every chance that their first television was one they rented from Patsy.
A wonderful husband to Angela, a fabulous father, grand and great grandfather, Patsy was a natural storyteller, a man who always seemed to be in good humour and someone you just wanted to be in your company. To be frank, he was a legend, and like so many who reach that status, he neither knew nor cared that he was thought of in that way, he just loved life, living and people.
While the ‘Cassidy Electrical’ name is now well-known across the north west, Patsy never had it handy, he made his way in the world through hard work, using his head and an ability to recognise an opportunity and close a sale.
In a wonderful homily where he caught the essence of the man perfectly and at times had mourners smiling, laughing and nodding in agreement, Fr Cathal Ó Fearraí, PP Kilbarron, said Patsy had learned much from “the school of life”, had “the gift of the gab” and could, and probably did sell “ice to the eskimos In his day.”
His sales pitch when the colour television business was in its infancy was legendary. Fr Ó Fearraí, PP, brought a long ripple of laughter from mourners when he reminded them how Patsy would “leave a colour television into a house and suggest to the owner to ‘see how you get on with it for a week’. Inevitably when he would call back, there was no chance the family would want the television to be taken away, and they became another satisfied rental customer.”

LAST MAN STANDING
Aged 84, he was the last surviving member of his own family, “the last man standing” as Fr Ó Fearraí put it. He said every generation makes their contribution and in so many ways Patsy did so in his family life, in his community and in business.
Welcoming mourners to a packed St Patrick’s Church, Fr Ó Fearraí acknowledged those who had travelled long distances to attend the funeral, from Leeds, North Hampton, London, Abu Dhabi, Luxembourg and all parts of Ireland. He mentioned Patsy’s grandson Ronan in New York who joined the service via webcam and he welcomed his fellow priests, Fr Dermot Burke (PE) and Fr Anto.
Fr Ó Fearraí said Patsy was “a people’s person, warm-hearted, welcoming, great to meet, had a wonderful sense of humour, good sense of fun, had the gift of the gab.”
He recalled a man who loved vintage cars, shooting, watching darts on TV, supporting Donegal GAA, walking and various television programmes, a favourite, Judge Judy, again prompting many smiles when mentioned. He said Patsy had met head on some health issues during his life with typical courage and he reminded mourners of his deep faith.
He spoke fondly too of Patsy’s contribution to his community, how he was always willing to help and was one of a group of people who assisted with church collections/counting.

BORN IN INVER
Born in Tievedooley, Inver, he went to his brother’s wedding in Birmingham at the age of 14 and he stayed on in the UK, working in London and Birmingham.
In Birmingham he met the love of his life, Angela Maguire from near Mohill in Leitrim and aged 21 he married her, with the couple enjoying 63 years of happy marriage.
They returned from Sparkhill, Birmingham to Croagh, Dunkineely to a small farm and shop. Work was scarce and Patsy had to take every opportunity to make a living, and he did that, working also in the boathouse in Killybegs.
In 1972 the family moved to Ballintra where they opened an electrical and furniture shop, continuing there for ten years while they opened a shop in Donegal town in 1977 and in 1982 they moved to Ballyshannon, their home and the fine adjoining premises at the top of the Main Street, well known to so many.
During Requiem Mass the wider Cassidy family were all involved in the liturgy in many ways, readings were by Julie and Patrick, prayers of the faithful were read by Lorena, Shannon, Kellie and Niamh. Gifts to the altar were brought by Eoin and Ciara.
Following Holy Communion his grand-daughter Joanne gave a stunning rendition of Go Silently which prompted a spontaneous round of applause
Patsy is survived by his loving wife Angela, sons Noel (Ann) Letterkenny, Gearld (Inger) Mountcharles, Martin (Joan) Ballintra, Thomas (Helen) Rathmore, Edmund (Marina) Letterkenny, Sean (Vera) Ballyshannon, Ciaran (Jane) Ballyshannon and daughter Evelyn (Anthony) Rossmore, his 20 grandchildren, four great-grandchildren, nieces and nephews, brother-in-law Tom Maguire and wider family circle.
May he rest in peace.