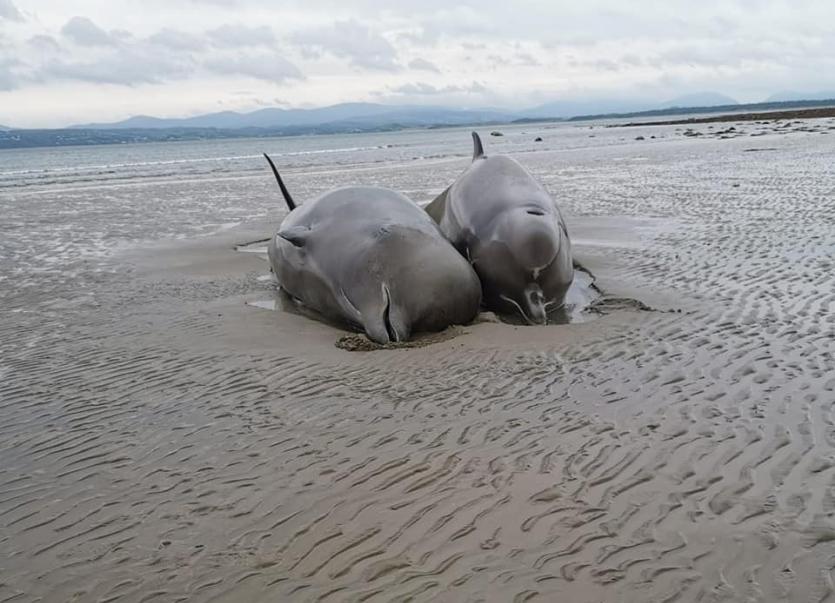 Photograph by Thomas and Louise Coleman

All eight whales that became stranded on Rossnowlagh beach have died, according to the Irish Whale and Dolphin Group (IWDG).

As yet, it has not been ascertained why the beaked mammals swam to our coast as they are normally found in deep water.

One solitary bottlenose whale survived from Wednesday to Thursday morning. However, the group did not hold high hopes for its survival as it was alone and usually lives in deeper water.

One whale seen here lifting its head to breathe has refloated itself and swam out with the incoming tide. We are cautiously optimistic it will make it out but IWDG will standby and check to see if it restrands. Video by Nicola Coyle/IWDG pic.twitter.com/8NRzsBPBQu

Volunteers of the Irish Whale and Dolphin Group are taking samples from the whales, before the carcasses are removed by Donegal County Council for incineration.

Earlier today, crowds of people, many who came to get a selfie taken with the whale were asked to keep their distance from the whale.

We are receiving upsetting news from our first responders on site in Donegal that crowds are forming to take selfies with the only alive northern bottlenose whale. We ask people to keep a safe distance from the whale, and, urge people to respect the whale and our IWDG members.