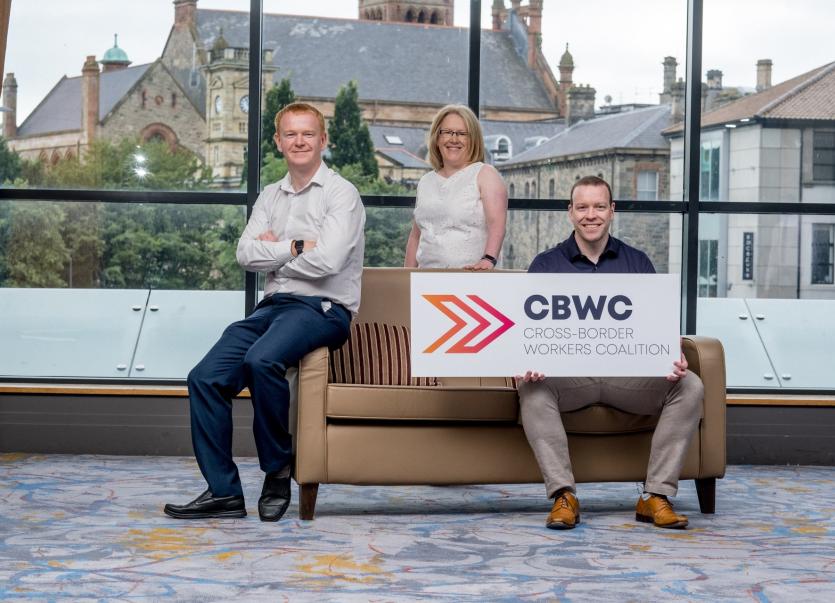 A new campaign group has been established in the North West to place pressure on the Irish Government to make changes to personal tax liability regulations for employees resident in the Republic of Ireland but who work in Northern Ireland.

The group, the Cross-Border Workers Coalition (CBWC), has been set up in response to the fact that employees who live in the Republic of Ireland but work in Northern Ireland are largely prohibited from remote working and are subject to a ‘double tax’ on their income should it be determined that they have worked from home or within the Republic of Ireland.

The CBWC has now called on politicians to urgently review the situation and take advantage of the opportunity that has arisen during the coronavirus crisis when all companies across the island of Ireland instructed their staff to work from home as the pandemic took hold.

The new body says the financial contribution of this tax to the Irish Revenue is minimal and a blunt measure impacting on the health and wellbeing of workers, particularly at this difficult time.

Whereby a NI resident employee can work in the Republic of Ireland for a number of days without triggering a tax liability, a RoI resident employee that works substantially outside of RoI would lose the ability to claim Cross Border Worker Relief for carrying out certain duties.

Now that the lockdown enforcement is beginning to ease it is thought that many cross border workers will remain working at home for some time to come. The group says it’s time the make the right changes to future proof against other outbreaks and create a better work life balance for employees who are forced, in some cases, to commute up to 500kms each week, mostly by car.

Spokesman for the group and Donegal resident working for a NI based company Conor Dowds said:

“Despite Cross Border Worker Relief being in place to allow the tax liability of Republic of Ireland residents to be waived, this only relates to a very small number of permissible actions and is largely ineffectual.”

“Under the current rules, RoI domiciled employees working for an NI based company are subject to a ‘double tax’ on their income if they are to perform any work-related activities in the Republic of Ireland.”

“This has caused great stress and worry for many members of our group when companies took the decision at the start of March to have all their staff work from home. Thankfully the Irish Revenue waived the liability in relation to the situation during the surge phase of the coronavirus pandemic, but it really did bring into sharp focus the restriction this forces on people who live in RoI but who happen to work in Northern Ireland.”

“We hear on the news daily that we are to expect a second coronavirus wave, a potential winter ‘flu outbreak, not to mention the systems that will have to put in place when the UK leaves the European Union, so we need to have some certainty that our members will not face the threat of the tax liability as we face the new normal. The need for change could not be any more apparent.”

Aidan O’Kane part of the leadership of the Cross-Border Workers Coalition continued:

“The stress and strain the current regime places upon the health and well-being of hundreds if not thousands of workers is having a real and lasting impact on people. Technology is so advanced that workplace connectivity is now commonplace and has proven to allow workers to spend more time with their families when they are not commuting. It has cut down substantially on pollution and traffic due to the over reliance on cars getting workers across the border to their physical office space.”

“With Brexit looming we need to ensure that we do all we can to mitigate the worst impacts of the UK leaving the European Union. That means reminding our politicians about the guarantees contained in the Good Friday Agreement and the flow of people, talent and skills across the island of Ireland which has a significant impact on our collective prosperity brought about by wealth creation, jobs, economic growth and social mobility.”

Paul Quinn part of the leadership of the Cross-Border Workers Coalition added:

“It is time that changes were made and we are calling on our local elected representatives in the North West on both sides of the border and those with the Ministerial responsibility in Dublin to take this opportunity to adapt the rules to alleviate this pressure on many anxious employees.”

“We are pressing our politicians to be live to the benefits of allowing RoI employees who work in Northern Ireland to give them the flexibility to work from home, even for a limited number of days that is equivalent to those afforded to NI employees.”