Buried soldier had strong connections to Bunaninver and its people 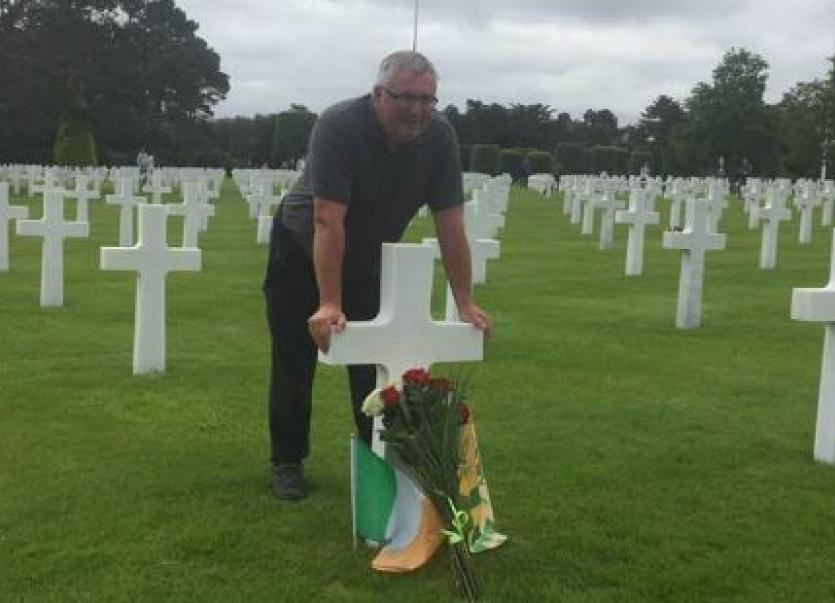 A Brinalack man who is currently working in Paris recently traveled to Normandy to visit the grave of a young man whose parents were from Gaoth Dobhair.
Cnoc Fola native Hudie Ferry and his colleagues visited the grave of Harold J Brogan who was killed by a German bullet in Normandy on July 5, 1944.
The Irish men are in Paris working for the Donegal-based company, Source Continental.

Relations in Scotland and Bunaninver

The visit was especially poignant for Hudie who knows living relations, in both Scotland and in Gaoth Dobhair, of the late Harold J Brogan.
Harold's parents were from the Gaoth Dobhair area. His father Patrick Brogan was born in Bunaninver in 1882. He was one of 13 children.
Patrick went to Scotland, like many from the area at the time, and was married in Falkirk. It is thought he most likely worked in the mines.
Harold’s mother Máire Hegarty was from the Brinaleck, Bloody Foreland area. The couple moved to both New York and onto Montana during their lifetime.
Patrick signed up in WW1 to the Canadian army after which he gained Canadian citizenship. Patrick was recognised for his outstanding commitment on the battlefield.
His son Harold also joined the army. He was refused leave when he asked to go to visit his father’s birth place, Bunaninver. He was visiting Belfast at the time of this request and this was a short while before he would go to fight against the Germans on the battlefields of France.

The text that prompted a return

The visit to Harold’s grave in Colleville-sur-Mer took place on Hudie’s second visit to the Normany graveyard. On leaving after their first visit Hudie received a text from Bernie McGeady to say that Harold, a relation of her own, was buried in the French graveyard among around 9,000 other soldiers.
The men decided, at a later date, to return and visit his grave. Hudie was delighted to have a Donegal and Irish flag with him on his sescond visit. These were furnished to him by Anne Gallagher of Bunaninver.
The men placed the flags alongside a bunch of flowers on Harold’s grave.
Hudie said there was a feeling of great sadness in the cemetery which is surrounded by picturesque countryside with rich greenery.
Birds sing in the branches of the trees above the terrain which was once a battlefield where bullets were fired and many young men lost their lives.
The men stood surrounded by white crosses which mark the graves of those who had lost their lives in the heat of battle.

He handed a purse to his friend

Hudie and his friends found the grave they were looking for with little trouble despite the large number of graves. Guides help people make their way to the grave of the person they are looking for.
Since his journey began, Hudie and his friends have learnt a lot about Harold, his life and his relations. Hudie said that Harold was known as ‘Irish’ on the battlefield.
“He was only 25 years of age when he was shot,” Hudie said adding that the young Mr Brogan died one day after having been hit by a single German bullet.
Hudie said that Harold’s grandson, Corey Brogan Kearsley, came to Ireland around three years ago to visit the home of his ancestors. He met Bernie McGeady in Dublin and subsequently visited Bunaninver which is located near the sea.
Hudie said he recently heard that before his death Harold had handed a soldier his purse and asked that it be given to his family.
A picture of his dear mother was inside the purse.
The purse was received two years ago by his grandson, Corey Brogan Kearsley.
“He is going to tell me in the future of how he eventually came to be in possession of the purse. It is a very interesting story,” Hudie said.