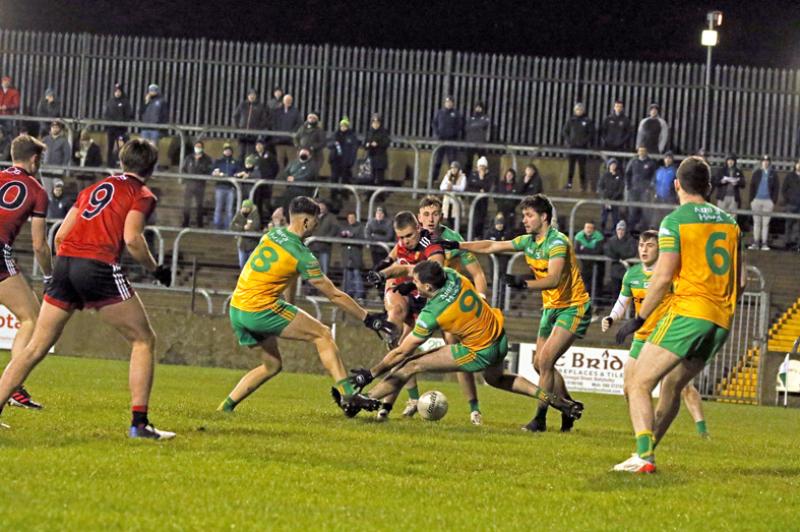 All hands to the pump for players of Donegal and Down in the Dr McKenna Cup. Photo Thomas Gallagher

Down were unfortunate as referee Sean Hurson, who had a decent match, seemed to momentarily point the wrong way and Donegal played their advantage tellingly with two to play and the score level at 1-11 to 2-8.

Peadar Mogan almost stopped and looked over his shoulder before continuing on to score. Patrick McBrearty then scored his fifth of the night to seal a two-point win.

A belting goal from the unlikely source of Tony McClenaghan, who won man of the match, some 19 minutes from time had put Donegal into a 1-10 to 1-6 lead with the opening goal of the contest coming late in the half from Down’s Andrew Gilmore. 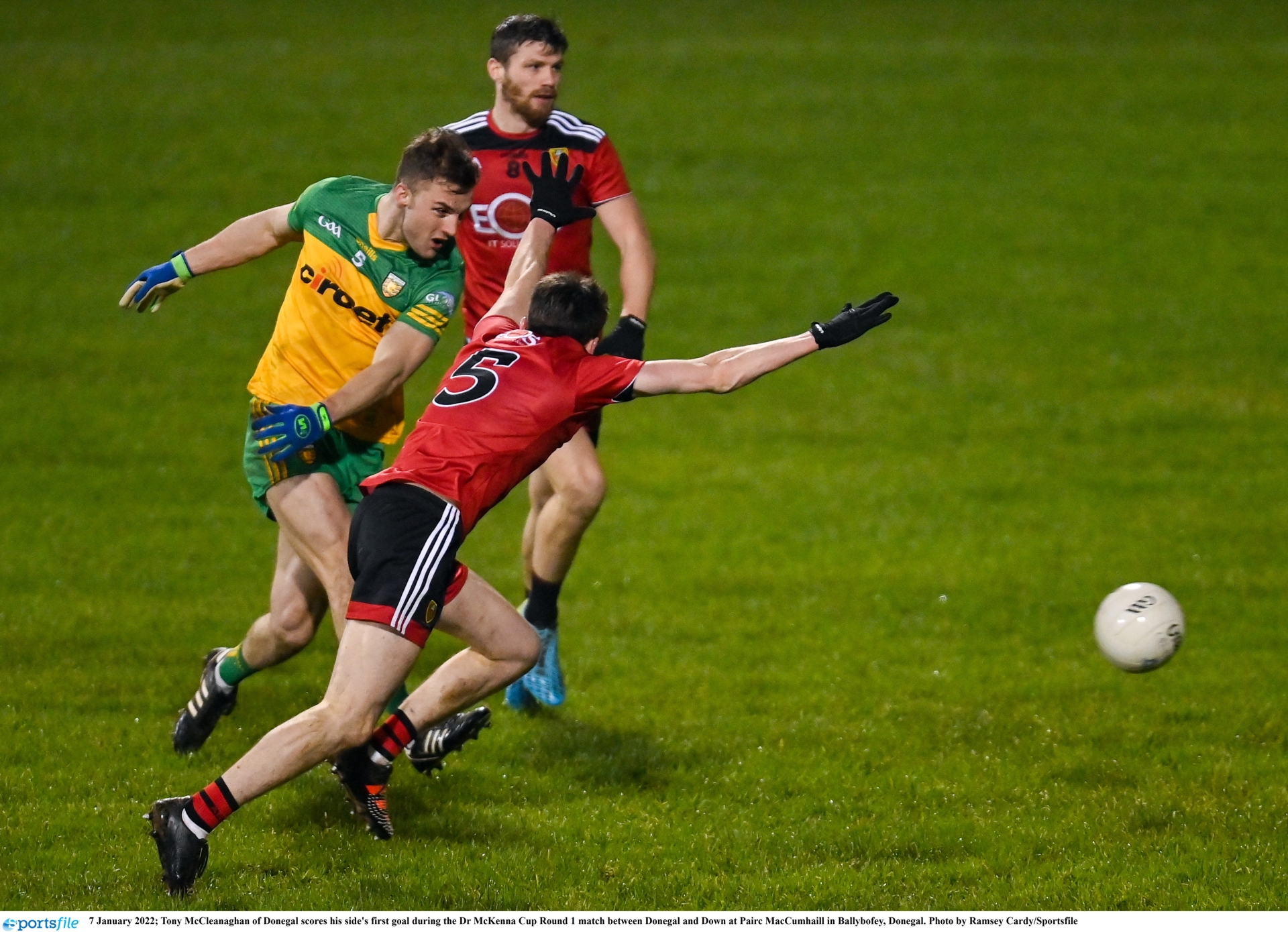 However, McCartan’s team dug in and with Ruairí McCormack on the mark twice were still within touching distance. Then, with just five minutes to play, Michael Langan of Donegal gave a sloppy pass in front of his goal and Odhran Murdock put the visitors one up, 2-8 to 1-10.

Donegal kept their nerve, though, and kicked the final three points of the night, with Ciaran Thompson's score the prelude to Mogan and McBrearty’s points.

The scene was in stark contrast on a crisp January night. Barry O’Hagan - who kicked eight points against Donegal at Pairc Esler last summer as Donegal romped to a record 2-25 to 1-12 championship win - opened things with a fifth minute free prior to a levelling score from Carndonagh’s Conor O’Donnell from long range.

It was open enough fare, with Rory Burns, the Down goalkeeper, taking a roam upfield himself on 15 minutes only for his effort at the posts to fall into the arms of Michael Lynch, his opposite number.

O’Hagan would score two more first quarter frees but his Down side still trailed 0-4 to 0-3 with McBrearty, Shane O’Donnell and with the last kick before the water-break - a  Langan free - giving the hosts a 0-4 to 0-3 lead.

The closest either side came to a goal in the first half was when Charlie McGuinness - Donegal’s other debutant alongside Shane O’Donnell - had a pop at goal with Burns in no man’s land.

Burns had been having a little other off the tee and played a ball to his left to Denis Murtagh, who was dispossessed under the stand. The Down netminder, frantically backtracking, denied McGuinness with a decent save four minutes before half-time. 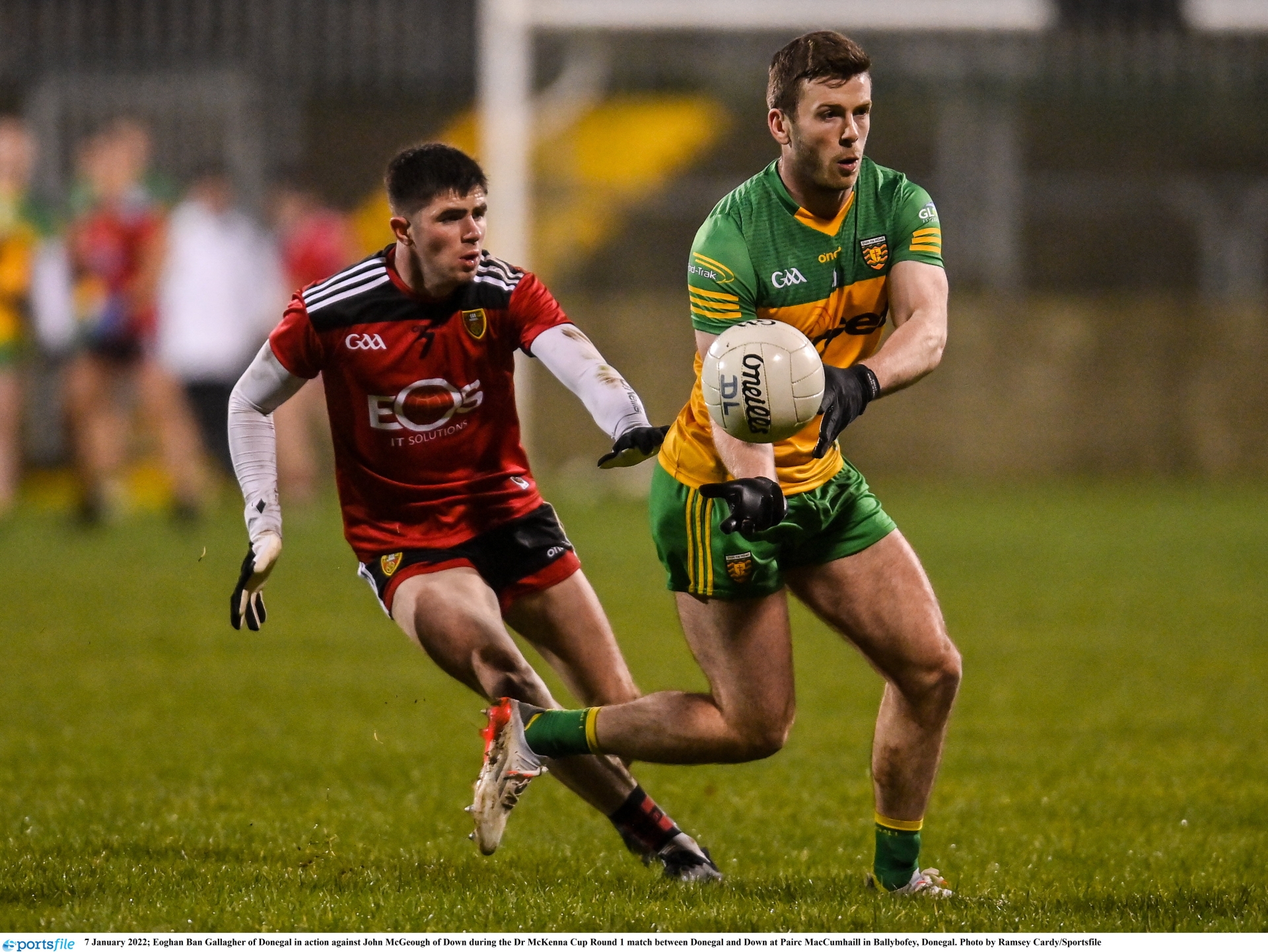 By that stage the score was 0-7 to 0-3, with a decent second quarter consisting of two more McBrearty scores and one from Langan at midfield. However, it was the visitors who finished the half well when Gilmore slapped past Lynch from close range for a Down goal after Cormac O’Rawe had skipped around the side at the byline to set up the chance.

Then, in first half injury time, Pat Havern tied things up at 1-4 for Down to Donegal’s 0-7.

McBrearty, though, with his fourth point of the half and his side’s first in 15 minutes popped over a free and with the last kick of the half an excellent Peadar Mogan point meant Donegal led 0-9 to 1-4 at the break.

Langan extended the Donegal lead, although with Down showing a willingness to go long more frequently than before and Havern inside was a target, the away team were never too far away. McClenaghan looked to have swung it one way, then Murdock the other but in the end Donegal came through.