Donegal to dust themselves down for the qualifiers

Chairman Dunnion praises the effort of Donegal players on a day of deep disappointment in St. Tiernach's Park 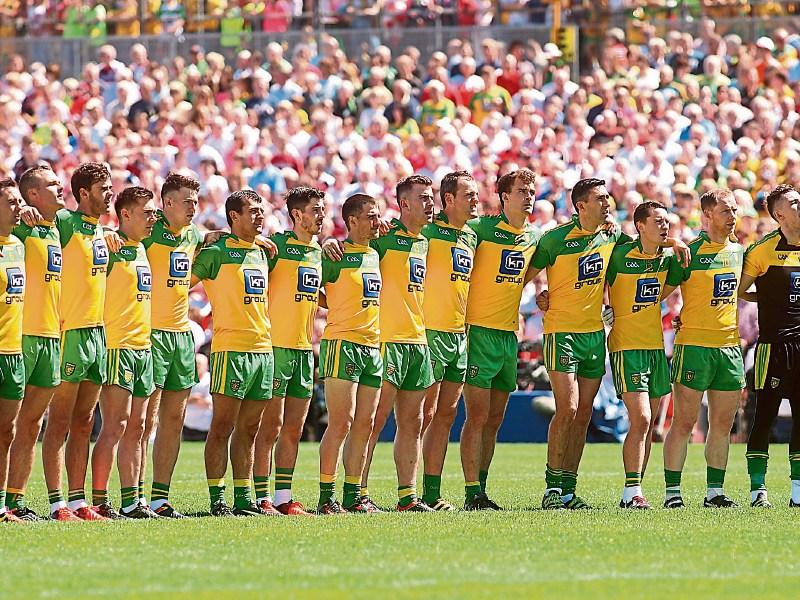 There is no other way to describe how a rampant young Red Hands team made Tír Conaill sup sorrow from a rusty spoon on Ulster’s greatest field of dreams.

It looked like it might be Donegal’s day when team captain Michael Murphy boomed over a massive 53 metre free with normal time up.

But there were still six minutes left, six bitter moments when Tyrone stamped on our dreams of four titles in six years.

And that released a dam-burst of unadulterated Red Hand joy, for their day had finally come against a great group of Donegal players who had sent them home from Clones with the sour taste of defeat in 2011 and 2012.

And Sean Cavanagh and Peter Harte drove home those final red and white stakes that put darkness on a bright summer day.

In fairness they had waited for this day for six years, but we will still be wondering what would have happened if Frank McGlynn had been awarded a free when he seemed to be impeded with Tír Conaill a point in front.

It didn’t happen and Tyrone punished Donegal within 15 seconds.

But what is hardest of all to take is the fact that Donegal led Tyrone for over 60 minutes of this absorbing shootout, only to lose at the most bitter end.

Down in the bowels of the stadium a deeply disappointed county chairman Sean Dunnion reflected some of the mood of the county.

“It was very disappointing as we came here today with a lot of expectation,” he said.

“We were level coming into injury time and were ahead when Michael Murphy put over that great long range free. But we always knew that Tyrone were going to keep coming back at us.

“You can give nothing but credit to our lads out there today who put in a tremendous effort and it is just difficult to take at the minute”, he admitted.

“We played exceptionally well for so long and it was a tough day out there with all the heat.

“We took the game to Tyrone and a lot of people did not give us much of a chance. We were not the choice of the pundits or the bookies.

“But I knew our lads were prepared for it.

“But great credit to Tyrone as they really stayed strong to the end”.

At one stage Donegal led by 0-8 to 0-4 just after halftime but they never looked liked pulling away.

“They were just so very strong and for the last 25 minutes they set up a really strong blanket defence and we just found it so very difficult to get through it.

“They had a white wall on the '45 and we just could not seem to penetrate it.

“But we still managed to keep ahead of them and Michael Murphy might have landed that last free on another day.

“But good luck to Tyrone”.

“They tore down the field and really kicked some wonderful scores,” he said.

“Tyrone are a terrific team and they came back really strongly, but our boys were really up for it.

“We have had a tough Ulster Championship so far with matches against Fermanagh and two against Monaghan.

“But we had fabulous support out there today and it would have been a great Ulster championship to lift”.

And when asked if there was a “turning point” in the match, Dunnion referenced the “tackle” on Frank McGlynn when Donegal were a point up.

“If we had got a score there it would have put us two up, but I would like to have seen it again,” he said.

“And Tyrone came back down the field and it was level.

“But, in fairness to the referee, he had a very good game.

“Frees were hard won but I would like to see that one again.”

And now Donegal must re-focus for the Qualifiers.

“We have two weeks now to prepare for the Qualifiers, but I am sure the lads will dust themselves down and get ready.”