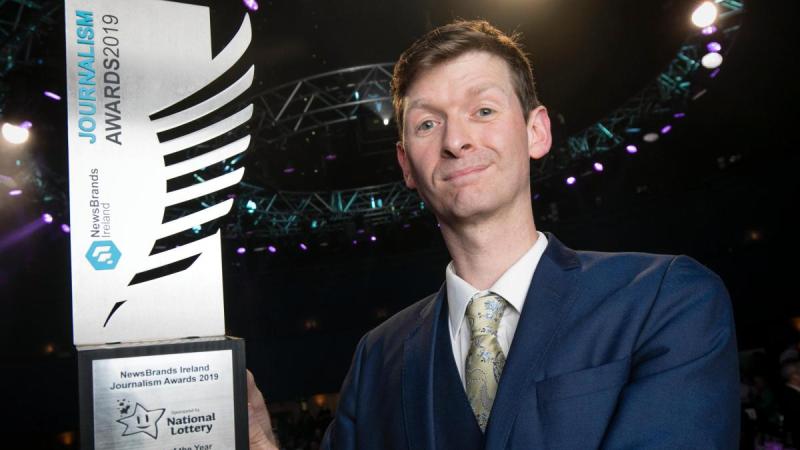 A Donegal Town man and Sunday Times journalist Mark Tighe was the recipient of multi-awards at the Newsbrands Awards in Mansion House on Thursday afternoon last week.

The 2018 National Journalist of the Year is a son of Mary Tighe,neé Muldoon and Liam Tighe from  Donegal Town.

Mark is and former pupil of the Royal & Prior School, Raphoe and was first to expose the FAI controversy.

Mark has been a frequent visitor to Donegal especially for both pre-election and count coverage where predictions are regarded as very astute by his colleagues.

Tighe was also awarded the Scoop of the Year and News Reporter of the Year awards, as well as being part of the team to win the Investigative Journalism and Campaigning Journalism awards for their exposure of issues around corporate governance in the Football Association of Ireland.

The award was presented by Vincent Crowley, Chairperson of NewsBrands Ireland, Tim Vaughan, the Chairman of the Journalism Awards Judging Panel, and Andrew Algeo, CEO of the National Lottery who sponsor the Awards.

The Journalist of the Year award, said Mr Vaughan, went to a journalist whose tenacious work “has led to a raft of stunning revelations that raised huge question marks about governance and transparency at one of the country’s most high profile organizations.”

NewsBrands Ireland Chairman, Vincent Crowley, said: “People consume more hard news than ever before with our print and digital content read by 74 % of the population. matter when people are looking for news coverage. When it comes to news, trust is everything.”

Another Donegal based journalist Paddy Clancy was awarded the Lifetime Award when during a celebrated career, he has covered many major stories at home and abroad covering some of the most war-ravaged conflict zones in Africa.