Brian Drummond gets surprise with portrait by Barry Britton 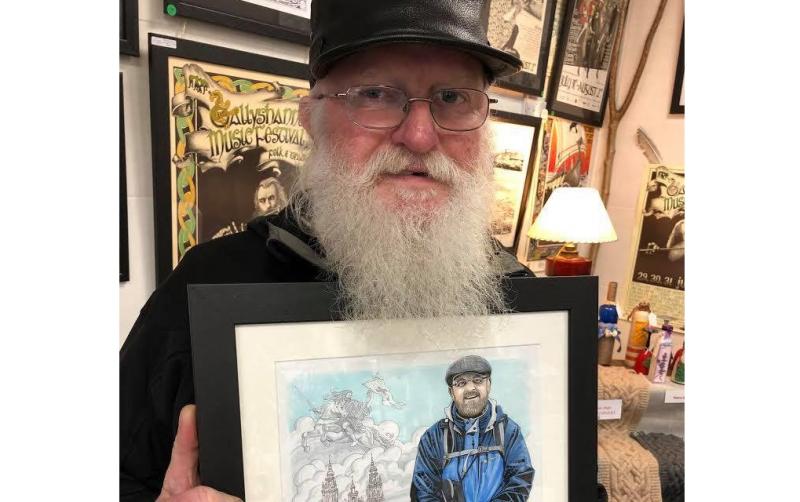 Anyone who has attended any event in Ballyshannon will most likely have encountered Brian Drummond and his camera.
Brian has been an ever-presence at all events and especially sporting events in the town and he has already left a legacy that will be there for future generations.
But this week the tables have been turned on the genial Brian. To mark his birthday (not his 60th he is keen to explain) a special portrait was commissioned by his family Imelda, Ronan and Daire and the result is outstanding.
But then we should not be surprised as it was carried out by well-known artist Barry Britton, a member of the Local Hands creative group in Ballyshannon.
In a Facebook post, Barry Britton explained the finished portrait:
The Snapper has finally been snapped himself! Brian Drummond has spent a lifetime taking photos of everything from major local events to the beauty of the ordinary thing. But if you pointed a camera at him he'd usually shy away.
I did this portrait of him from a quickly taken snap as he stood proudly in front of Santiago de Compostela cathedral in Galicia. He had just walked the 783 kilometers Camino across northern Spain from the French border. No doubt he was looking forward to accepting his Plenary Indulgence as reward for his pilgrimage, but also thinking about a big cold glass of San Miguel waiting for him in the nearest taberna.
The figure up in the clouds is St. James the Apostle, known throughout Spain as Santiago Matamoros. This translates as 'James Killer of Moors'. As I was drawing the figure in the clouds I did wonder what would happen to the hundreds of Matamoros statues churches throughout Spain in these 'Black Lives Matter' times. Mostly they depict St. James slaughtering Moors as they cower beneath his horses hooves.
Something tells me that the Spanish will not be in a hurry to address this issue! Brian's family commissioned this artpiece for his 57th birthday. Happy birthday, Brian! - Barry Britton