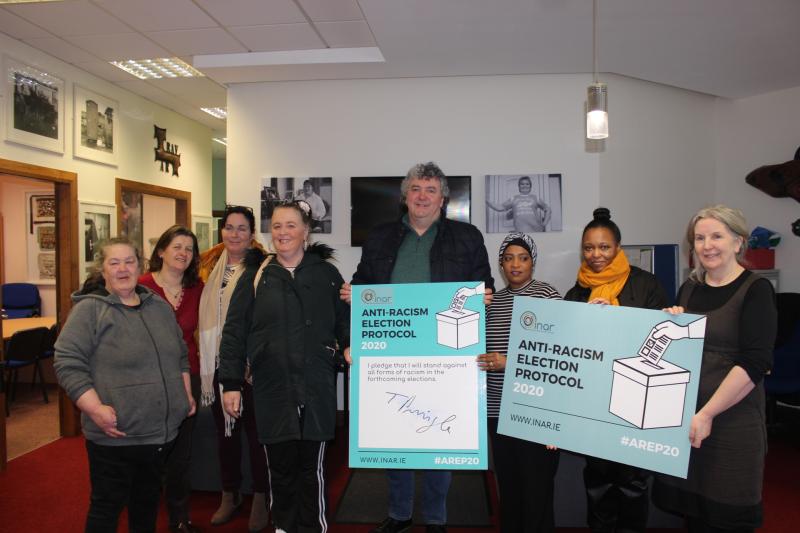 Outgoing TD Thomas Pringle after signing the Irish Network Against Racism Anti-Racism Election Protocol at the offices of Donegal Travellers Project in Letterkenny.

Deputy Pringle said: “I am proud to stand with, with Donegal Travellers Project, with Donegal Intercultural Platform and the Irish Network Against Racism (INAR) in combating racism, all forms of discrimination and hate speech.

"Racism, discrimination and hate speech have no place in our society,” he said. “If racism affects one member of our society, it affects us all.

“We must show active solidarity with all members of our communities, our county, and our country, and work to build intercultural communities,” he said.

The protocol calls on candidates to send a consistent and clear message to constituents that they reject racism and all forms of discrimination and hate speech, and to take further actions to ensure that the elections are conducted in such a way that they do not incite hatred or prejudice on the grounds of “race”, colour, nationality or ethic or national origin, religious belief, and membership of the Traveller community.

The Killybegs-based TD said: “In my manifesto, ‘For Donegal, For the People,’ I propose a number of important steps to tackle racism, discrimination and hate speech.

"Ireland must implement the UN Convention on the Elimination of all Forms of Racial Discrimination and adopt a new National Action Plan Against Racism. The last action plan ran from 2005 to 2008. There is no excuse for not adopting a new plan.

“I will support strengthening of hate crime legislation, in particular in relation to hate speech online and have sought to do this in the past.

“We also need the Traveller Health Action plan to be completed and implemented immediately.

“We must also revive the National Consultative Committee on Racism and Interculturalism and provide an inclusion plan for newcomers to Irish society, allocating sufficient resources for the provision of language support teachers in the education system.

“Our country has always been diverse and each member in today’s societyhasa responsibility for building a just, equal and inclusive society. It is important for us to recognise that responsibility, for the good of our society and our country.”

He commended the work of Donegal Travellers Project and the Donegal Intercultural Platform, saying that: “It is community-based and led organisations like these who show the way to highlighting and combatting racism and discrimination.

"These are inclusive organisations that have built bridges between communities and broken down barriers to participation by minority and marginalised groups.”