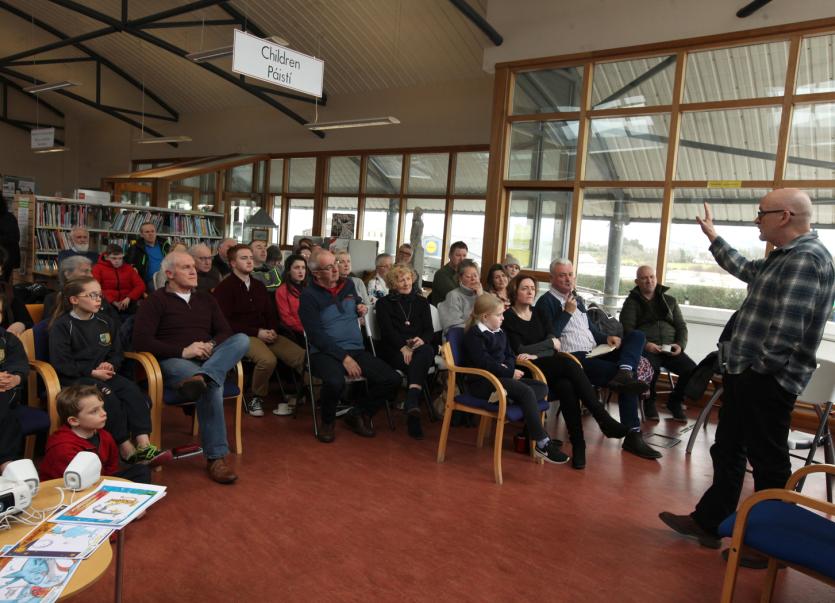 I hadn’t met Roddy Doyle for a few years until he came to Bundoran Community Library and we reminisced about a mutual friend, the late Dermot Healy, a great Cavan writer who lived in Sligo.
I was a groomsman at Dermot’s memorable wedding and Roddy recalled the equally memorable party afterwards in Ellen’s pub in Maugherow. “The Guards raided and the only one caught was poor Bob Quinn, the filmmaker!” Like his friend Dermot, Roddy is funny and very direct and that combination was evident as he informed and entertained the gathering in Bundoran.

He was there on the occasion of the first anniversary of Fighting Words North West to give a background to this very exciting and innovative project and to encourage more volunteers to participate. Interestingly, during the course of Roddy’s own life he has made south Donegal connections during significant periods of his life. He taught in Greendale Community School in Kilbarrack from 1979 to 1993, where a friend and colleague was Ballyshannon man, Dermot Carney, who was a boarding classmate of my own in St. Eunan’s College. Although he wrote some four novels, and was involved in a film and TV series during those, years he never got to use that experience in the classroom. “That’s why I resigned, “he told the audience, “it was obscene”. Only dead writers were revered and I was reminded of a dear friend who attended the very first William Allingham Festival in 1979, John F Deane, poet and founder of Poetry Ireland. John often told the story of the early days when a writer was sent to a school in Dublin only to be somewhat flummoxed by a young lad who kept staring at him throughout the class. Eventually, he asked if everything was okay. “Jaysus mister!” said the boy, “I thought all poets were dead.”
The other significant Ballyshannon connection is actor Sean McGinley who played Charlo Spencer in Roddy’s groundbreaking “Family” in 1994. As Roddy recalled some years ago, the experience was a controversial one. "It caused a storm. The first episode was broadcast in Ireland in May 1994, a few days after the Eurovision Song Contest. What was significant about this particular Eurovision was that it unleashed Riverdance, this Vegas version of our culture. I'm not kidding: it was a major moment for Ireland. The country was sexy for the first time since St Patrick came over and brought his Christianity with him. And Family was on four days later. People said, 'Ah, just when we were feeling good about ourselves . . .'" As The Guardian reported: “The repercussions were beyond anything he could have imagined. Doyle went overnight from Ireland's darling to national pariah. ‘The celebrity status that attached to me when I won the Booker, invitations to open supermarkets and all that shite – it stopped the day Family was broadcast. There were accusations that I was suggesting this was normal working-class life, that I was undermining marriage. I was the subject of sermons, editorials, political programmes on TV. I got death threats. It was a very unsettling time, especially with two small children." (Doyle married his wife Belinda in 1989; the couple have two sons and a daughter.) "I knew what I was writing, and I was proud of it, but I didn't know it would have such consequences."
Not that he is easily derailed. In Bundoran he revels in telling a great yarn about a student in a Christian Brothers School in Dublin, dyed hair tied in a manbun and playing a tune on the piano written by a Chinese composer. He laughs: “I would love to see the reaction of my old Brother Principal back in 1975...he would probably have been tempted to clock him!” Fighting Words work with primary and secondary schools, and although Roddy had a wonderful morning with Holy Family NS, he is a champion of the secondary kids. He believes that they are misunderstood and been written off to a great extent. They are accused of living on their smartphones, yet, as Roddy pointed out, usually on public transport, we encounter middle aged people on their phones probably texting “About terrible teenagers never being off theirs!”
He once asked a student why he was spending so much time on his smartphone. “I’m writing a novel!” was the reply. He had written some 35000 words! He doesn’t subscribe to the mantra that because of social media, that “we are fighting a losing battle”. He is optimistic about the imaginative future.
When an audience member asked: “What do the volunteers do?” he answered: “Exactly what they’re told!” and when a PR type once enquired how he might sell more novels, his publisher responded, “Die!”
No fear of that...as Paula Spencer memorably said: ““One day at a time, sweet Jesus. Whoever wrote that one hadn’t a clue. A day is a feckin’ eternity!” Amen to that.