Not too many players in Ireland can say that they scored their first senior goal against Celtic - and also helped their side to victory over the famous Glasgow outfit.

Well, that’s certainly one claim to fame held by former Finn Harps player Shaun McGowan, who will forever treasure the memories from his part in the Donegal club’s unexpected 3-2 victory over a Hoops side managed at the time by Willie McStay.

Celtic came to Finn Park with a star-studded squad that included the likes of Bobo Balde, Thomas Gravesen, Stephen Pressley and Evander Sno for what was a pre-season friendly for them back in August 2007.

But they clearly underestimated promotion chasing Harps. “We were in the middle of a good run and went 19 games unbeaten in the league,” McGowan remembers.

Celtic found themselves trailing 3-0 at half-time after the Ballybofey based side hit a purple patch during a 15 minute spell that saw McGowan getting the third goal.

Having made “80 odd appearances” it was a first goal to remember. “It was more than just a friendly for us,” he noted.

Harps made 11 changes at half-time, so McGowan had no input in the second half, during which the visitors pulled two goals back to set up a cracking finish. 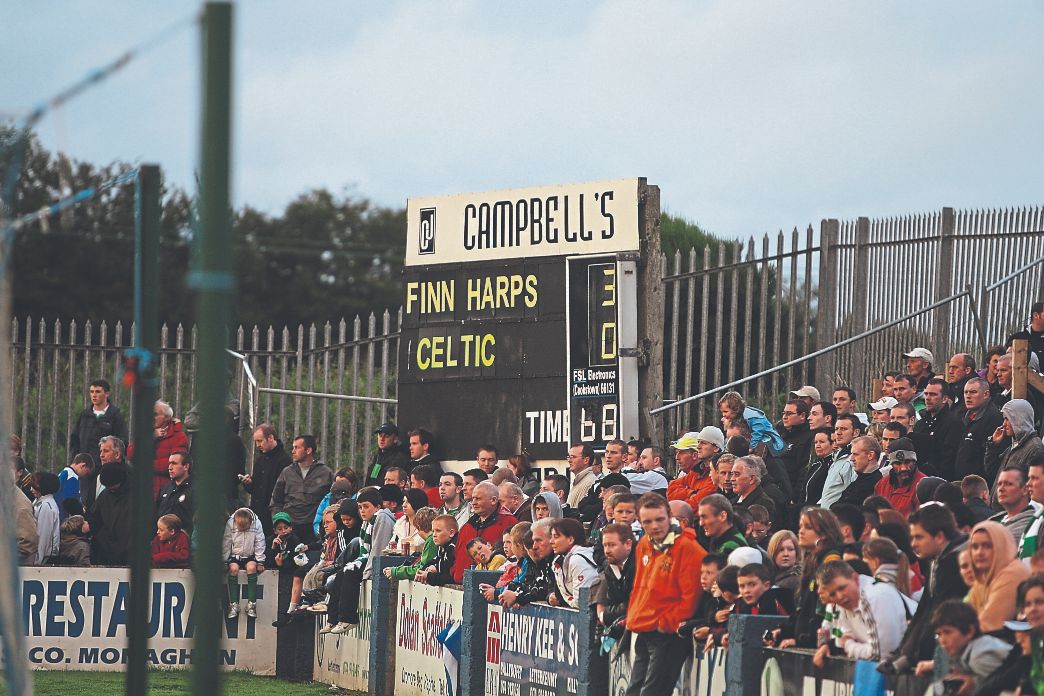 In many ways it was a strange atmosphere, as a significant proportion of the “home” fans were strong Celtic supporters.

Indeed, afterwards McGowan remembers there were youngsters looking for autographs outside the hotel where Celtic were staying.

One father told his son to get McGowan’s autograph as “he was the boy running around Graveson!”
McGowan, who initially was a right back, generally operated in midfield for Harps, and he followed up his Celtic goal with his first competitive score a few days later against Wexford Youths in an important First Division game.

“This was a more important game, we had two sent-off but I scored the only goal of the game,” he remembers.

McGowan, who played over 250 times for the club, knows all about the roller-coaster world that Harps have negotiated over the years.

His father Sean “Wizard” McGowan acted as caretaker manager on several occasions for the club, and Shaun played under him as well as a host of managers including Noel King, Felix Healy (twice), Anthony Gorman, Paul Hegarty, James Gallagher, Peter Hutton and Ollie Horgan. He was also with Harps when Jonathan Speak was in charge, but did not play a competitive game.

McGowan made his debut away to Cobh Ramblers in 2003, a season that culminated in Harps losing a promotion/relegation play-off against Derry City.

In 2004, he played several games before losing his place, and during this time he helped his local GAA club, MacCumhaills, to reach a senior county final - which they lost against Ardara.
But Healy, who had taken charge, drafted him back into a team that topped the First Division table to win promotion.

“That was massive, and it is still the only league title the club has won,” he says.
However, Harps were relegated at the end of the 2005 season. A mid-table finish was the best that they could achieve in a disappointing 2006 First Division campaign before being promoted again in 2007.

This was a period that coincided with the Celtic Tiger and back in the top flight in 2008,
Harps went down the professional road - with the club budget edging towards the €1 million mark - but they were again relegated, this time in a season that saw three of the 12 going down as the league was reconfigured.

He left Harps in 2010 to play intermediate soccer with Kildrum Tigers, before returning in 2012.
“When I signed back at Harps that year, I signed for free, I wouldn't accept any pay.
“It cost me money as I had to take time off work to play. I had agreed to this with Joey O’Leary (who was the chairman) after we met in a bar in Ballybofey on a Sunday night.”

It turned out to be a good move on the pitch for Harps as well.

Harps’ present manager Ollie Horgan took over in November 2013 and McGowan got injured in a pre-season friendly and that ended his senior days.

Now 35, he is still involved on and off the field with Ballybofey United, and is the Ulster FA Under-18 interprovincial manager, as well as coaching the Finn Valley ladies soccer team, which his daughter Katie plays for.

Indeed, she is quite a sportsperson, as she also plays Gaelic football for Robert Emmets and runs with Finn Valley AC.

Shaun, the local man, will always be a Harps fan, and when the coronavirus crisis ends, he hopes to be back at Finn Park cheering on the boys in blue once again.