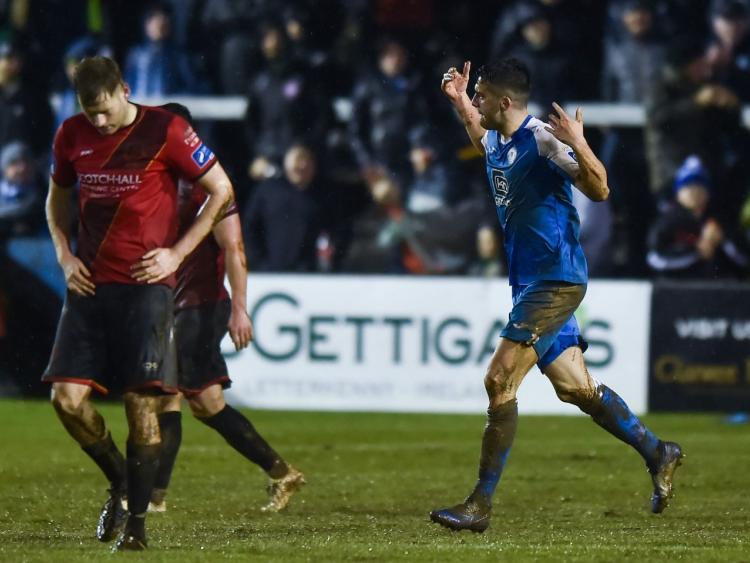 Flashback to 2019, and Harry Ascroft scores in the promotion/relegation play-off against Drogheda United. Photo: Sportsfile

Last season’s Division One champions Drogheda United may not be bracketed in the same category as either Bohemians or Dundalk, but Finn Harps boss Ollie Horgan reckons that this Saturday evening’s clash against the Boynesiders will be a hugely difficult game for the Donegal men.

Harps go into the game riding the crest of a wave after wins over the Gypsies and the Lilywhites, but this game is arguably more important.

Horgan makes the point that come the end of the season he feels that Harps and Drogheda are more likely to be in a similar area of the table than Harps and Bohemians and Dundalk.

“We would take a point now with open arms,” he declared.

Indeed, he added that if Harps can come away with a draw from the renamed Head of the Game Park it will be “an absolutely savage point.”

He disclosed that when the fixture list came out, the Drogheda game was always going to be of crucial importance.

In essence, it is results against the likes of Drogheda more than the aforementioned two teams that are likely to have a bigger influence on where Harps finish.

That said, Harps are in bonus territory thanks to their 100% start to the Premier Division campaign and even a draw in Drogheda would guarantee them at least a share of top spot after the weekend games.

Naturally, Harps will be hoping to go one better and to bag all three points to cement their position at the summit and continue their whirlwind start.

Their next game is then at home to Waterford, which based on matters so far, will be seen as another possible victory for Harps.

Horgan has enjoyed a decent record in meetings against Drogheda down through the years.

In November 2019, Harps won the Promotion/Relegation play-off 2-1 on aggregate against the Louth side. Goals from Mark Russell and Harry Ascroft, in extra-time, enabled Harps to win 2-0 and overturn the first-leg 1-0 defeat.

But Horgan points out that there has been precious little between Harps and Drogheda sides in all their meetings of recent times.

And, significantly, he feels that the Drogs have invested well in strengthening their squad since being crowned Division One champions.

As Horgan notes, they have signed players with plenty of experience, some of whom have won league titles.

On the injury front, Harps have some doubts about in-form striker Adam Foley.

While delighted with the start to the season, Horgan acknowledges that Harps have had the rub of the green in their two games so far, with both of their opponents being conceding goals following errors.

But having endured a few occasions when the opposite was the case, it’s nice to get this bounce.

Expectations will be high amongst Harps’ fans that they can make it three wins on the trot.

But, Horgan cautions that Drogheda are a “very good side” and getting a share of the spoils may well represent a really decent return.

Drogheda won their opening game at home to Waterford but lost last weekend as they conceded a last-gasp goal in a 2-1 defeat by St. Patrick’s Athletic.

Kick-off at Head of the Game Park is at 6.00 pm on Saturday. The game will be streamed live on watchloi.ie - with a €5 charge for those without a season pass.