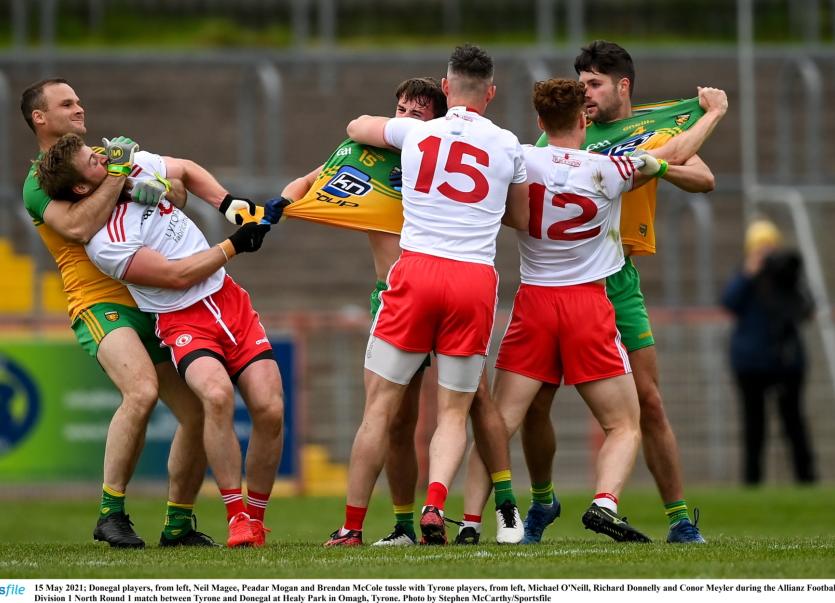 Donegal looked sharp as they got their league campaign off to a good start with victory over Tyrone in Healy Park, Omagh.
TYRONE 0-16
DONEGAL 0-18
In a very close encounter, a red card handed out to Michael O'Neill early in the second half was a big turning point.
Tyrone were on the back foot after that and found it hard until near the end to get scores. It didn't help that they hit 13 wides.
It was championship pace from the first whistle with many scuffles off the ball. But it was also rivetting viewing with both sides going on all out attack.
Michael Murphy had Donegal on the board inside 13 seconds after Michael Langan won the throw-in. Paul Donaghy levelled for Tyrone from a free and Michael O'Neill went forward to put them ahead.
Patrick McBrearty levelled before Conor McKenna, who looked dangerous, traded points with Michael Langan.
It was level again at 0-4 each with Paul Donaghy and Murphy pointing just after Conor McKenna was almost in for a Tyrone goal, denied by Shaun Patton.
Michael Murphty and Jamie Brennan (from distance) pushed Donegal two clear but Conor Meyler punished a turnover in the Donegal defence.
Two quick fire points from Michael Murphy and Niall O'Donnell had Donegal three clear on 27 minutes, but in a flash Tyrone were back on terms through Kieran McGeary and two from impressive newcomer Paul Donaghy.
Ciaran Thompson lofted another to Donegal ahead but again Tyrone responded with Shaun Patton having to go full length to push an effort for a point from Kieran McGeary around the post for a '45'. Niall Morgan came forward to level matters at 0-9 each.
There was time for two more points with Patrick McBrearty finishing a great move started by Paul Brennan while Paul Donaghy levelled matters for the seventh time.
Half-time: Tyrone 0-10, Donegal 0-10.
The second half was much more cagey and Tyrone were dealt a blow when Michael O'Neill picked up a second yellow card to reduce the Red Hands to 14 after 40 minutes.
Donegal took advantage with Jamie Brennan, Michael Murphy and Patrick McBrearty (frees) to go three ahead, but Tyrone were denied a goal when Conor McKenna tested Shaun Patton, but the St Eunan's man pushed his shot out for a '45'. Paul Donaghy found the range to leave it 0-13 to 0-11 after 52 minutes.
It was to be Tyrone's only point before the water break while Patrick McBrearty hit a long range free to leave Donegal three ahead once more.
Paul Donaghy hit a freebut Ciaran Thompson hit a mighty point from distance.
Donaghy then had Tyrone's first point from play in the second half and then repeated the act to cut the lead to two with four minutes left.
Michael Murphy hit a wonderful score but Mark Bradley cancelled that with four minutes of added time to be played.
But Donegal held on a famous victory.