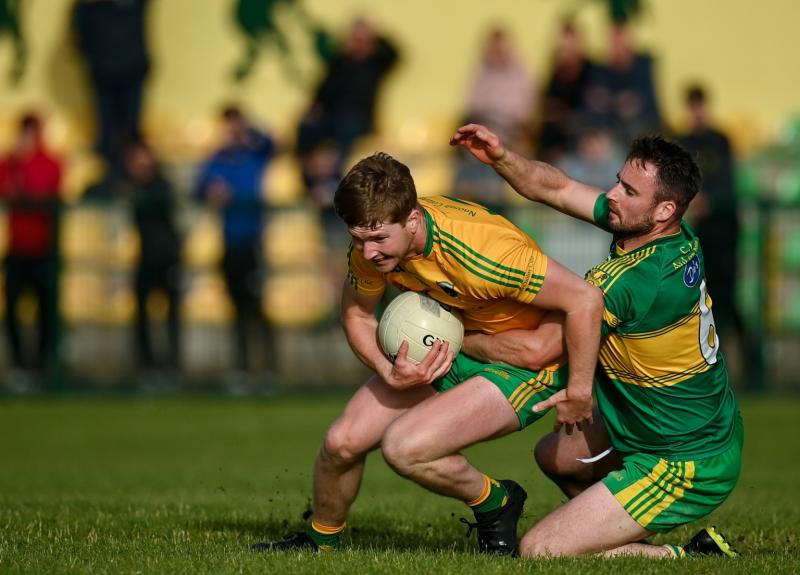 Ryan Gillespie was the match-winner for Naomh Columba today

Naomh Columba made an excellent start to the IFC with a win over Cloughaneely at Páirc Naomh Fhionán.

Cloughaneely were also without Jason McGee who’s straight red card suspension from the 2020 county final spilled over into their 2021 championship opener.

Naomh Columba were reduced to 14 men 10 mins into the game when Fionn Gallagher was shown a straight red for a striking offence; however Cloughaneely failed to make the extra man count while Naomh Columba upped the ante to compensate for the loss.

The Naomh Columba goal, which was the difference for much of the game, came in the seventh minute when Ryan Gillespie secured a rebounded ball and neatly rounded it past the keeper.

This was then quickly backed up by a Lanty Molloy point. Excluding the goal, the first half mainly progressed on a point for point basis with Blake McGarvey, Darren Ferry, Shaun Maguire, Darren McGeever and Conor Coyle all contributing for the home side and Ryan Gillespie, Lanty Molloy, Eric Carr, Pauric Ward all hitting the target for Naomh Columba.

With four points in it going into the second half, Cloughaneely opened strongly with Conor Coyle and Paul Sweeney securing the opening points. They came within one point of Naomh Columba in the 43rd minute thanks to the efforts of Sweeney and John Fitzgerald however Naomh Columba never looked like losing and points from Kevin McNern and Ryan Gillespie pushed the lead back out to three.

Cloughaneely were dealt a blow in the 53rd minute when substitute Mark Harley was shown the sideline. Both sides contributed further points in the dying minutes however Cloughaneely were continually left chasing and Naomh Columba walked away with the valuable points.