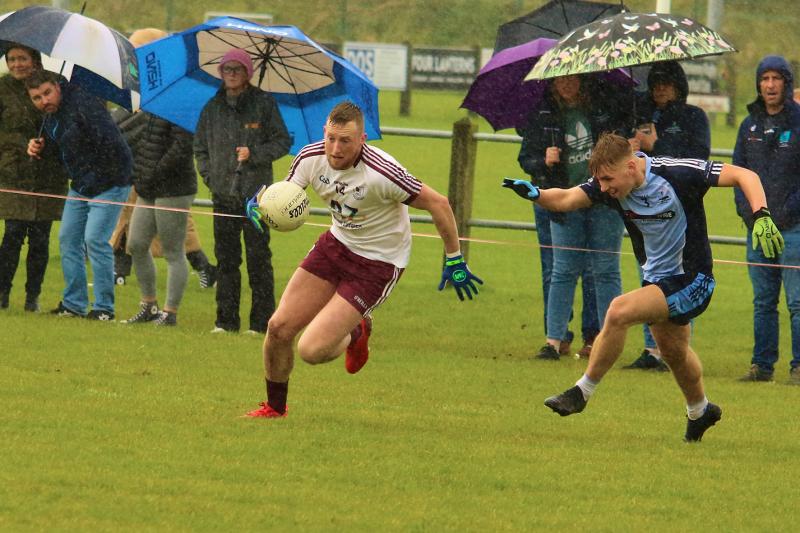 Letterkenny Gaels have made it through to another Donegal Junior A championship semi-final after a gigantic struggle with Moville at the Glebe.

Just a point separated the sides at the finish with Moville ruing number a good scoring chances. The Inishowen men deserved at least a draw after they came from five points down early in the second half.

Letterkenny Gaels had a strong breeze in their back in the first half and Conor McBrearfty and Cormac Cannon posted points before Moville got time to draw a first breath.

But two points was the furthest the locals got ahead as Ciaran Diver and the lively Josh Lafferty, Eoin Doherty, and Danny Murphy hit first half points for the visitors.

And the Gaels knew they had a fight on their hands when referee Clint Marron called half-time. Sean McBrearty’s side were just a point up, 0-6 to 0-5.

Paddy Doherty, with a fine strike, also got his name on the scoresheet for the home team. And Cannon also converted a close-in frees to bring his first half tally to three.

Gaels went three points up on the resumption with quickfire points from Brian Diver and Cannon. And they were still three up, 0-9 to 0-6, at the second water-break. Then, Kevin Lagan and Paddy Doherty raised white flags and the margin was out to five, 0-11 to 0-6, with a little under eight minutes on the clock.

Moville looked in real bother and they were also down a man after Ciaran Diver picked up a black card. Looking down the barrel and with only one point to show for 20 wind-assisted minutes, Padraic Skelly and Malachy McDermott took over in the midfield and the locals were on the back foot for the closing 10 minutes.

The ageless McDermott, a junior championship winner back in 2009, rolled back the clock and posted four points without response to reduce the margin to one with the clock ticking well into injury time.

It was a nervous time for the locals but Conor Browne and his defence held on. Letterkenny Gaels will now face Na Rossa in the semi-final.