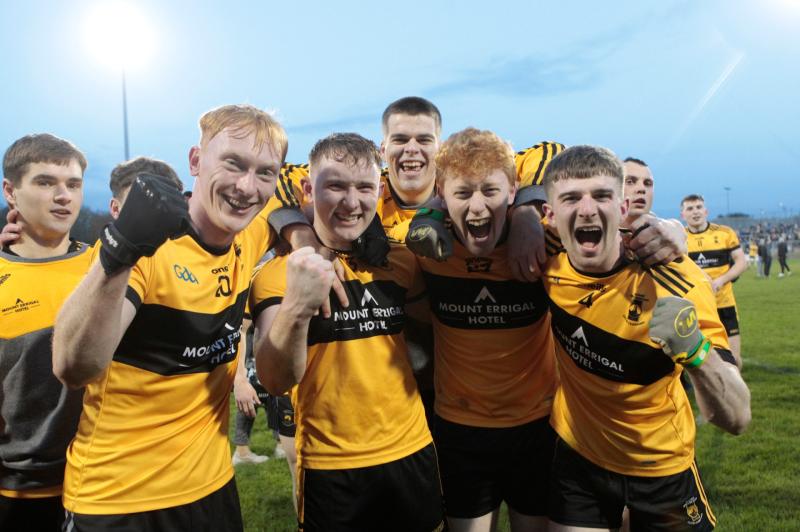 It was written in the stars. St Eunan's were fancied by many at the start of the 2021 season to make the breakthrough. Yet after the group stages, many of those who had placed their faith in Rory Kavanagh's charges had changed their tune.

Sunday last in MacCumhaill Park, Ballybofey proved once again that finals can take on a life of their own. The old cliché of the team that performs on the day will most likely always win came to pass once more.

The Gods looked down kindly on St Eunan's with the weather clearing up half-way through Saturday and by 3.15 pm on Sunday afternoon, MacCumhaill Park looked transformed. From a distance it looked like a summer sod, but those who walked it said that it was soft from the 35m line to the goals at both ends.

But that apart, the day was without a breath of wind, perfect for the team that wanted to play attacking football.

We waited with bated breath for football to break out in the opening quarter. One point for each side; it was not a great advertisement for Donegal club football. God help those watching on TG4. In the press box we wondered would the Co Board's social media man, Damian Carr, fall into slumberland.

Maybe there was something in the water that brought about a slight change after the water break. And thank goodness for Eoin McGeehin. The game needed a slap in the face; McGeehin got free from his man and for once found acres of space where none seemed to exist up to then.

Seconds before that young Kieran Tobin contested the kick-out and turned the ball over; Peter McEniff did the rest with his left boot, finding McGeehin with an inch-perfect pass and McGeehin did what he does best, find the net.

The game and our faith in football in the county was rescued in a few seconds. Up until that moment we were in danger of being the laughing stock for the entire country looking in.

We waited for the Naomh Conaill response. Ciaran Thompson and Leo McLoone did their best to rally their forces, but for once their foot soldiers couldn't muster that resilience that was so evident in their previous two games.

Was Manus Boyle right when he said that they had peaked at least three times during the last few months already - for the 2020 county final and then for Gaoth Dobhair and Kilcar?

His words seemed prophetic. At the final whistle I got a WhatsApp from him: "Told ya".

For the second time in six consecutive appearances Naomh Conaill could only muster one second half point.

On the other hand, St Eunan's, once they got the margin out to five or six, began to express themselves like a really good team. They had their homework done. They were prepared to be patient for the opening quarter; stay away from contact and wait for the opening.

They can thank that young trio for creating and finishing that opening. The freedom of youth with no fear was rewarded.

They have been waiting in the wings for three years. We had been warned; two one point defeats at semi-final level against much the same Naomh Conaill side.

With the gift of benefit of hindsight, it wasn't such a shock after all.

Before last weekend the talk was that Naomh Conaill would dominate football in Donegal for the foreseeable.

Now you can substitute St Eunan's for Naomh Conaill. They won the Reserve title on Sunday also by 25 points with many players who are good enough to play senior football. In many ways they are in an even stronger position that Naomh Conaill have been for the last six years, chiefly because they have better scoregetters.

If there was a chink in the Naomh Conaill armour, it was their ability (and sometimes an unwillingness) to go out and amass a big score. They have been operating this year without their top forward, Eoghan McGettigan, which was a factor.

But, no doubt, they will come again. That is what they do. They have been at this stage before. It would be great to see them throw off the shackles and have a go.

St Eunan's have done the one-in-a-row. Let's hope they can give Ulster a go. That will be a great platform for them to showcase their talent. Donegal club football needs a boost at the minute.