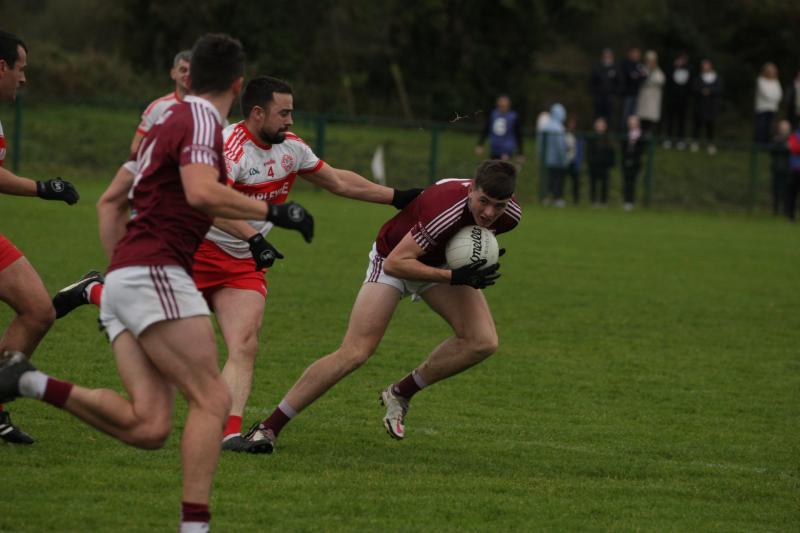 Francie’s Friel’s young Termon side struck late to seal a route back into Division One against hapless Glenfin - with literally the last kick of the game - to seal their promotion to Division 1.

Termon wing forward Jack Alcorn’s speculative lob deceived Glenfin’s tall keeper Andrew Wash who came off his line and seemed to slip as the ball sailed in over his head to the net in the Division 2 promotion play-off.

It was literally the last kick of the game and sheer ecstasy for Termon as shell-shocked Glenfin fell to the ground in despair. For they seemed to be cruising as they led by 2-9 to 0-8 with nine minutes left.

But, the winners got a strong scent of hope when Jamie Grant and Ricky Gallagher landed two fine points. It got even better when midfielder Ryan McFadden was hauled down in the square and sub Daire McDaid confidently dispatched the penalty to leave the score at 2-9 to 1-10 with time running.

Suddenly the spectre of an upset loomed for Glenfin, who had led for 57 minutes. They had two chances of points to clinch it but Karl McGlynn hit wide and Stephen Carr’s effort came agonisingly off the post.

But they can have few real complaints, as despite creating several chances, they hit 12 wides. And for long periods it looked like those two well executed goals from Stephen and Gerard Ward would see them through.

But full credit to this tall young Termon team who never gave up and were ultimately rewarded by Lady Luck. Glenfin looked to be the far more enterprising side from the start and were buoyed by the return from injury of the talismanic Frank McGlynn.

But it took four minutes for the first score to arrive when Jason Morrow pointed after a one-two involving McGlynn. But they also managed to hit threes.

Aaron McGlynn eased the more impressive Glenfin into the lead and then Gerard Ward, one of the most impressive club forwards in the county, clipped over a neat point to put the winners into a 0-3 to 0-1 lead just before the first water break.

Bobby McGettigan and Mark McGinty (Jnr) traded points before Glenfin struck for the first of their two goals.

Odhran McGlyn and Jason Morrow unlocked the Termon defence for Stephen Ward to punch to the net and they were well worth their half time lead of 1-6 to 0-4.

Jack Alcorn and Gerard Ward swapped points on the restart and the busy Anthony Grant made it 1-7 to 0-7 as sharpshooter Daire McDaid came on for Caolan Gallagher.

And it looked grim for the winners when Glenfin’s Gerard Ward found himself clear on goal and shepherded the ball home to leave his side ahead by 2-9 to 0-8.

But gritty and youthful Termon dug deep and carved out a sensational victory.