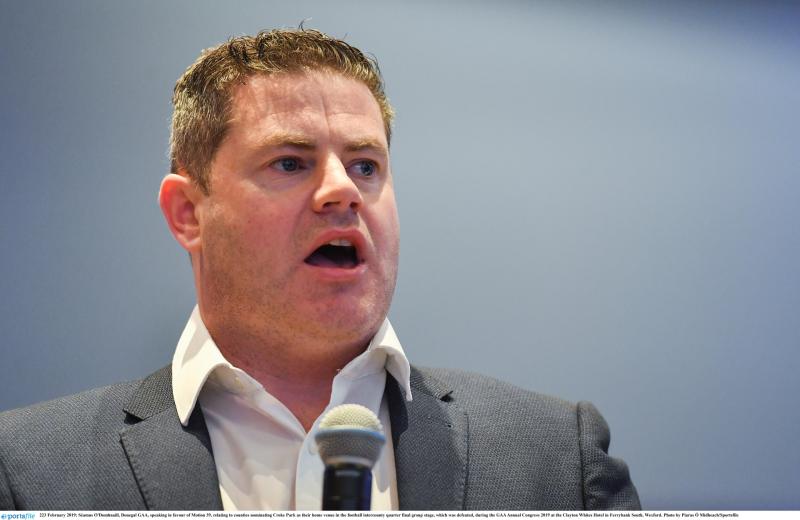 Donegal GAA Convention is going to have to elect a new vice-chairman at next month’s Annual County Convention.

This follows confirmation from the outgoing vice-chairman Seamus O’Domhnaill that he is not seeking another year in the position at Convention.

“It is with regret that I'm stepping down for now from the job purely for personal family reasons at the moment,” he said. “The vice-chairman position through chairmanship of the CCC is a very busy and demanding job and I just cannot give the time commitment that it requires at the moment.

“I’ve enjoyed my time in the job and I have worked with very good people over the last few years on the executive and in the clubs. And who knows I may be back in the future but for now I just can’t give the commitment required.”

The Democrat has learned that former chairman and team manager PJ McGowan and Aodh Ruadh’s David McLoone, a former Development Officer, are the only two nominees for the vice-chairman position.

The deadline for nominations for positions and motions closed on Friday last.
St Mary's Convoy club’s Sinead Breen is set to fill the vacant assistant secretary position. The position has been vacant since Ed Byrne resigned in the middle of the season.

Byrne is among a number others who have received nominations for the position, but it is believed they have all withdrawn from the race.

Another interesting nomination for a place at the top table is St Eunan’s club man Michael McGeehin. The well-known coach and Sport Ireland executive has been nominated for the position of coaching officer.

Conor McDermott, from St Mary’s Convoy, is outgoing coaching officer but is stepping down under the five-year rule.
The two representative positions on the Ulster Council alway attract a good deal of interest and this year is no different.

Brendan Kelly, St Mary’s Convoy and Fergus McGee, St Eunan’s, are the outgoing representatives. And they are believed to be interested in remaining on the provincial body.

But they are being opposed by Ed Byrne, who is believed to be interested in returning to the position he held a couple of years ago. Pat Walsh, Bundoran and  McLoone, from Aodh Ruadh. This year’s Convention is on Monday December 13 and is expected to be online again for the second year in a row.