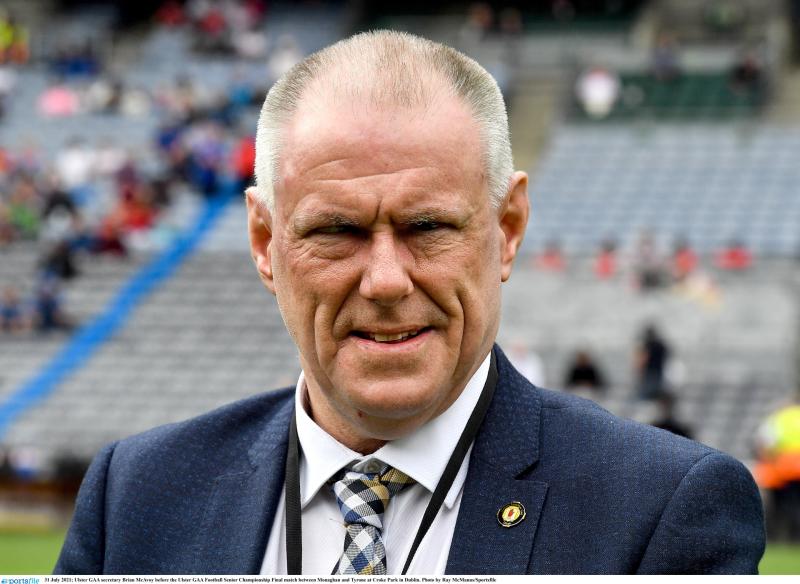 The Ulster GAA secretary and CEO, Brian McAvoy, in his annual report to Ulster Convention has called time on the 'Four Step' rule in Gaelic football.

The wide-ranging report to the Ulster Convention to be held on Friday week, January 14, covers all aspects of GAA life in the province over the last year.

Mr McAvoy, in the report, refers to the 'Four Steps' rule in Gaelic football and feels a time-based rule would be more effective.

"The Canadian County Committee brought forward a motion to the February 2020 Congress seeking to amend the rule by replacing “four steps” with “two seconds.” The motion was heavily defeated, receiving the support of just 9 per cent of voters," says the secretary's report.

"The heavy defeat was undoubtedly due to a number of factors. Firstly, and significantly, it was never likely that such a fundamental rule change would be countenanced without it first being the subject of a trial and, secondly, the motion submitted by Canada applied to both Gaelic football and Hurling.

"The rule has been in place for many years and in relation to hurling it largely continues to fulfill its purpose.

"The same, however, cannot be said for football. It was introduced in an era when ‘catch and kick’ was the norm and for a player to take even four steps was something of a rarity. But the game has evolved – it has changed form a game of ‘catch and kick’ to a possession game and the rule has failed to keep pace with the evolution of the game.

"In the modern era a player can have taken four steps before you have time to blink and if a referee in Gaelic Football attempted to implement the rule there would be chaos. They therefore, understandably, choose to ignore it. Rarely is a player in possession of the ball penalised for ‘over-carrying’ (other than when he is surrounded by opposition players) and the vast majority of players take at least seven or eight steps between ‘toe-taps’ when they are moving unimpeded.

"On many occasions it’s many more as we witnessed in a recent All-Ireland final. Where a rule can’t be enforced it shouldn’t be there. Some players move so fast that it would be almost impossible for a referee to count steps in real time, especially when he has so many other matters of which to be mindful. A ‘time-based’ approach rather than a ‘steps-based’ approach is obviously the approach.

"I therefore believe that the GAA’s Standing Committee on Playing Rules should consider the issue of steps in Gaelic football with a view to bringing forward a proposal for experimentation in 2022 or 2023," says the report.