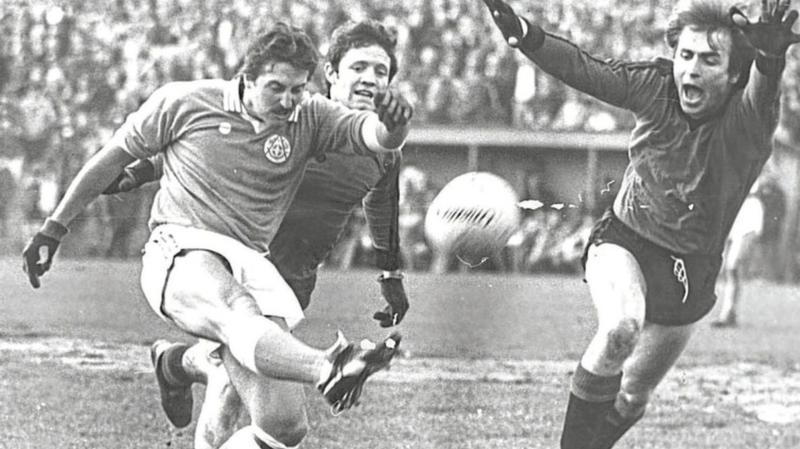 Forty years ago Armagh also came to Ballybofey for a first round game in the Ulster senior championship and snatched a one point victory thanks to a 14-yard sideline kick in the dying moments.

It was one of three late points by the Armagh side with the winning sideline kick coming from Mickey McDonald, who had also scored a goal in the first half.

McDonald, known at the time as also being a very good soccer player, is better known in recent times as the uncle of top golfer Rory McIlroy. 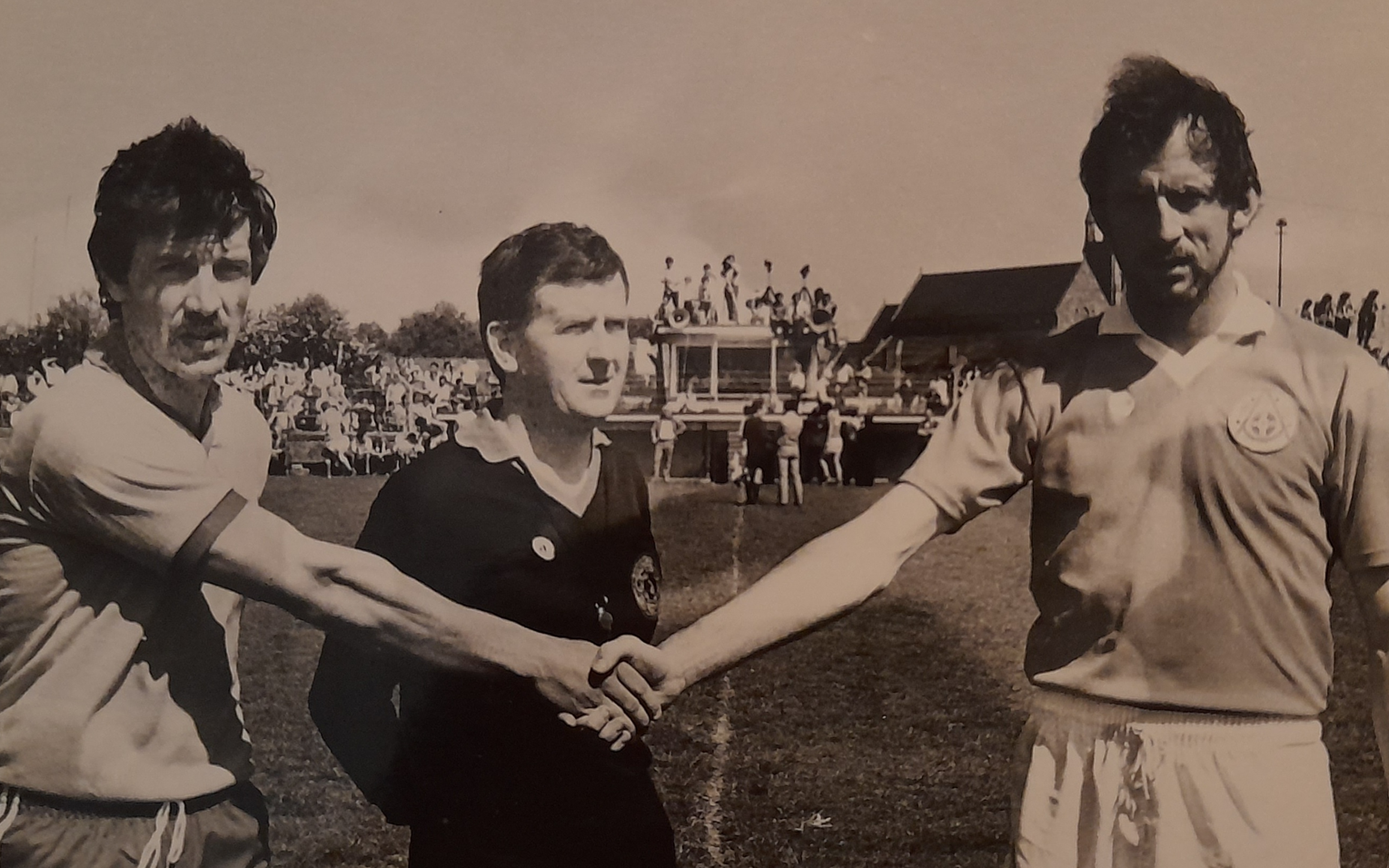 He has very good memories of that year, as Armagh went on to win the Ulster title, his one and only Ulster medal.
Speaking to the Democrat this week, McDonald says it was one of the highlights of his career and recalls clearly the opening game in MacCumhaill Park.

"We went in as underdogs. It was a lovely summer's afternoon. We had confidence in ourselves but it's not easy to go to Ballybofey and win a match.

"It was a hard, tough, good game. It was back and forth, back and forth. It was a really good match to play in, end to end championship type match. You know that you have one bite of the apple, no back door or anything then. We went on to win Ulster and that was great. That was my Ulster championship medal, only one."

As for the winning kick, McDonald recalls: "It was right on the 14 yard line and there wasn't much run up behind. It was one of the best points I ever scored. I was always a free kick taker from my days at St Colman's when we won the Hogan Cup. It was nice.

McShea's Say: 10 things Donegal must to do beat Armagh


"Even today, they can kick it out of their hands. Sometimes I think there is a lot more movement with things going on and it's harder (out of the hands). But when you practice doing it time after time after time I suppose you get used to it," said McDonald, who feels there is merit in taking those type of kicks off the ground.

There was a funny interlude to the winning kick which came to light some time afterwards in Bundoran. McDonald says: "My mum and dad were up in Bundoran the following year in Brian's (McEniff) hotel, the Great Northern Hotel. He was talking to them and it came around that I was playing and blah, blah. And he told them 'I was around the back of the goals and I caught that ball coming over the bar and I couldn't believe'. So there you go." 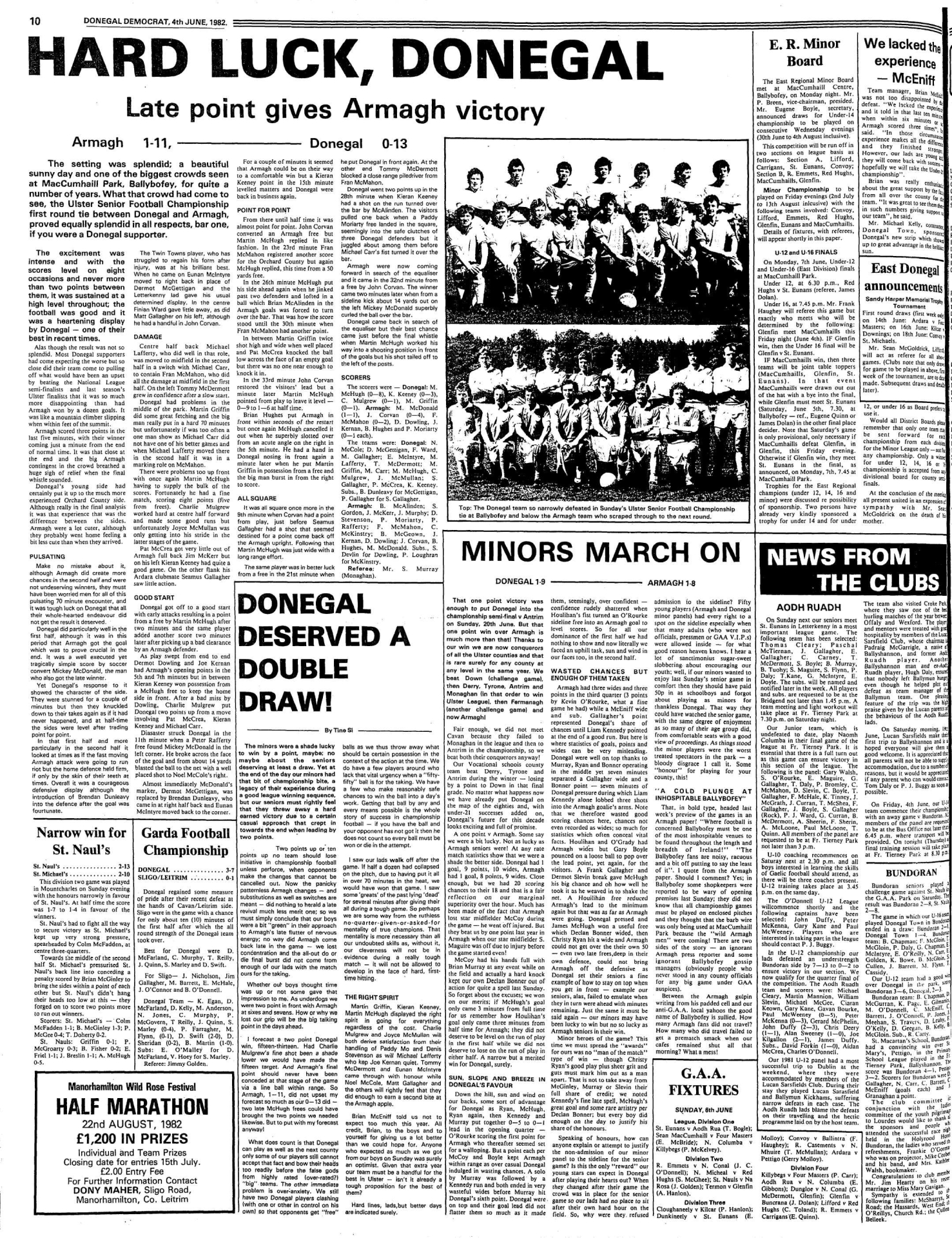 The Lurgan sharpshooter was a talented sportsman from a young age and played soccer with Glenavon and later Cliftonville and had the chance as a teenager to sign for Arsenal, but it just didn't work out. Mixing both soccer and Gaelic made it difficult for him to get a run with the Armagh senior team.

"I played soccer too and it all depended on who the manager was (with Armagh) and they brought me in. On reflection, I was a young person who loved both games and wanted to play both. But in hindsight, especially the way the Gaelic game is now, you need to concentrate on one or the other. And that's the way I would see it. It's so much more professional now, the Gaelic game, and the commitment and everything."

McEniff: ‘It makes a mockery of the whole disciplinary process’

As the Donegal GAA County Board said they had no comment to make on the recent appeals from the fallout from the meeting of Donegal and Armagh in Letterkenny, former Donegal manager Brian McEniff has spoken out

McDonald was back in MacCumhaill Park the following year as Ulster champions but a Charlie Mulgrew goal helped Donegal to victory to avenge the 1982 defeat. Indeed, Donegal would go on to win the title that year.

"We went to defend our title and in those days the team that won ultimately went out in the first round the next year. Ulster was always one of the provinces that was hard to get out of and it was then too."
Nowadays McDonald says he keeps tabs on what is happening but is not a great spectator. He says: "I try and I follow what is happening.

"I'm not a good watcher, especially when it's Armagh or my club team. I do keep an interest and I be up at the All-Ireland final every year. And Armagh have done pretty well in the First Division this year and hopefully they will go well in the championship."

Like many, he is at odds with the way the game is played now, but also feels that facets of the old game may be returning.
"In saying that and watching it, I don't want to be so discouraging about it, I find the game hard to watch with the defensive element of it. Handpassing and it's just . . . Now don't get me wrong, I'm seen some great matches these last few years. I think some of the old aspects of the game are coming back in again, which is great to see.

"But I just can't understand this mentality . . . and in a way I do, nobody wants to lose, getting everybody behind the ball and this. To me it's taking away from the whole flair and natural ability of the game. It's all about possession football now and short passing.

"But to me Tyrone won the All-Ireland last year because they went out and took scores from far out. They played it quickly and to me there were a lot of the aspects of the old type of game in it and that's why they won the All-Ireland.

"And everybody is adopting that style of football and it's not something that I admire. Even my own club who are in the Third Division now and it's hard to watch.

"It's not that I'm not interested in the game now but . . . but there are signs that some of the old style coming back."
Nowadays Mickey McDonald gets to play a bit of golf but says he is nowhere near the standard reached by his famous nephew.
"I'm nowhere near it. I wish I could say that. I would tell the McIlroys that he gets all his talent from our side of the family of course, but they are the golfers."

There was excitement a few weeks ago when Rory McIlroy came with a late run to finish second at the Masters in Augusta.
"Too little, too late. It was great to watch and I know he can do it. I was going to go over this year but I said I'd leave it until the Masters next year, so I can see him do it.

"If he had shot one or two under in the first two rounds, had poor third round and did that on the final day, it would have been great. He was freed up the last day and he went for it, and that's the way he should play.

"I was talking to a friend of mine in Offaly and he was texting me when it was going on. At the end he said 'at least we have two Irishmen in the first three' which was great".

As for Sunday next, McDonald says he has great memories of 1982. "It was one of my happy memories. Getting through in that game and then winning the Ulster championship. I hope Armagh do the same again but it's not going to be that easy."
Asked if his county get a sideline kick near the 14 yard line on Sunday, would they go for it, he laughs.

"Now, now come on, what do you think they'll do? Of course they'll play it out the field. Some of the teams I'm watching, they have to be sure. They have to be 15, 20 yards out before they will take a shot. It's as if they are trying to work it in for a goal all the time, but it's not."

And who will win the game? "I can't wish Donegal luck, but as long as it's a good game of Gaelic football, maybe we will see some of the highlights of the old game."