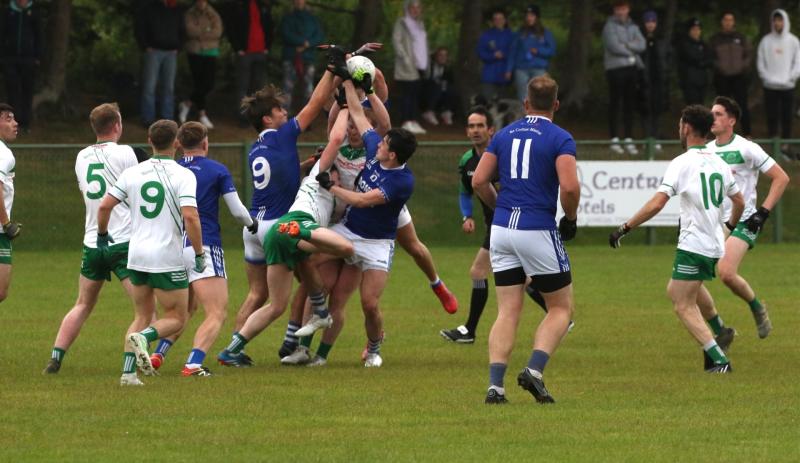 As derby matches go, this hard- fought affair had a bit of everything, with a few lovely scores, crunching tackles, a deserved sending off and loads of loud “advice” from both camps to Naomh Columba referee Kevin McGinley from a very big crowd.

In the end it was two very well taken points from Four Masters substitute Dermot Slevin and the pacy Alex McCalmont that sealed victory for the visitors against a gritty home side who lost their first half substitute Danny McDyer to a straight red card for what appeared to be a punch on outstanding Masters midfielder Richard O’Rourke in the 23rd minute.

It was a double whammy blow to the home side as McDyer had just replaced the experienced Stuart Johnston a few minutes previously as Masters led by 0-4 to 0-2 playing into a stiff breeze.

Ironically McDyer’s sending off spurred the home side as they tagged on three points in as many minutes from marksman Stephen Griffin and veteran Shane Conneely to put them into a 0-5 to 0-4 lead at the break.

Youthful Four Masters dominated the first quarter and moved into an early 0-3 to 0-0 lead thanks to points from the impressive Jamie Crawford, McCalmont and Joe Leape by the 6th minute.

It took Naul’s a full ten minutes to get on the board through a Stephen Griffin free.

Jason Deignan of Four Masters and Kyle Campbell traded points before the flashpoint where McDyer was lined.

The visitors had the big breeze after half time but Naul’s centre-back Ian Campbell raised a big cheer when he landed a well struck effort into the wind in the 33rd minute.

But that was to be the home side’s last score in a full blooded second half.

Although a man down, St Naul’s contained their neighbours for long spells as players from both sides were hitting the ground with considerable regularity and then making quick recoveries which added to the time allocated as darkness began to fall.

Masters had three bad wides before the inevitable Crawford levelled matters with two points for the visitors by the 45th minute.

Masters then made a double substitution with Dermot Slevin and Dylan Muldoon coming in for Joe Leape and Darragh Geary.

Slevin was only on the field for just over a minute when he showed great composure to slot his side into the lead.

14 man Naul’s tried hard to fashion a reply as the tackles thudded in with increasing ferocity.

And they could have been further behind but for a brilliant stop from keeper Cathal Charlton to deny McCalmont a certain goal at the expense of an unconverted '45'.