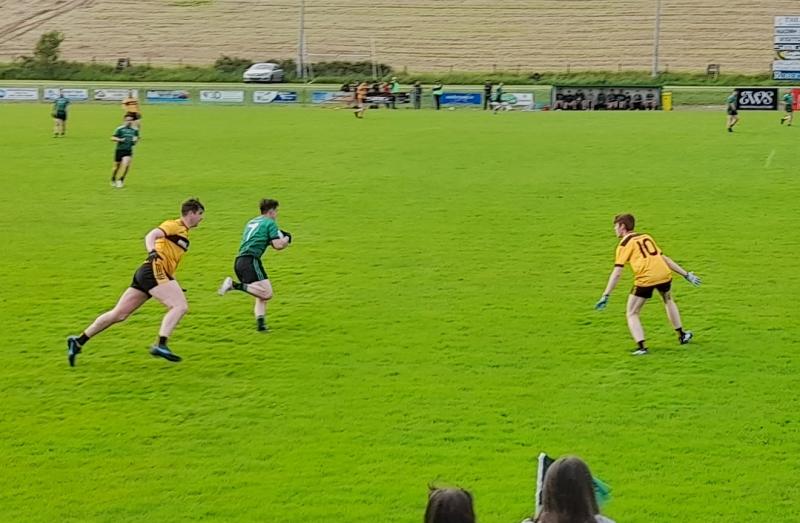 Eoin Quinn on the attack for Naomh Brid against Naomh Ultan

A very depleted Naomh Ultan made Naomh Brid fight all the way for the league points in Trummon on Saturday evening.

On an evening that was borrowed from winter, the only highlight of the opening half was a Naomh Brid goal on 23 minutes that put them into a lead that they would never relinquish.

The half-time scoreline of Naomh Brid 1-2 to Naomh Ultan's 0-4, didn't do justice to the performance of the visitors, who were probably slightly the better side in the opening half. Naomh Ultan were barely able to field with Liam Kennedy togging out as one of two substitutes.

Scores were at a premium in the opening quarter with Naomh Ultan ahead by 0-2 to 0-1, points from Cian Kennedy and Kyle Breslin to an opening point from Declan McCafferty. Naomh Ultan almost had a goal on seven minutes when a free was lofted towards the Naomh Brid goal and veteran full-forward, Adrian Nesbitt, won the break but Pauric McDaid stopped his effort.

The goal on 23 minutes turned the game and it was well taken. A turnover forced by Tommy Gallagher saw Ryan Brogan take off and Eoin McGarrigle was riding shotgun to power through and fire to the net.

Glenfin impress again to see of Bundoran in high-scoring affair

Pairc Taobhoige played host to an entertaining spectacle on Friday night, with Glenfin winning for a sixth time this season

But Naomh Ultan finished the half well with a Patrick White free and another Cian Kennedy point to be just a point adrift after playing against the breeze.

Eoin  Rush pushed Naomh Brid two clear early in the second half but points from two Cian Kennedy frees had the sides level after 40 minutes.

Callum Gallagher edged Naomh Brid back in front on 45 minutes from a 40m free and Eoin Rush added two quick frees inside four minutes by the 51st minute.

But Naomh Ultan had chances with Patrick White off target with two frees. Naomh Brid had the best score of the game on 22 minutes when Eoin Quinn bombed forward to point. Patrick White did hit back with Naomh Ultan's final score but the home side were now on top and Declan McCafferty pointed before Liam Duffy came forward to find a second goal and seal the win.