Defeat for Donegal against Cork in TG4 All-Ireland Senior Championship 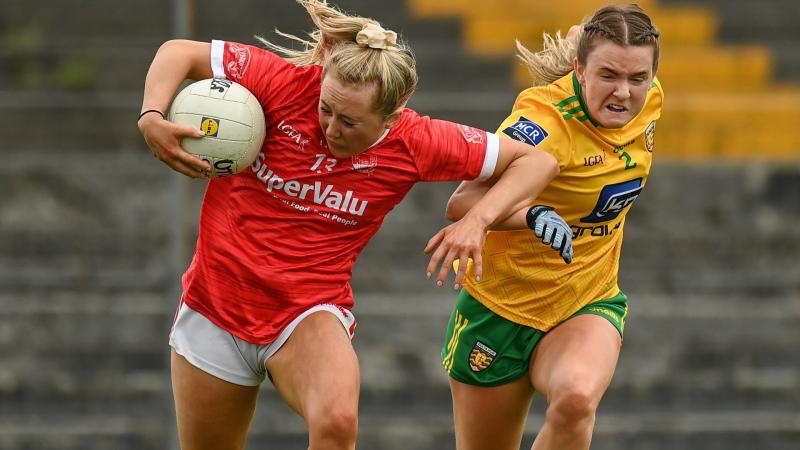 Niamh Carr in action for Donegal against Cork last season

Doireann O'Sullivan scored 1-5 as Cork withstood a second half comeback to get their TG4 All-Ireland Senior Championship campaign off to a winning start with victory over Donegal in Clane.

Fresh from their Munster final success, Shane Ronayne’s side picked up a merited Group D victory thanks to a terrific first half performance. Donegal bit back in the second half however, outscoring their opponents eight points to three. It still wasn’t enough to prevent a Cork victory at the end of a scrappy encounter.

An explosive start saw Libby Coppinger split the posts with Cork’s first attack. Orla Finn and Yvonne Bonner found the net at either end immediately after, to cap off a cracking early period. Ciara O’Sullivan and Laura O’Mahony efforts stretched Cork’s lead prior to Meabh O’Sullivan producing two saves of the highest quality to deny Donegal.

Cork dominated the remainder of the half with Ciara O’Sullivan setting up her sister Doireann for a well-taken ninth minute goal. Geraldine McLaughlin and Karen Guthrie (free) scores were Donegal’s only replies before going in at half-time, 2-9 to 1-2 behind.

A disappointing third quarter failed to produce a score from open play. Donegal used a succession of Geraldine McLaughlin and Karen Guthrie frees to eat into their opponent’s lead and there was only a goal in it with 10 minutes left to play.

Meabh Cahalane and Nicole McLaughlin were sin-binned in the closing stages where three Doireann O’Sullivan scores helped Cork win it out.