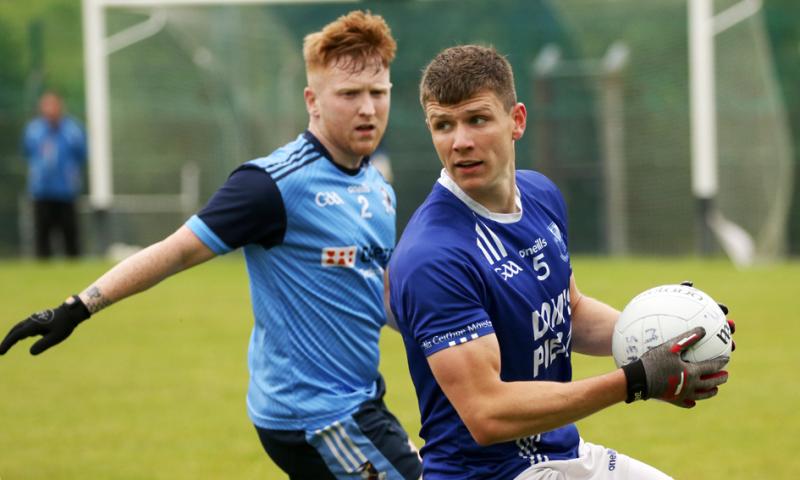 Barrett the difference in good contest in Tirconaill Park

Kane Barrett, not for the first time, stepped up for Milford as they took home the league points from their visit to Donegal Town.

On a day when both sides played better against the swirling cold breeze, this was an entertaining contest played out by two mostly young sides.

Milford had the advantage of the wind in the opening half but hit six wides while Four Masters had eight wides in the second half.

There was plenty of entertainment for the small attendance with both teams playing attacking football, a rare occurrence in Donegal. The sides were all square at the break at 1-6 each in a first half that swayed both ways.

Kane Barrett and Tony McNamee set the trend with points on 30 seconds and three minutes for the visitors before Four Masters hit back to be 0-4 to 0-2 ahead by the 11th minute - their points coming from Leo McHugh, Jamie Crawford (free), Alex McCalmont and Joe Leape with the best of the four.

But within two minutes Kane Barrett had the sides level, winning and pointing a free and then hitting a great score from distance.

McNamee set up Gary Merritt for a good goal chance but he wasn't able to finish while Dermot Slevin edged Four Masters ahead again.

Darragh Black levelled but after good work by Alex McCalmont, Jamie Crawford showed his soccer skills to round the Milford 'keeper and slide home the first goal on 19 minutes.

Milford weren't put off and Conor Gorman hit a good point after a short '45' and then Gary Merritt was put through a second time and this time he didn't miss on 25 minutes. Two minutes from the break, Cian Hegarty won and pointed a free to leave it all square.


Jamie Crawford had a goal chance at the start of the second half after he won a high effort for a point from Dermot Slevin, but he pulled his shot wide of the posts.

Kane Barrett pushed Milford two clear from two frees while Cian Hegarty had a big chance for Four Masters but blasted his effort just over the bar on 39 minutes.

Two more from Barrrett (a mark and a brilliant effort from play) had Milford three clear by the 48th minute and Four Masters just couldn't make any headway with Tony McNamee playing the sweeper role.

Dermot Slevin (free) and Paddy Ferry traded points before another Slevin free and a point from Alex McCalmont cut the lead to one with two minutes left.

But Milford closed out the game with points from Darragh Black and man of the match Kane Barrett to run out narrow winners.

Apart from Kane Barrett, Milford had plenty of energy from Darragh Black, Tony McNamee and Gary Merritt while Anthony Curran impressed at half-back.

Four Masters were without Richard O'Rourke but they had plenty of possession but their shot selection in the second half didn't help.