Danny O'Donnell's Naomh Muire side were pushed all the way by Na Rossa and were thankful of goalkeeper Danny Ward, who made two vital saves - one from a penalty - as they sealed promotion 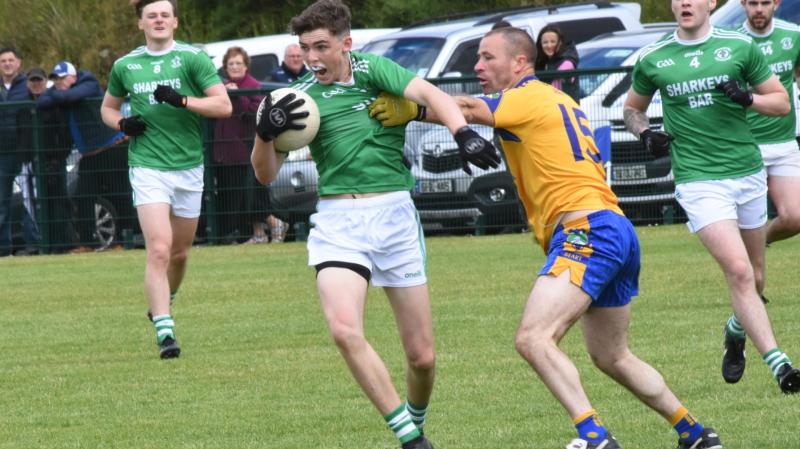 Naomh Muire are back in Division 2 of the Donegal All-County Football League with a narrow win over Na Rossa in Dungloe in the Division 3 promotion play-off with Declan Ward’s penalty save a key moment.

Naomh Muire were the better side for most of the first half and with Tuathal Leunney and Adam O’Brien lording it at midfield. And playing with a strong breeze and away from the main road goals  they hit the game’s opening scores - Eoin Martin and veteran Harry Harden the scorers.

And while Cillian Bonner pulled a point back for Na Rossa, Naomh Muire were 0-5 to 0-1 up  after 19 minutes. But the men from the Lower Rosses were rocked shortly after when Na Rossa on the break struck for the first of their two goals.

The Naomh Muire defence were opened up after Oisin Caulfield chipped the ball up and ran from outside the 45 to plant the ball in the roof of Ward's net. But  Naomh Muire's response was a good one and they post the last three points of the half to lead 0-8 to 1-1 at half-time.

Na Rossa, with the breeze in their backs and veteran John Paul McCready replacing Aidan McCahill in the middle of field, got the second half up and running with an Aidan McHugh point.

Kilcar survived a last second goal chance from Ciaran Thompson of Naomh Conaill to take home the Democrat Cup as Brian McCormick Division 1 winners for the 15th time in their history.

And then seconds later Odhran Molloy rattled the Naomh Muire net for Na Rossa’s second goal the game was all square - Naomh Muire 0-8, Na Rossa 2-2. Molloy was back in the thick of the action soon after when he was fouled as he bore down on the Naomh Muire posts. Referee Martin Coll pointed to the penalty spot.

That was five minutes into the second period and a big moment in the game. When Ward turned Aidan McHugh’s strike from the spot around the post for a 45, Naomh Muire survived.

Molloy did go in front on 40 minutes with Molloy knocking over and they were still in front 2-4 to 0-9 by the three-quarter mark.

But Naomh Muire finished strong with the accurate boots of Eoin Martin and Harry Harden finished the game strong.

Ward pulled off another top class save in the closing minutes to deny Cormac McHugh’s side a late equalising goal before Joey Gillespie kicked the insurance point with the last kick of the game.