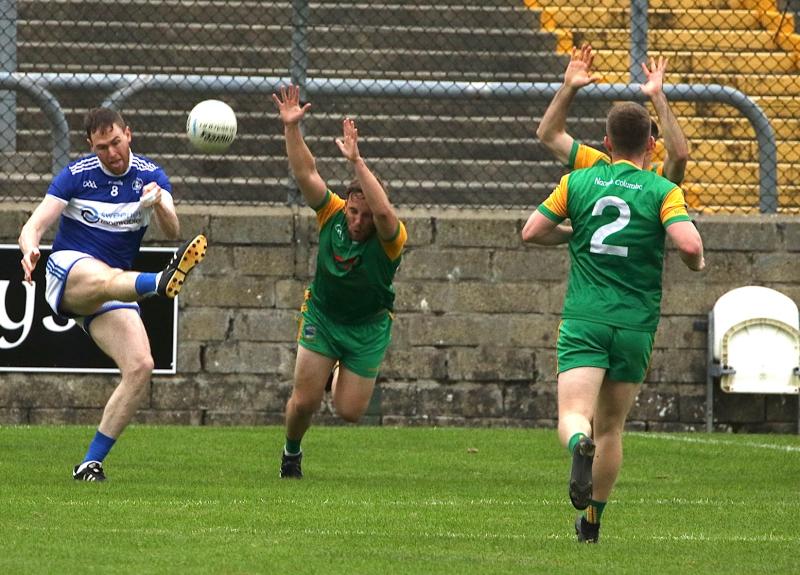 Naomh Columba marched on to the Intermediate semi-final but they were made fight all the way by a tigerish Gaeil Fhanada in MacCumhaill Park.

The win sees Naomh Columba back in an Intermediate final for the first time since 2011 and after finishing so close in recent years.

Naomh Columba took control of the game when Aaron Doherty converted a penalty just before the break but Gaeil Fhánada did well to make a game of it with two goals in the final quarter to cut an 11 point lead to four.

The era of the long high ball to a big midfielder was very much in vogue in MacCumhaill Park as Gaeil Fhánada put big Michael Sweeney on the edge of the square and it proved a real thorn for Naomh Columba for long periods of the first half.

It worked a treat after Pauric Ward put Naomh Columba ahead after 90 seconds as Oisin Shiels, Eoghan Carr, Liam McGrenaghan and Mark McAteer with Sweeney at the centre of everything.

Kevin McNern showed his leadership qualities to hit a much needed Naomh Columba point on 16 minutes and after a kick-out was turned over Pauric Hegarty cut the lead to the minimum.

Michael Sweeney continued to cause trouble, winning a mark and pointing but Naomh Columba were back on terms by the 26th minute with points from a Ryan Gillespie free and the point of the half from Aaron Doherty.

A real big turning point came a couple of minutes into added time when Aaron Doherty was turned over and big Michael Sweeney saw acres of space inside the Naomh Columba defence. He punched forward and Patrick Carr followed. Naomh Columba 'keeper was caught in no man's land but the bounce just beat Carr and worse was to follow as Naomh Columba came back up the field for Kevin McNern to draw a foul from Matthew Gallagher and referee Val Murray had no hesitation in pointing to the spot. Aaron Doherty fired the penalty to the corner of the net.

There was still time for Liam McGrenaghan to fire over a very good response and leave it Naomh Columba 1-5, Gaeil Fhánada 0-6.

Gaeil Fhánada hit three wides in two minutes before Ryan Gillespie somehow managed to put the ball over the crossbar rather than under when straight through at the other end.

Eric Carr came to life with two good points in as many minutes as darkness began to fall. Kevin McNern had an open goal but managed to also blast over and a 1-9  to 0- 6 lead after. 43 minutes  but Eoghan Carr gave Fanad a lifeline with two quick points in a minute.

But Naomh Columba took a big step towards the final when Kevin McNern was on hand to receive a Lanty Molloy pass and this time he found the net and put his side seven ahead with 10 minutes left.

And just to underline their great approach work Kevin McNern finished a third goal after a great pass from Fionn Gallagher. But Fanad hit back with Mark McAteer finishing from close range after Michael Sweeney broke another high ball.

The fat was back in the fire when Sweeney got his fist to another high delivery and the ball hit the net. Aaron Doherty and Mark McAteer traded points.

Ryan Gillespie closed out the scoring with a fourth Naomh Columba goal on the stroke of time. After the final whistle there was a melee which marred what was a very good game.