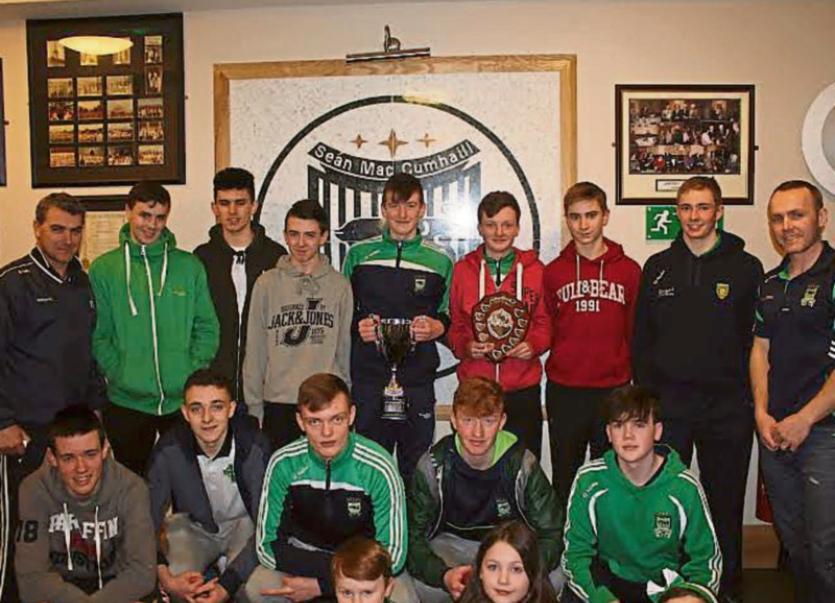 Sean MacCumhaills GAA club held a presentation event on Friday night to award the club's U-16 boys hurlers and footballers their respective medals for the 2015 season.

It proved a very successful year for that age group across the different codes.

The club's Minor Board Chairman, PJ McGowan, addressed the crowd in attendance and thanked them all for their support. He praised the parents and coaches who ensured that the players were able to put in so much time and effort and ensure that all their hard work and determination paid off.

Senior hurling captain, Donegal player and All-Star recipient, Justin McGhee, was on hand to present the hurling medals to the U-16 team which he managed to a League and Championship double success last year.

Justin praised the great bunch of lads and commented on how the standard of hurling has improved in the club since his time lining out for this age grade.

He paid particular notice to the final game of the season. Trailing at half time in the Championship B Final to Letterkenny Gaels by 11 points, the lads rallied and put in one of the best turnarounds, coming back to win out by 9 points in the end.

The U-16 football manager Eamon Griffin said the footballers started their season by winning the group stage unbeaten but losing out on the narrowest of margins in a League Final by a single point.

Not to be deterred, the team came back in a gruelling Northern Board Final against St. Eunans and prevailed after extra time.

In the All-County final it was a rematch of the Northern Board Final but the lads were unlucky to miss out this time around.

The players were presented with their medals by senior football captain and 2015 Player of the Year, Barney Lafferty.

The club would like to thank all those who helped out on the night and here’s to another successful year ahead.