The Dubs are held in MacCumhaill Park 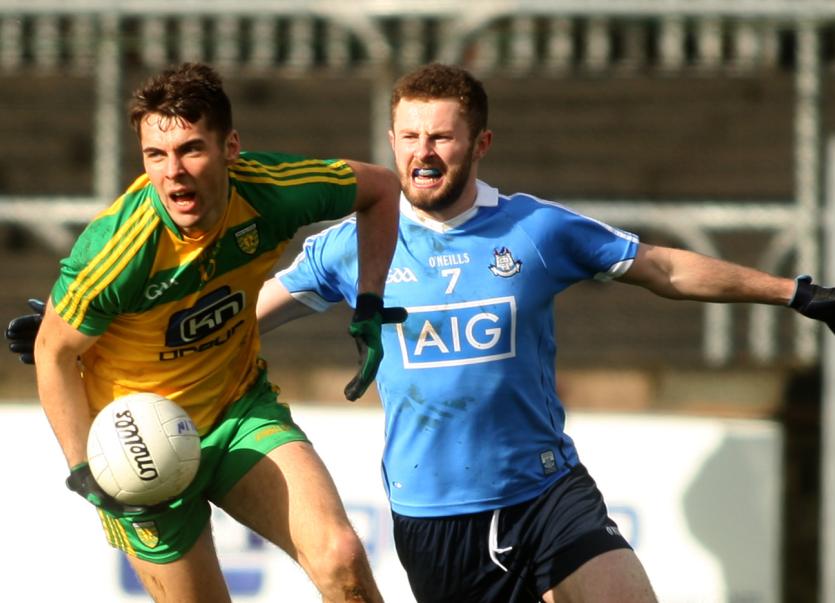 Donegal, the fly in the ointment for Dublin so many times in recent years, came ever so close to bringing an end to Dublin’s long unbeaten run in a thrilling encounter at Sean MacCumhaill Park on Sunday.

In the end, both teams had to settle for a draw on a day when the difficult conditions were a major factor in this Division One clash.

For Donegal, this could well be a vital point going forward. Perhaps more importantly, they will take great confidence from their performance having matched the Dubs with a display oozing with effort and commitment.

The Dubs were the better side for much of the first half but it was Donegal who were in front at half time by 2-2 to 0-5, after they struck two goals within 40 seconds just before the break.

Significantly Donegal managed only three points in the second half, but they were still enough to hold the Dubs to a draw - Donegal drawing level a minute into injury time when Michael Murphy pointed from a free.

Dublin bossed possession for almost the entire first half and despite conceding a point to Jason McGee after 35 seconds, they were well in control.

Shane Carthy drew them level with a well taken point on three minutes and they eventually moved in front on 16 with a converted Dean Rock free.

Donegal defended deep and in numbers and while Dublin were pedestrian in their build-ups, they still carried a real threat in front of goal.

A Ciaran Kilkenny point made it 0-3 to 0-1 by the 20th minute and Conor McHugh followed that up with another point after Eoghan O’Gara created the opening.

Donegal, for all their hard work, were really struggling to create any opportunities coming forward and the absence of the injured Patrick McBrearty certainly had an effect.

By the 25th minute, Dublin had stretched their lead out to four points, 0-5 to 0-1 and given their possession, the All-Ireland champions should have been further ahead. A free from Ciaran Thompson reduced the arrears before the game turned on its head in a period of 35 crazy seconds. Donegal pounced for their first goal when McGee, at the second attempt, squeezed the ball in under Stephen Cluxton.

Then from the kick-out, Cluxton was caught way out from goal and when the ball was fed inside to Ryan McHugh, the Kilcar man showed brilliant awareness to squeeze his ball into the net past a couple of Dublin defenders.

A Michael Murphy free, his first score of the day, eased Donegal into a three point lead early in the second half. However, Dublin quickly regained control in the possession stakes and two frees from Dean Rock was followed by a wonderfully worked goal, finished to the net by  Niall Scully.

Suddenly Dublin were a point in front and Davey Byrne followed it up with a delightful point to leave the visitors 2-4 to 1-8 to the good.

Donegal however, refused to throw in the towel and their hunger and desire were rewarded with two late frees which drew them level, the first converted by the excellent Ciaran Thompson before Murphy’s injury time equaliser.