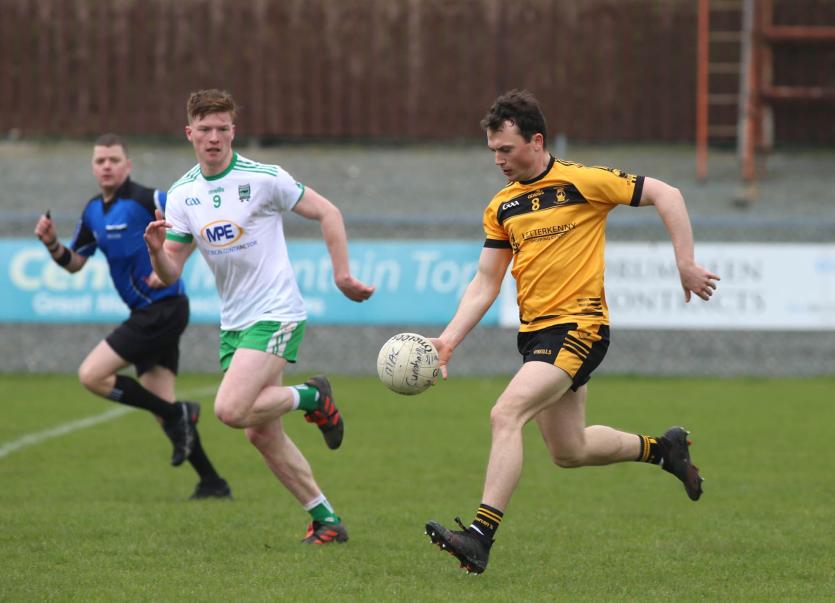 Conor Gibbons posted eleven points and Caolan Ward hit two goals as St Eunans got the new season up and running with a seven point win over Sean MacCumhaills, in O’Donnell Park.

Oisin Gallen and Aaron Kelly hit the goals for Sean MacCumhaills on their first game back in Division One, in 14 seasons.

St Eunan’s played with the wind in the first half and thanks to Ward’s two  goals and seven points from Gibbons, the locals were six ahead at half-time.

Ward rattled the back of Eoin Patton’s rigging on eight minutes after Conor Gibbons raced on to a short MacCumhaills kickout.

This was in response to a well taken Oisin Gallen three pointer at the other end minutes early as the new boys to the top flight got off to a bright start.

Gallen  was 35 metres out and  still had some work when picked out by Wilson. But he kept his nerves as he slotted under the advancing Blake Forkan, in the Eunan’s goal.

Forkan was preferred between the posts ahead of county keeper Shaun Patton,

The  goal edged the Finnsider’s one ahead  1-0 to 0-2 with five minutes on the clock.  Conor O’Donnell and Gibbons had opened the scoring  for the black and ambers.

The MacCumhaills lead just lasted a mere three minutes with Ward revelling in his centre forward role restoring  the locals advantage with just over eight minutes on the clock.

And with the on fire Gibbons and Conor O'Donnell finding the  target, St Eunans years of Division One experience was becoming more evident as the game wore on.

They are playing at a pace above MacCumhaills.  The men from MacCumhaill Park were slower in the build up and taking more time on the ball.though Oisin Gallen did look threatening any time MacCumhaills got forward

This was despite the best efforts of a player of the quality of Conor Parke.

Ward’s second goal after a good patient build up and cross from Eoin McGeehin, on the quarter hour mark opened up a six point advantage for Eunans.

And while Stephen Mulligan and Darren O’Leary kept MacCumhaills in touch from placed balls St Eunan’s still had a six point half-time cushion as they led 2-9 to 1-5 at the interval.

Bernard McGeehan rjigged his team at half-time and moved Marty O’Reilly who had very quiet first half at centre half back, to centre forward.

MacCumhaills opened with two quick points from O’Reilly and Mulligan before Gibbons and company clicked into gear again.

Gibbons and Rory Carr and O’Leary and Oisin Gallen traded point before Conor O’Donnell and Gibbons extended the St Eunans lead out to eight points with under ten minutes left on the clock.