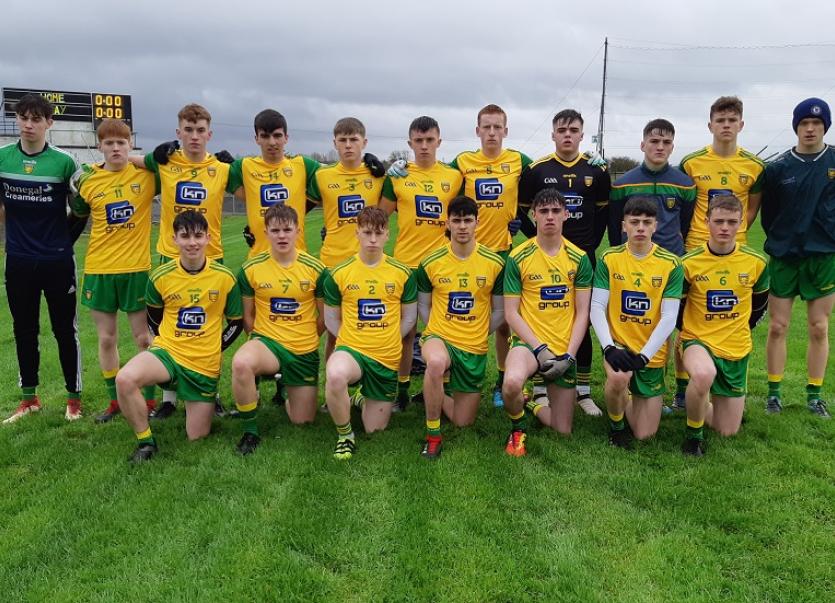 The Donegal U-17s pictured before their game with Fermanagh

Donegal Minors are chasing a place in the Ulster semi-final when they go toe-to-toe with Cavan on Sunday in Kingspan Breffni Park. (Throw-in 6pm)
The Gary Duffy-managed Donegal got their championship back on track on Saturday evening with a six-point win over Armagh.
Following their first round defeat by Tyrone in Ballybofey, Donegal bounced back with an impressive victory over Armagh, also in Ballybofey.
Super sub Shane Monaghan scored two goals in the second half as Donegal came from four points down in the second period to run out comfortable winners at the finish.
Corner forward Johnny McGroddy kicked nine points and set up Monaghan for Donegal’s first goal in a man of the match performance. Senan Rooney, until he picked up an injury in the second half, Eoin Dowling and Kealan Dunleavy, in the middle of the field, Jack Gallagher, at centre- halfback and Carlos O’Reilly and Eric Carr in attack, all turned in big performances for the home side.
The win over Armagh was a good recovery from the opening day four-point defeat at the hands of Tyrone. Tyrone are now also going through the Qualifiers after losing to Monaghan last Saturday.
“It was a good win and good to get over the line against a very physical Armagh side and it is good to be back in the championship,” Gary Duffy said.
“But Cavan are a new challenge. They have a number of very good players. Caoimin McGovern in the middle of the field is a very good player and Daryl McGurrren at full-forward is a quality forward and will take watching.”

Stand-out
McGovern and McGurren were the stand-out players when Donegal and Cavan met back at the beginning of last month. McGurren hit four points and McGovern three in their total of 0-8 in that game.
Donegal won that match 3-18 to 0-8 which was something of a flattering winning margin for Donegal who hit three goals in the last quarter. Eoin Martin scored the first of the goals on 45 minutes. The sides were locked on 0-6 at that stage while Matthew Coyle and Shane Monaghan posted the other two goals late in the game.
“That game is gone,” Duffy insisted.
“This is a new game and Cavan are at home and they will present with a different challenge this time around.”
Senan Rooney, the Donegal playmaker at centre half-forward, picked up an injury in the second half against Armagh and is rated extremely doubtful for Sunday evening’s game.
“He has a hamstring strain and is extremely doubtful. The medical team are assessing the injury and we will know more later in the week. But at this stage I would rate his chances of no better than 50/50,” Duffy said.

Injury
Darren Maguire, who missed the Armagh game with an ankle injury, is also a doubt but otherwise Gary Duffy has reported no further injury worries.
Paul O’Hare replaced Rooney and kicked a point and slotted in well to the attack and is one option to replace the Aodh Ruadh clubman should he not be fit to take his place.
Shane Monaghan is another option. And Eoin Martin who saw no action against Armagh, but impressed any time he was introduced in the course of the minor league, is another player who could come in.
Donegal trained on Tuesday night and are due to train again tonight (Thursday).
The winners of Sunday evening’s game will advance to meet Monaghan in the Ulster semi-final. In the other semi-final, Derry await the winners of Tyrone and Down who also meet on Sunday.