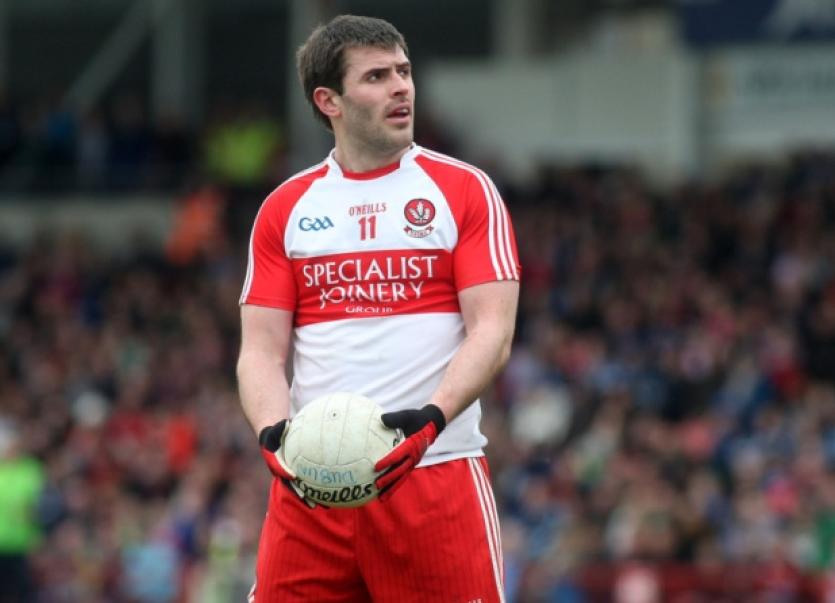 Derry captain Mark Lynch and his team may have enjoyed a good National League campaign that took them all the way to the final and a Croke Park showdown.

Derry captain Mark Lynch and his team may have enjoyed a good National League campaign that took them all the way to the final and a Croke Park showdown.

But for the Oak Leaf skipper and his team mates, it was always about Donegal in the championship on May 25th, in Celtic Park. That was the way it has been ever since the draw was made last October.

Not even a 15 point league final trimming by All-Ireland champions Dublin in the Division One league final, altered Lynch’s focus or his team’s focus.

“Our focus always has been on Donegal and the 25th of May in Celtic Park. We were disappointed with the league final performance and result. But on the Tuesday night after the final we had already put that game behind us, and we were back training and looking forward to Donegal,” said Lynch.

“Of all the games we have played all year, the league final was the game we probably learned the most about ourselves. But the reality, too, until the 25th and Donegal we won’t know whether that is the case or not.”

Lynch, who was last month named the Opel GAA Footballer for April, for his performances in the league, sees the Donegal challenge right up there next to that of the one presented by Dublin.

“It goes without saying that Donegal are a seriously experienced winning team and that presents a huge challenge on its own for us.

“That it is something we will have to match on the day. At this stage it is all about having the belief that we can match them because they will come to Celtic Park with the belief that they can beat us.

“If we don’t play to our potential we will be in trouble because one thing’s for sure Donegal will certainly play to their potential.”

Like his manager Brian McIver, the Derry skipper is not reading too much into Donegal’s defeat by Monaghan in the Division Two league final on the same day they were taken back down to earth by the Dubs.

“I don’t think they will look back on their final defeat to Monaghan, the same way as we will look back on our defeat by Dublin. They are too experienced for that and besides I think their focus was already on the Celtic Park game when they played Monaghan.

“They were only back from a training camp and they had already clinched promotion which I’m sure was their main objective at the start of the year.

“They will be a different prospect in the championship and we are just going to have to go out and match them and play out of our skin if we are to be in with a chance of winning. It is all about belief at this stage and after the league I suppose we feel that on our day we are more than a match for any team, especially in Celtic Park.

“Celtic Park has been good for us all year and hopefully it will be again on Sunday.”