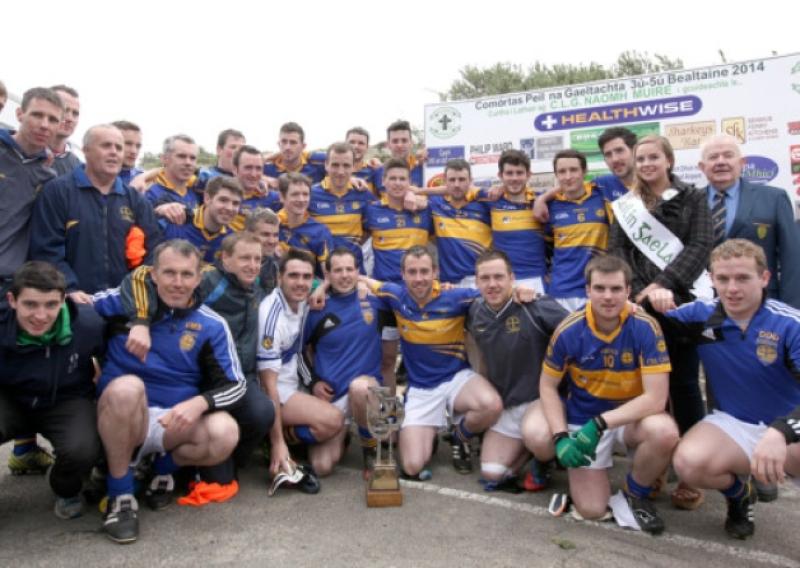 Kilcar bridged a six year gap when crowned Donegal Gaeltacht champions after victory over Glenswilly at the Banks, Mullachderg on Monday.

Kilcar bridged a six year gap when crowned Donegal Gaeltacht champions after victory over Glenswilly at the Banks, Mullachderg on Monday.

In a game spoiled by a strong wind it took an opportunist goal from corner forward Glen McBrearty to see the men from the South West claim a first title in six years against their great modern day rivals.

With the game on a knife edge and the teams level for only the second time, McBrearty pounced when Glenswilly goalkeeper Philip O’Donnell got caught in two minds and his pass accross his own goals was palmed into the empty by the corner-forward from three yards.

That was on 53 minutes and with just one more point from Ryan McHugh, in the closing ten minutes, the goal proved to be the title clinching score.

Once again the McHugh brothers, Mark and Ryan and their cousin Eoin (McHugh), left their imprint on the game while Patrick McBrearty, without hitting any high notes, scored three points,,all from frees and also provided the link for a couple of others.

Mark McHugh started at midfield in direct opposition to his former county colleague Neil Gallagher, before reverting back to a sweeping role in front of his full-back, on the introduction of Michael Murphy early in the second period.

Ryan McHugh prodded and probed from wing-back in a man-of-the-match performance, while time after time Eoin’s searing pace from centre half-back had the Glenswilly rearguard at sixes and sevens, especially in the second half into the wind.

It was one of those forays that revived the champions challenge after Glenswilly, through Michael Murphy, Gary McFadden (2) and Neil Gallagher posted four points without relpy to wipe out Kilcar’s half-time advantage.

McHugh picked up possession in his own half before taking off and skipping past a number of defenders before finding Patick McBrearty, who swiftly off-loaded to Ashley Carr, to restore Kilcar’s advantage, 0-8 to 0-7, with less than a quarter of an hour remaining.

This was far from a four man show. Barry McGinley and Patrick Gallagher, in defence; Ciaran McGinley and Ashley Carr all had their moments for what looked the better balanced and cohesive outfit.

It was the individual displays of Eamon Ward, Ruairi Crawford, Neil Gallagher and Gary McFadden and Michael Murphy, when introduced early in the second period that had Glenswilly still in the tie right up to the closing minutes.

Kilcar led by four points, 0-5 to 0-1, at half-time, a margin which scarcely looked adequate given they had they played with the strong wind in their backs the opening 30 minutes.

Ryan McHugh - with the game’s opening score; Aodhan McGinley, Eoin McHugh, Patrick McBrearty and Mark McHugh scored the Kilcar. Dermot McGinley, on five minutes, raised Glenswilly’s only first period flag. Kilcar were still four in front, 0-7 to 0-3, nine minutes into the second half but with the introduction of Michael Murphy and Gary ‘Copper’ McFadden shortly after the resumption, all of a sudden Glenswilly had a different edge to them.

McFadden, Oisin Crawford, Neil Gallagher and McFadden again pointed to tie up the contest for the first time since the fifth minute.

Ashley Carr, prompted by Eoin McHugh’s run, edged Kilcar back in front. But the lead was shortlived when two minutes later McFadden landed his third to lock the sides on 0-8 each to set up the grandstand finish.

With boths defences packed and chances limited McBrearty’s goal was the deciding and clinching strike.