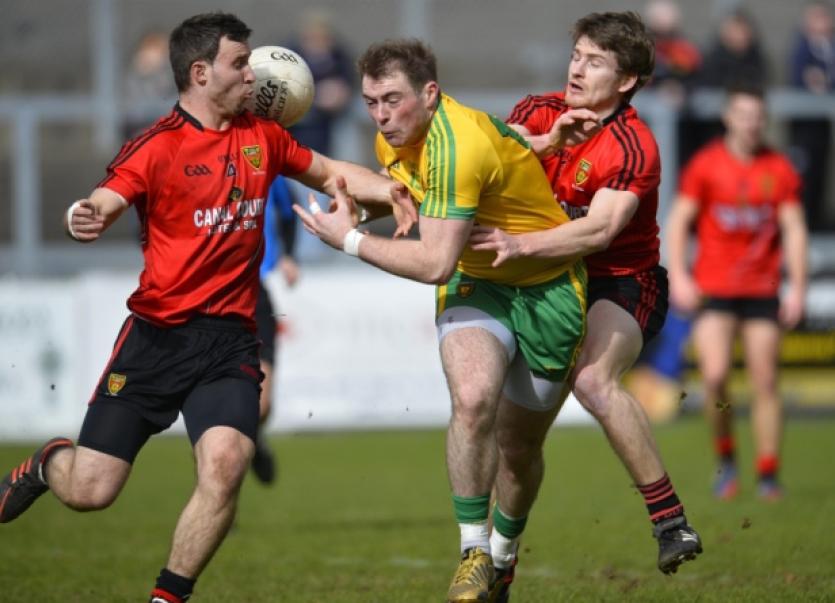 Donegal manager Jim McGuinness will not finalise his team for Sunday’s National Football League meeting with Louth until later this week.

Donegal manager Jim McGuinness will not finalise his team for Sunday’s National Football League meeting with Louth until later this week.

“Frank was complaining of a tightness of his hamstring at training on Tuesday night. ‘Brick’ went over on his ankle against Down and we are monitoring him at the moment,” said the Donegal boss, who went on to explain that Neil Gallagher also felt a tightness of his groin after Glenswilly’s league game on Sunday last.

Meanwhile, Darach O’Connor is still receiving treatment on the hamstring injury he picked up in the warm up before Colaistí Inis Eoghain’s McLarnon final meeting with St Eunan’s on Monday week last. Panel member Leon Thompson is also receiving treatment for a groin injury.

“None of them are too serious and I am hopeful that they will all be fit. But it is a case of keeping an eye on them over the next few days before making a final call. The one thing we do not want to do is risk them and maybe end up with a worse injury,” the Donegal boss told the Democrat last night.

“We have a busy couple of weeks with two games in two weeks and we are only eight weeks away from the championship game against Derry. So the last thing we want is someone aggravating an injury and as a result, being out more long term. It is a matter of managing the situation as best we can.”

Donegal go into Sunday’s game on top of the Division Two table, level on points with Monaghan and Down, but ahead of both on score average.

Louth, on the other hand, are on two points and are propping up the league table.

Their points were picked up at home first day out courtesy of a 0-16 to 1-13 draw with Armagh. And in their last game they shared the points with Galway, 2-9 each, after letting a seven point lead slip early in the second half.

In their five games to date they have scored 2-57. In all, they have conceded 11-60 in the five games. Meath at home in Drogheda is their last game.

After a two week break Jim McGuinness is confident that Donegal will return refreshed and ready to round off their league campaign on a winning note.

“We worked hard during the two week break and are looking forward to getting back into action. But we are expecting a tough challenge from Louth. They are fighting for survival and have stated they are looking for three points from their last two games.

“It is important that we match them for intensity and win the game and put ourselves in the frame for promotion.

“It is only eight weeks to the championship and our game with Derry and we have two games to play and hopefully a third - a league final - which will bring us in nicely to the Derry game.”

Donegal lost 0-10 to 1-9 to Down last time out in a game they kicked 12 wides in total and had numerous other chances.

“We had 28 shots on goal against Down the last day and only scored ten points. So obviously this was something we have worked on in training over the last two weeks and I expect us to be much sharper in front of the posts on Sunday.”

McGuinness confirmed that U-21 players Patrick McBrearty, Ryan McHugh, Marty O’Reilly, Hugh McFadden and Darach O’Connor are in the squad for Sunday.

However, he did state that he planned to use them as sparingly as possible, in light of their Ulster semi-final meeting with either Armagh or Antrim on Wednesday night next.

He admitted, though, that with three of his forwards on the doubtful list, he may be forced to start U-21 captain Patrick McBrearty on Sunday.