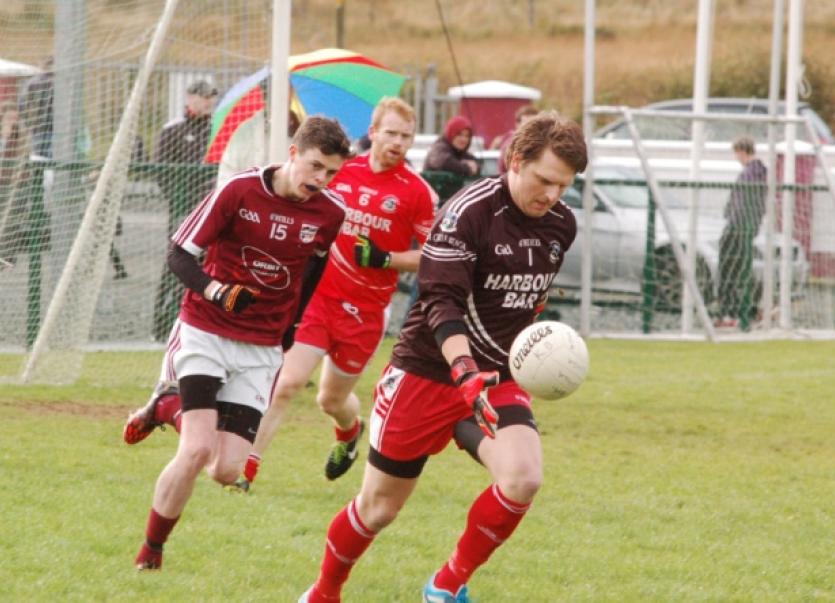 It ended all square at the Burn Road on Sunday afternoon after Termon rallied with three late points to force a draw against Killybegs who led for the entire game until Christy Conaghan slotted over the equaliser in the third minute of injury time.

It ended all square at the Burn Road on Sunday afternoon after Termon rallied with three late points to force a draw against Killybegs who led for the entire game until Christy Conaghan slotted over the equaliser in the third minute of injury time.

The result leaves Termon with just a point going into the final group game against Gaoth Dobhair. Killybegs have two points as they prepare to take on Dungloe.

Termon will rue their failure to take three goal chances in the opening ten minutes playing with the breeze. Killybegs keeper Anthony O’Hara made a fine save from Daire McDaid’s 4th minute penalty after Dominick McFadden was fouled by Jason Noctor.

Aidan Sweeney should have found the net after being setup by McDaid and it was similar story for midfielder Jimmy Gallagher who burst through the defence but just lost control of the ball at the vital moment. Benny Boyle and Brendan Maguire from play had the visitors 0-2 up in a very physical opening period where tempers boiled over a couple of times.

A Boyle free extended that advantage before the hosts finally opened their account in the 20th minute courtesy of a Daire McDaid free. However, Killybegs finished the half strongly with another Boyle free and the game’s only goal. Termon keeper Michael Boyle came for a high ball floated in by Mark Boyle but under pressure from Paul Cunningham the ball ended up in the back of the net.

1-4 to 0-1 down Termon’s start to the second half wasn’t helped by Jimmy Gallagher’s black card for a high tackle. But, Daire McDaid was on the mark from a free. The same player was involved in the most crucial talking point of the game from a Termon perspective when his 44th effort for a point was disallowed by ref Hugo Wallace following consultation with a linesman.

Mark Boyle had a great chance to extend the Killybegs lead again to six points but the veteran attacker blazed wide from close range. Daireann Gibson’s men finally found the shooting range in the closing 14 minutes. A Johnny McCafferty effort bounced over the bar and Christy Conaghan also converted from play to leave two points between the sides.

Killybegs only score of the second half came with two minutes of normal time remaining from a Charles Tully free to put a goal between the sides again. Back came the Burn Road men with two Daire McDaid frees before Conaghan slotted over the equalizer in the 63rd minute. Seconds later Conaghan had another attempt blocked down before referee Wallace blew the final whistle.