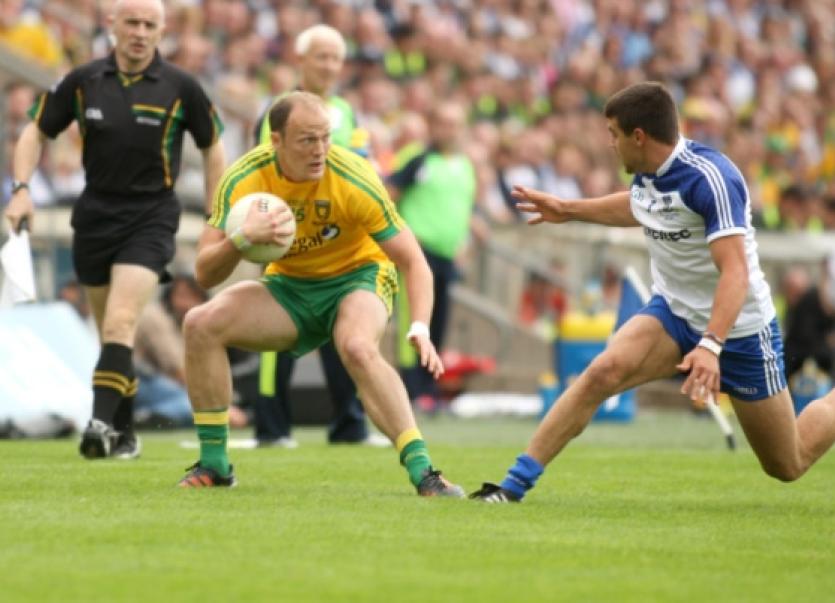 A much more physically powerful St Michael’s brushed aside the tepid challenge of Kilcar, with an ease that was both surprising and shocking.

A much more physically powerful St Michael’s brushed aside the tepid challenge of Kilcar, with an ease that was both surprising and shocking.

A chilly sea breeze that would cut corn made good football almost impossible.

But this has to be one of the most bizarre games ever witnessed in the spiritual home of Donegal GAA in Towney.

Kilcar have traditionally been the masters of the short passing but attacking game, but yesterday they were the masters of a form of handball/keep ball in a surreal first half where neither side wanted to attack.

St Michael’s had the strong breeze and chose to sit back and it looked like a risky gamble as they only led by 0-2 to 0-0 with just two minutes to half-time.

It looked like Kilcar’s tactic of keeping possession between the two 45s and then retreating whenever St Michael’s seldom ventured forward would pay rich dividends.

So we were treated to the strange spectacle of two teams that were content to sit back and look at each other.

But then St Michael’s hit two quick-fire scores in the 29th and 30th minutes from the boot of the highly impressive Colm McFadden and outstanding substitute Daniel McLaughlin to put them ahead by 0-4 to 0-0 at the interval.

Kilcar’s strange tactics seemed to be working, but they were simply overwhelmed by a rejuvenated St Michael’s side that upped the tempo considerably in the third quarter.

McElhinney set the tone for the rest of the match when he strode through the centre of the Kilcar defence and suddenly St Michael’s were ahead by 0-5 to 0-0.

And it was McElhinney who was at the centre of a killer goal, which effectively sent Kilcar packing in the 40th minute.

Unable to contain the powerful strong running and much stronger St Michael’s a couple of Kilcar defenders took McElhinney down in the square.

And up stepped ice cool Colm McFadden to slot home the penalty with aplomb into the breeze.

It took the losers a whopping 45 minutes to get their first score that came from the unfortunate Patrick McBrearty’s 45 and they also could only manage two points from play in the entire 60 minutes.

For Kilcar did not expend too much energy in the opening half but they were totally dominated as St Michael’s cleverly used their big men to block up the middle and set up a wave of attacks.

And the losers’ defence was as wide open as Bundoran on a 12th Weekend when St Michael’s substitute Daniel McLaughlin took a clever pass from McFadden and steered the ball over the head of Kilcar ‘keeper Kevin Campbell.

McLaughlin’s cool finish had St Michael’s in front by 2-6 to 0-2 ten minutes from time.

McBrearty suffered an early arm injury which saw him go off and on a few times, and his absence seemed to affect his young colleagues.

The McHugh clan tried hard to bring Kilcar back into the picture but St Michael’s won at a canter and must now be looking forward to a tilt with arch rivals Glenswilly next weekend.

Modest St Michael’s manager Tony Wilkinson said his side were “lucky” and got the breaks at the right time.

He saluted his charges effort and ability to hit back when it mattered. And on this showing they look to be a match for anyone in the county. But this is one match in Towney that Kilcar will be hoping to forget.