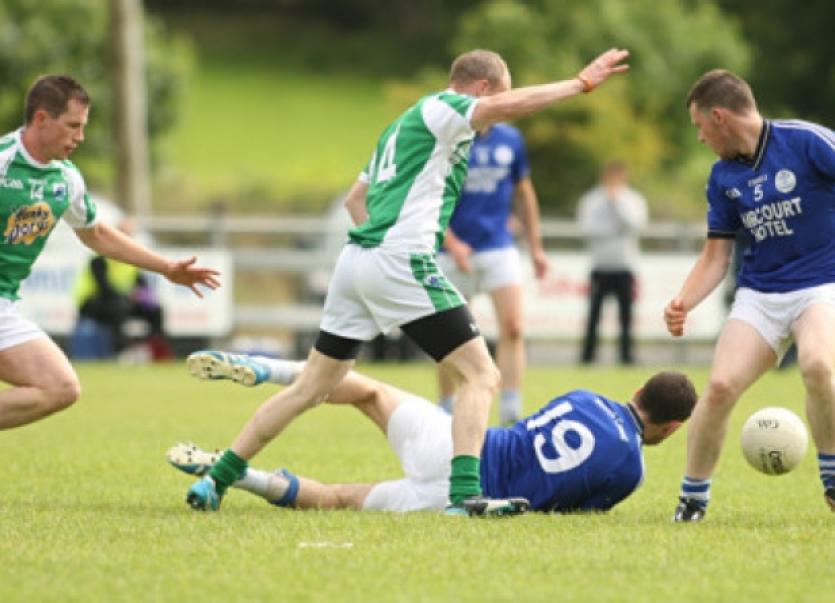 McDyer was one of the experienced men in the Naomh Conaill line-up in the absence of their county men - Leo McLoone, Anthony Thompson, Dermot ‘Brick’ Molloy and Leon Thompson.

And he drew on that experience deep in injury time as he kicked the winning point after a Kevin Cassidy palmed goal on the stroke of normal time had tied up the game at 1-11 each.

McDyer, who was the game’s top scorer with 1-5, held his nerve under pressure three minutes into added time when picked out with pin point accuracy by John O’Malley, to split the Goath Dobhair posts for the winning score.

Gaoth Dobhair were minus the McGee brothers, Neil and Eamon and Odhran MacNiallais and all of their county minor contingent with the exception of Gavin McBride.

But despite the absence of the marquee players on both sides this was a highly entertaining game and for the most part and evenly contested encounter.

While McDyer and John O’Malley, who hit 0-4, did the most of the damage up front for the locals, Mark Gallagher at centre-half- forward, Cathal Ellis - in the less familiar surroundings of wing forward - Hugh Gallagher and James Doherty also all turned in top class performers for the men in blue and white.

Kevin Cassidy ended the game with a personal tally of 1-3 from centre half-forward and along with Noel Kelly, in the number 14 shirt, and Gavin McBride at corner-forward, asked the most questions of the home defence.

Gaoth Dobhair had big performances, too, from Gary McFadden, Paul Mulligan, Joe Duffy and Sean Boyle in defence while Danny Curran played well in his first outing of the season when introduced to the middle of the field early in the second half.

And while his side were pipped at the post, Gaoth Dobhair manager Kevin Cassidy will have been pleased with the outing and he has much to take from the game too.

In all Gaoth Dobhair had eight different scorers with five of the six forwards getting their names on the score sheet as well as two of his half-backs.

Ironically both teams played their best football into the stiff breeze with Naomh Conaill leading 1-5 to 0-7 at half-time having faced the wind in the opening period.

McDyer got the locals off to a dream start when his well struck penalty beat Christopher Sweeney on three minutes. Eunan Doherty was fouled for the spot kick as he bore on Sweeney’s post. McDyer and O’Malley extended the lead out to 1-3 to 0-0 before Cassidy opened the Gaoth Dobhair account on 14 minutes.

And while Tomas Diver, Gavin McBride, Paul Mulligan, Cassidy and Noel Kelly added further points, the locals were still in front at the break courtesy of strikes from A J Gallagher, Mark Gallagher and O’Malley.

Gaoth Dobhair kicked the opening four points of the second half to pull two clear by the 40 minute mark. And with McDyer and Cassidy trading points, the visitors were two up, 0-11 to 1-6, going into the final quarter.

But points from McDyer (3), O’Malley and Darragh Gallagher without response saw the locals go three up again 1-11 to 0-11, before Cassidy’s palmed goal from a Noel Kelly cross tied up the game to set up a spine tingling closing three minutes.