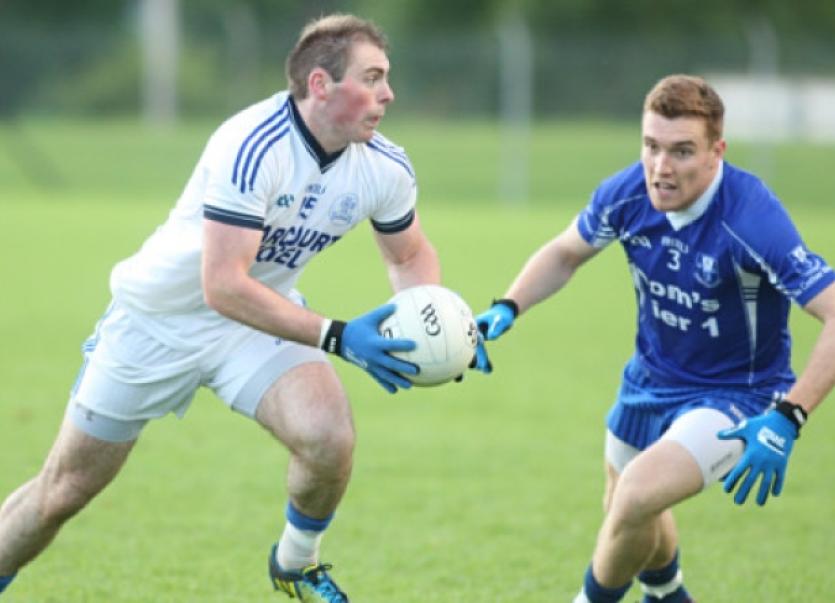 Alan Foley at Davy B

With both Naomh Conaill and St Eunan’s having already qualified for the last eight of the RTÉ Raidió na Gaeltachta SFC there was a lack of edge in Glenties on Sunday.

With both Naomh Conaill and St Eunan’s having already qualified for the last eight of the RTÉ Raidió na Gaeltachta SFC there was a lack of edge in Glenties on Sunday.

In the end it was the side managed by Paddy Campbell who topped Group 1 against a vastly understrength St Eunan’s side who were missing the likes of Rory Kavanagh, Conall Dunne and Kevin Rafferty. Conor Gibbons, Rory Carr and Conor Morrison, who have all made an impact this season, were also left out of the starting XV.

Naomh Conaill started with all but one of the side who had defeated Malin eight days’ beforehand with Eoin Waide coming in for John O’Malley. Campbell did, though, make use of his bench in the second half.

The two sides have both enjoyed and endured some frenetic clashes over the last decade or so but this certainly wasn’t one of them. There was a challenge match feel, particularly in the first half, which was dominated by the home team.

By the break they had established a 0-6 to 0-1 lead with Dermot Molloy and Dara Gallagher scoring twice apiece and Brendan McDyer and Johnny McLoone also finding their range.

For St Eunan’s, it took 22 minutes for so much as a shot at goal, which Stephen McGrath gathered when David Tyrell’s effort fell short. Michael Miller then opened the Letterkenny side’s account.

St Eunan’s improved in the second period as Naomh Conaill began to ring the changes.

Donnacha Gallagher’s free at one end was cancelled out by Molloy on 33 minutes before Maxi Curran’s team enjoyed a more fruitful spell.

Donnacha Gallagher, Paddy McGowan and Miller popped over three successive points to leave their arrears at 0-7 to 0-5.

The closest either side came to a goal all afternoon was when Sean Daffan made a fine follow-up save to deny Marty Boyle after the St Eunan’s goalkeeper had initially failed to get a firm hold on a free from Molloy hadn’t the legs to get over the crossbar.

A draw, as a consequence of their much superior scoring difference, which was +24 to Naomh Conaill’s +5 going into the match, would’ve suited St Eunan’s.

However, Molloy’s fourth point of the afternoon gave Naomh Conaill some wriggle-room.

And although St Eunan’s, who were concluding with some emphasis, knocked over points from Conor Parke and Eamonn Doherty to leave themselves just a point down, O’Malley’s free in injury time sealed a home win.