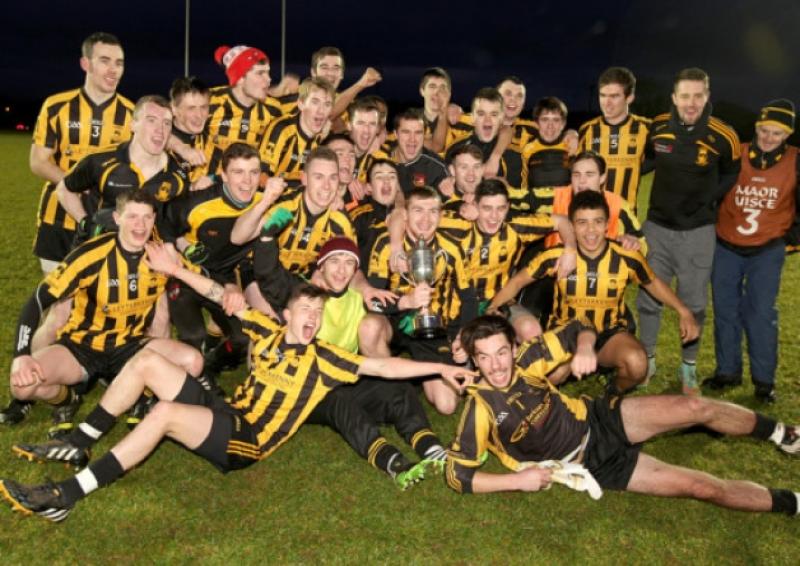 With the last play of the game St. Eunan’s took home the U-21 championship thanks to the drive of Conor Parke and a cool finish from Sean Hume.

With the last play of the game St. Eunan’s took home the U-21 championship thanks to the drive of Conor Parke and a cool finish from Sean Hume.

The reigning champions, Kilcar, looked to be on their way when they led by seven points midway through the second half, but this was a victory for persistence as St. Eunan’s clung on and then struck for a dramatic winning goal deep in added time.

With the sides level, the excellent Rory Carr was involved, finding Conor Parke on a forward surge and he got the ball across the goal for Hume to palm home the winning score

Kilcar will wonder how they lost this game and Eoin McHugh and Patrick McBrearty - the two best players on the field - did not deserve to be on the losing side.

But games are won by teams who play to the final whistle and St. Eunan’s did this in style. The Kilcar full-back line was always going to be tested and in hindsight they would have needed to provide extra cover.

St. Eunan’s were much better at providing that defensive cover but despite that they found Patrick McBrearty and Eoin McHugh quite a handful at times.

In a very entertaining opening half, Kilcar led at half-time by 1-9 to 1-6, thanks in the main to the accuracy of the McBreartys and a cracking goal from Eoin McHugh.

Stephen McBrearty (free) and Lee McMonagle with a magnificent effort, traded points inside the opening two minutes before Sean Hume edged St. Eunan’s in front from a free.

Kilcar hit back with Patrick McBrearty hitting two and Stephen notching another free after Eoin McHugh was fouled.

They were rocked, however, on 14 minutes when a Patrick McBrearty free dropped short and St. Eunan’s broke quickly for Rory Carr to cross and Darragh Mulgrew was on hand to palm to the net from very close range.

Sean Hume added a point to leave Eunan’s 1-3 to 0-4 ahead on 17 minutes. Patrick McBrearty and Hume (45) traded scores before Eoin McHugh lit up the game with a classic goal. He took a pass from Stephen McBrearty and broke in along the endline to blast to the roof of the net and a 1-5 to 1-4 lead.

Ryan McHugh with the outside of his left added a point while Sean Hume hit a free at the other end to leave it 1-6 to 1-5 with seven minutes left in the half.

Ryan McHugh had a great goal chance but blazed across the goal but Kilcar finished well with Patrick McBrearty hitting two long range frees and Stephen notching one from play before Jordan McBride had the final point of the half two minutes into added time.

It looked curtains for St. Eunan’s when Kilcar added four points without reply in the opening 13 minutes of the second half, Eoin McHugh hitting the first two with beautiful strikes while McBrearty added two frees.

There were 14 minutes on the clock before St. Eunan’s got on the board, a long Darragh Mulgrew effort for a point dropping short and Kilcar ‘keeper Kevin Boyle didn’t hold. Rory Carr was in quickly and his effort went just over.

It was the start of the St. Eunan’s comeback and three further points followed before the 52nd minute with Sean Hume (free), Rory Carr and Lee McMonagle finding the range.

The Letterkenny side were beginning to make inroads and they were helped when Kevin Boyle’s kick-out was intercepted and he found Sean Hume to fire home the equalising goal from close range.

After another great run from Eoin McHugh, Patrick McBrearty was denied a goal by the boot of Sean Daffan. From the ‘45’ Ryan McHugh edged Kilcar back in front on 55 minutes, but two minutes later Michael Miller levelled once more.

Kilcar won a disputed free for Stephen McBrearty to edge them ahead again on 28 minutes but with normal time up, Rory Carr was fouled for Hume to level matters.

Then in added time came the dramatic finish. Kilcar had a chance to go ahead but Patrick McBrearty’s free from just outside the ‘45’ drifted to the left of the posts and St. Eunan’s in the final attack produced the match-winning score, thanks the ball winning ability of Rory Carr and the drive and desire of Parke to get forward from full-back to provide the match winning pass.

It was a smash and grab raid and St. Eunan’s can thank Conor Parke, Conor Morrison, Darragh Mulgrew, Lee McMonagle and especially Sean Hume and Rory Carr for the victory.

Footnotes: A wonderful game on an excellent pitch. Pity there wasn’t a match programme for this final, especially with such a good attendance. Even a 4-page handout would have sufficed.

Secondly, this new plague of kicking the ‘keeper’s tee away raised its head again, with Kilcar the guilty party. Whether it just an individual or being coached, it needs to be erased as it has the potential to cause a melee. A black card is the minimum penalty it deserves.