Naomh Conaill get back on track against Dungloe 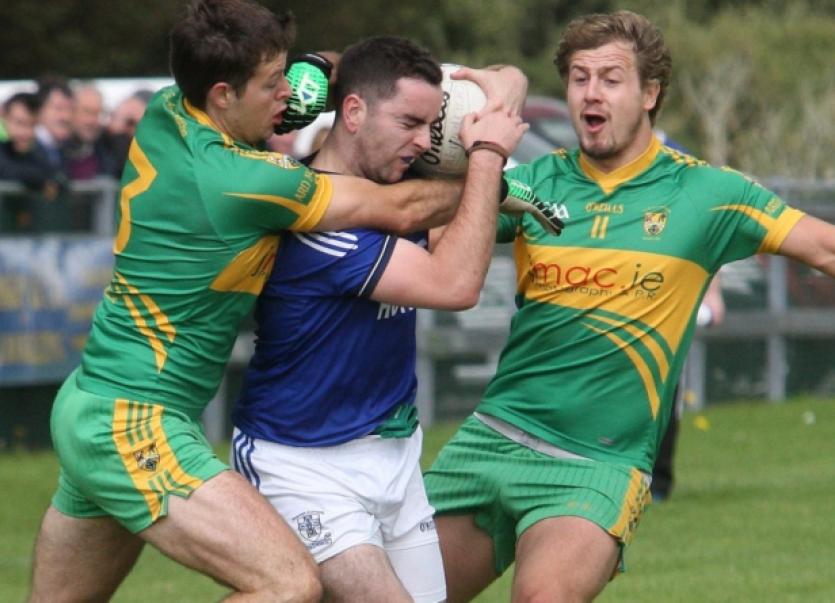 After successive defeats to Gaoth Dobhair (away) and Kilcar (at home) this was the perfect response from Naomh Conaill and Dungloe proved the perfect test for the men in blue and white.

The final screline for the winners 2-17, from ten different scorers on the night, will have pleased manager Martin Regan (junior) with Darragh Gallagher, who seems to have found a new lease of life since moving to the half-forward line, notching up 1-4.

All but one of the centre half-forward’s tally came from play and it was Gallagher and former county man Dermot ‘Brick’ Molloy (0-3), John O’Malley (1-1), and Leo Thompson (0-2) that inflicted the most pain on Tony Boyle’s youthful side.

It will also please the Naomh Conaill boss that Dungloe asked some serious questions and were still in the tie, just two points adrift, with ten minutes remaining.

Despite playing with the advantage of a stiff breeze, Naomh Conaill chased the game for much of the first half after Dungloe got off to a lightening start with a goal and point inside six minutes. Eoin Scally poked home the goal after Noel McBride challenged Stephen McGrath for a high ball.

Naomh Conaill clawed their way back into the game and led by two points, 1-7 to 1-5 ,at half time. Dermot Molloy fisted the goal on the stroke of half-time.

The introduction of the London-based Adrian Hanlon gave Dungloe new impetus on the resumption and when Conor Greene netted for Dungloe’s second goal, eight minutes into the new half, the Rosses side were back in front, 2-6 to 1-8.

Dungloe did stay in touch and were still only two adrift with ten minutes on the clock. But the locals found another gear in the closing ten minutes and hit six unanswered points, to get their league ambitions back on track.

The loss of the experienced trio of Raymond Sweeney, Noel McBride and Shaun Sharkey finally caught up with a game Dungloe.