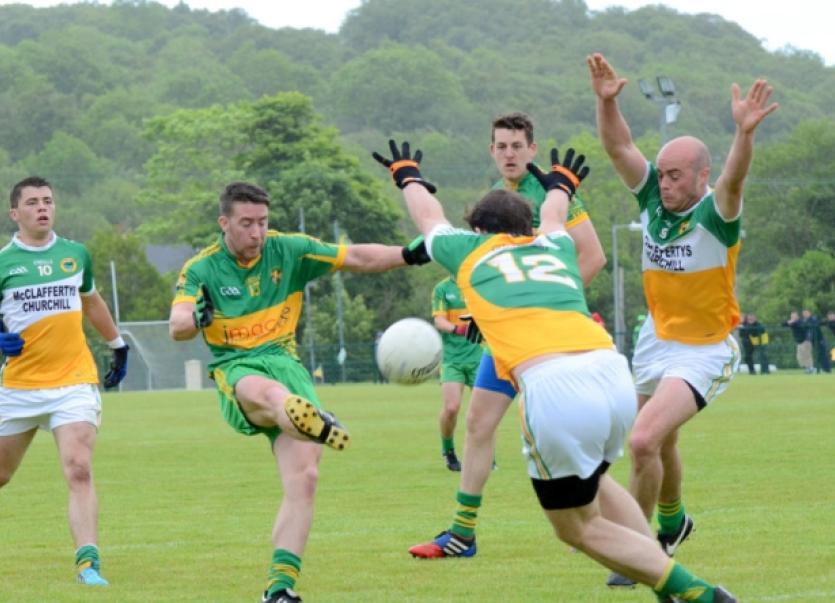 Ardara still have plenty of work to do to work their way out of relegation trouble but Sunday’s result was a good one in Glenswilly.

Ardara still have plenty of work to do to work their way out of relegation trouble but Sunday’s result was a good one in Glenswilly.

The side from Pearse Park had only picked up two points thus far this season in the All-county Football League Division One but seven points from Tomás Boyle earned the win at Glenswilly.

Ardara had the wind in the first half and were in a decent position, 0-6 to 1-0 up at half-time. Boyle scored all but one of that total, with Michael Maloney the other point scorer.

At the other end, Glenswilly weren’t having much success in front of the posts but their hopes were boosted when Christopher McMonagle pickpocketed Ardara goalkeeper Declan Gallagher, slapping a 10th minute goal.

With the changing of ends, Glenswilly would’ve privately fancied themselves to wear down their arrears but Ardara were still offensively dangerous.

This came after both Conor Classon and CJ Molloy were black-carded in the first half.

After the break, Kieran Breslin scored two points and Gareth Concarr also got his name on the scoresheet.

Glenswilly only played in fits and starts and although minus the talismanic presence of Neil Gallagher and Michael Murphy after their exploits in the county colours on Saturday, were still a little flat.

Ciaran Bonner and Coalan Kelly kicked two decent scores at the start of part two but those failed to ignite the Glenswilly fuse.

Michael Canning threw goalkeeper Philip O’Donnell in at full-forward from the bench but again, the hosts weren’t prolific enough to claw their way back in.

Kelly, Gary McFadden, Brian Farrelly and Paul O’Brien all hit points in the closing stages but John McConnell’s Ardara made most of their travels to post an encouraging win on the road