The greatest ever day for Donegal GAA! 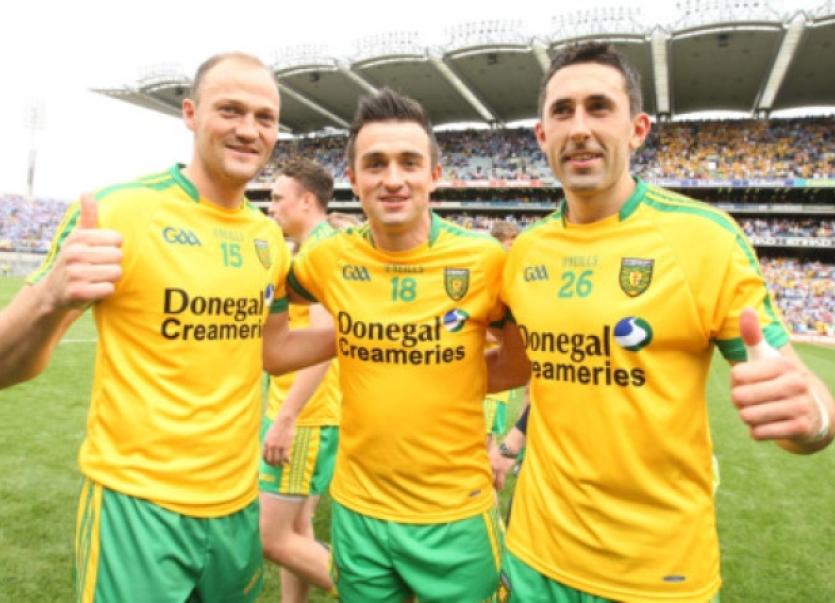 The greatest day ever for Donegal GAA! That line has been repeated up to six times in the last four years under the tenure of Jim McGuinness.

The greatest day ever for Donegal GAA! That line has been repeated up to six times in the last four years under the tenure of Jim McGuinness.

Winning back-to-back Ulster titles; the magnificent extra-time win over Kildare in 2011; beating Kerry, then Cork and Mayo to win the 2012 All-Ireland.

Then this year, winning back the Ulster crown and on Sunday last in Croke Park, both senior and minor teams reaching the All-Ireland final.

It was the most special day; perfect for football and a Donegal support who were as vociferous as I’ve ever heard in Croker. They played their part in the special day.

True, many supporters and those people who never miss a Donegal game, travelled with trepidation. They knew that if Donegal were ready for the fray, Dublin would be made work for the victory that everyone, outside of Donegal, felt was practically guaranteed.

In the pre-match press day, Jim McGuinness laughed when asked if he felt Donegal could give Dublin a scare. At 5 p.m. on Sunday evening, the answer was delivered.

In the aftermatch interview live with Michael Lyster, McGuinness gave an articulate and outlandishly accurate reaction to a match that had ended just minutes earlier. He talked about game plans and honesty and about never preparing for a game he thought he couldn’t win. “We will do the same for Kerry but then Kerry will come to Croke Park for the final feeling they, too, can win.”

The burning question now is, ‘what does Jim McGuinness have to make Donegal special’? The answer is simple: It’s his ability to get players to carry out the plan. I don’t think it is necessarily all about the plan. It is all about this ability that McGuinness has to get players to carry out their roles; to be leaders and be prepared to die for one another on the field.

The Dublin bandwagon was overhyped. They have some exceptional footballers - like Paul Flynn and Diarmuid Connolly. Joe Brolly felt only Michael Murphy and Frank McGlynn would make the Dublin team. It was a pity he was not asked on Sunday evening how many would now make the team.

While Brolly was one of the believers in Donegal, there were plenty of ‘expert analysts’ who were waiting to write the Donegal obituary. Many had been waiting for this day since the famous meeting of the teams in 2011.

Apart from those who just seem to have an agenda against Donegal (and a few against Jim McGuinness), it was as if it was just a matter of putting in the weeks from the beginning of the summer until the coronation of Dublin on the third Sunday of September. Did not our own Martin McHugh not say after the National League final that we should hand Sam to the Dubs (and save supporters the expense of travelling)?

Newspapers have pages to be filled and TV and radio studios have to churn out programmes, but as Jim McGuinness always says, nobody knows what is happening inside the Donegal camp, or any other camp.

Sunday’s performance was not a shock to the Glenties man. It had been planned; the formula for the kick-outs with the Glenswilly men in central positions and Odhran MacNiallais picking up ball on the wings; the creation of space in which to punish Dublin. However, it was the execution that was so composed; Ryan McHugh’s runs from deep; Colm McFadden’s coolness. It was just a special day.

To score 3-14 was also breaking new ground. It was our second biggest ever score in Croke Park and according to Edmund Brennan, it was also the first time ever we scored three goals at Headquarters! The only other time we exceeded the score was against Tipperary in the Qualifiers in 2003 when we notched 2-19.

The blanket defence was thrown off when needed and Donegal showed that they have plenty of attacking prowess.

I’m of the opinion that Jim McGuinness feels he needs that blanket defence for Ulster opposition but is able to bring other facets into play once he gets Donegal clear of the suffocating nature of Ulster football. No doubt the challenge within Ulster is much greater than any other province, but while you have to battle to get out, McGuinness was able to get his team to the next level.

Now he has just over two weeks to prepare for a horse of a different colour. Kerry are not lacking in self-belief. They are raised on an understanding that winning All-Ireland finals is their right of passage.

In many ways they were fortunate to get past Mayo, but you could also argue that they were the better team.

There is talk that Colm ‘Gooch’ Cooper may be ready to play some part in the final. It would make the occasion even greater if Cooper could play and certainly would add more tricks for the McGees to deal with!

No matter who plays, McGuinness will have his team ready. Kerry will come prepared also.

With the minors of both counties clashing in the curtain-raiser, it will be another special day for the counties who are furthermost from GAA headquarters.

The time will pass quickly until All-Ireland final day on Sunday 21st September!