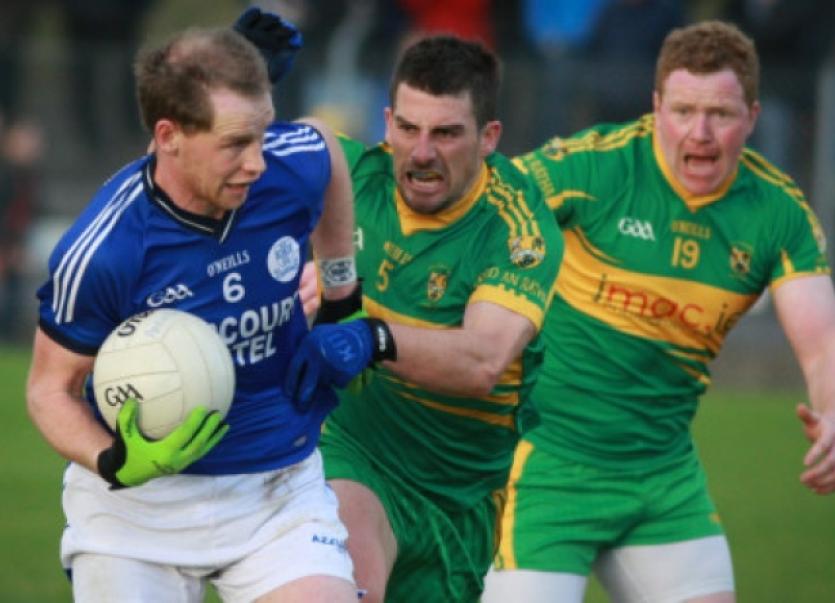 A late pointed free in injury time from Brendan McNelis gave Ardara a deserved draw in a truly frenetic finish between these ancient rivals at Tir Conaill Park.

A late pointed free in injury time from Brendan McNelis gave Ardara a deserved draw in a truly frenetic finish between these ancient rivals at Tir Conaill Park.

A draw was a fair result, but one suspects that Naomh Conaill will be the happier side after clawing back a five points deficit in the second half while playing into a tricky breeze.

It looked like Ardara would pull off a shock victory when they hit 1-4 in a golden opening 12 minutes of the second half.

Ryan Melly slipped home the goal from the edge of the square after he gathered a long ball from Kenneth Doherty.

And quick fire points from Shane O’Donnell, Gareth Concarr, Ciaran Breslin and Melly put them into a healthy 1-7 to 0-5 lead, after they trailed a wind assisted Naomh Conaill by 0-5 to 0-3 at the interval.

It looked bleak for the Glenties side who failed to take full advantage of the breeze in the opening half as Ardara started sharper and took the lead through Ryan Melly and Tomas Boyle.

But Naomh Conaill replied through man-of-the-match Dermot “Brick” Molloy who looked lean and mean and finished with six precious points.

Anthony Thompson had some brotherly telepathy with Leon and the latter arced over a fine score in a half where the blanket defence from both sides held sway.

Brendan McDyre and Leo McLoone were also on target for Naomh Conaill in a very evenly contested opening half. Molloy hit some superb points in this half but it was he and Anthony Thompson who drove their team forward in waves when it looked like Ardara’s goal might be the clinching factor in this typically hard fought affair.

Ardara lost Martin Shovlin who had come on for Kevin White, through a black card for a tackle on Brendan McDyre just before Melly’s goal.

Ahead by five points with 17 minutes left and with the breeze, Ardara retreated and Naomh Conaill laid siege to their goal for the remainder of the half.

Ardara could only manage two more points from Gareth Concarr and the late equalizer from McNelis even though they had the breeze.

Points from Molloy and an equalizer from Marty Boyle in the 28th minute brought a big Glenties cheer.

And it looked like Anthony Thompson had secured victory for them before McNelis’s vital leveller in the second minute of injury time.